Reverend And The Makers are making something of a resurgence. Having initially come to the forefront in 2007 with the classic single ‘Heavyweight Champion Of The World’, the band currently find themselves headlining the mid-sized festival circuit with an ever growing fan base. We caught up with frontman Jon McClure and his thick Yorkshire accent ahead of this weekend’s headline slot at Strawberry Fields Festival. Jon is in good spirits about pretty much everything, apart from pretty females shitting in public  and Radio 1… But more on that another day.

Gigslutz: What are your festival essentials?

Gigslutz: Basic but effective! Ok, so you are headlining Strawberry Fields Festival – what in particular are you looking forward to about this one?

Rev: Just playing really. It’s going to be a great atmos. We’ve obviously got a good billing which is great and there will be good vibes man. I’m not into all these so called trendy festivals. What’s trendy now anyway – what is ‘cool’?  There is a charm about the smaller festivals. We played Splendour festival recently and it was great – mad crowd. I’m more into that then these corporate festivals that are sponsored by warm pissy lager.

Gigslutz: Agree. If you were in charge of the bookings what would be your dream festival line up?

Rev: Ok I’ll go Sly and The Family Stone. I’ll make them sort their shit out and get ‘em on the stage. Aretha Franklin too lets get her on. She doesn’t fly does she, so I’ll make Aretha fly. Sleaford Mods – they’re the best thing to happen to music in a right long time, I think they’re amazing. Also Professor. He’s brilliant, he plays all these deep house African beats. He’ll headline the dance tent and fuck people up man. Check out his track ‘Fingers’, it’s brilliant.

[Thinking out loud] Who else… I may have Prince – get him to jam with Sly, that’d be good. Funky shit. Jimmy Cliff, let’s get him on and something more contemporary. Peace – I like them, let’s get them on and The Jesus & Mary Chain are playing again aren’t they? Let’s have ‘em.

Gigslutz: Your festival is going to be proper trendy!  Moving on – what is the best and worst thing ever happen to you at a festival?

Rev: Ok, the worst one was at Glastonbury. It was years ago – I was about 16 and it was one of those years with all the mud. Me and me mate thought we were being right cool and put our tent at the bottom of the hill as close to The Pyramid as possible like, and of course it floated away in the mud. So, we’re off our nut looking at it floating away and thinking “fuck, we need somewhere to sleep”. Then we see this beautiful girl who’s stood there by her tent. She’s stunning right, Meg Ryan looking, I’m walking over about to ask her for a place to stay, when she squats down and starts having a shit in the middle of the field. It was terrible – I could see it coming out and everything.

The best would be T in The Park this year. We played the Radio 1 stage right, and I’m not into Radio 1 at all, I think it’s like fucking Blue Peter… Anyway we’re on in the middle of the day with all these acts that are getting played constantly every day on Radio 1.  And guess who got the biggest crowd of the weekend – us.  It was like a moral victory…

Also Nottingham this summer, we played a festival called Splendour festival, which was mad. A top little festival.

Gigslutz: Class. So what can we expect from you at Strawberry Fields?

Rev: PARTY! Just a party man! We used to be all deep and meaningful. I had a bit of a drug problem and I was getting all political too – you can’t have both! Now we’re just all about party and we’re loving it. It’s always brilliant as long as our crowd don’t smash the stage up or something. They’re a rowdy bunch. Graham Coxon couldn’t play [at Hyde Park] as some of our fans smashed the stage up. But yeah, bar that – party!

Gigslutz: Nice one! So after Strawberry Fields what is next for you?

Rev: In October we’re gonna play the first two albums over two nights. That’ll be a celebration of ten years. Then we’ll put a lid on that and put out a new record which I’ve recorded called ‘The Trip’ at Jamaica (the studio, not the country) in Sheffield. It’s something we’ve never done before – no synths or anything like that. We’ve done it with Alan Smyth, who write a lot of the early Arctic Monkeys demos with them – he’s known as “the Godfather” round here. But the new one – usually I send something to the manager and they say “do this” and “change that” but with this one he just said “get in there and record it as soon as possible”. It maybe not my masterpiece but it’s pretty fucking special and I’m really excited to get it out as soon as possible.

We might also do one big gig, like the Courteeners did at Castlefield Bowl. I think we could do something like that. I’m feeling confident man, it’s just good to be alive…

Reverend And The Makers headline Strawberry Fields Festival this weekend. You can buy tickets here 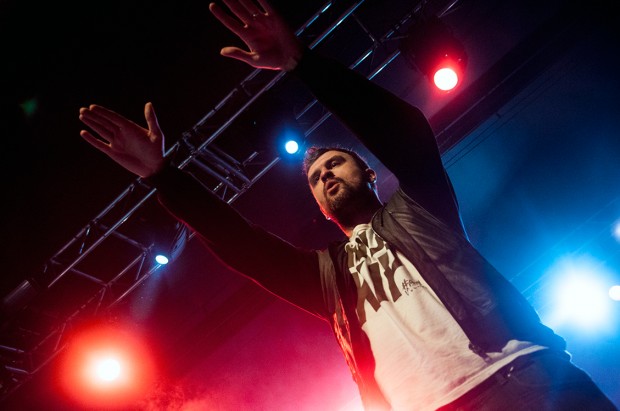 Interviews Slider
reverend and the makers

WATCH: Spoon perform new track ‘Do You’ on US TV show