You guys played The Legitimate Peaky Blinders Festival yesterday, how was that?

Jordi: It was weird how the stages were set up but yeah it was cool, the stage was crazy. We played the BBC Introducing stage, it was pretty mad having everyone dressed up, even the security guards were. But we didn’t dress up, we came very unprepared.

Reece: I took my hat but I only put it on after we played…

Jordi: If someone had offered me a hat I would have worn it but sadly not.

How did you get on it?

Jordi: Basically Steve Knight, who writes Peaky Blinders, my granddad is really good friends with him. So we’d been to a few of the Birmingham games with him when I was 5 or 6, but then recently it was his 60th birthday party and my Granddad was going and he took me along and we were like… here’s our EP.

Your music is more of a mellow, shoegazing vibe, what influences it?

Jordi: We listen to a lot of different stuff. In our opinions, we don’t think each of our songs are that similar. But at the same time we all listen to a lot of jazz and recently a lot of punk. And 60s psychedelic like Pink Floyd. A lot of the sounds we used are 60s guitar, but we’ve added in more synths are things recently.

You’re going on tour with This Feeling, is this your first proper tour?

Reece: We’ve done a sort of tour with This Feeling before but it’s been smaller.

Jordi: But this is definitely the biggest tour we’ve done.

Where are you excited to play?

Reece: I’ve never been to Cardiff so I’m looking forward to that; we have a lot of mates up there. And Glasgow again, because we did it once before and it was really good.

Jordi: Yeah everyone’s really nice in Glasgow, excited to get back up there. 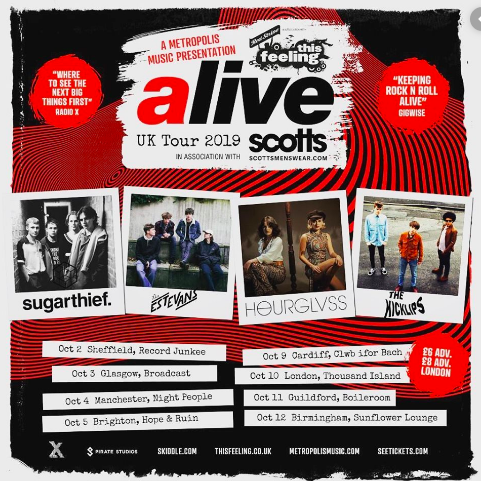 NEWS: INXS LIVE BABY LIVE – IN CINEMAS FOR ONE NIGHT ONLY

This Feeling Track of the Day: Spyres ‘Otherside’