With The Rifles debut album turning 10 and a Camden residency in full flow we caught up with lead singer Joel Stoker for a quick catch up before he joins the rest of the band on stage at the Electric Ballroom for a sold out Friday night show.

First of a 4 gig residency last night Joel, how did it go?

Yeah it went really well, it was nice to get it out the way to be honest. The gigs have been booked in for quite a while and we haven’t played together for a while because our bass player lives in Germany so it’s limited time to get together and rehearse.

But as I say it was good to get it done but went really well plus it was nice playing the old stuff.

Yeah last night was just under capacity and the next 2 nights are sold. Then we’ve got next week as well so it’s all good!

So it’s 10 years on from the seminal album, ‘No Love Lost’, what’s it like digging out some of the tracks that might not be included in a traditional Rifles gig?

I’d say a good half of that album has always been in the sets but we’re including some of the b-sides and some of them are tracks that we’ve never played before so we literally had to get together, learn them and rehearse them like new songs but it’s good to get to play them.

It’s quite an upbeat album and the b-sides are heavier than some of the tracks that went on the album, it’s probably our fastest album, so playing it does take it out of you but it’s all good man. 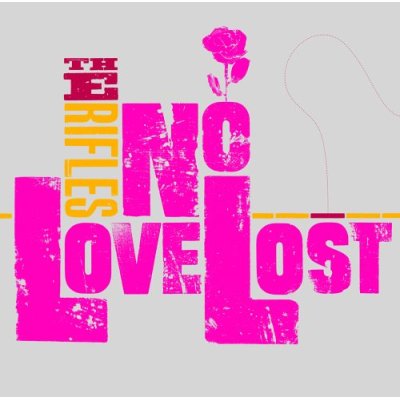 The album itself has had the Abbey Road treatment and been remastered for the 10th Anniversary at the iconic studio, did you guys get involved and get hands on with that?

Yeah we got involved by just going up there and having a walk around Abbey Road Studio, then the man who knows what he’s doing dealt with it.

So your first ever gig together as a band was at The Bull & Gate in Camden and I presume it’s no coincidence the 10th Anniversary is being celebrated in Camden, so what does this place mean to you lads?

For most bands Camden’s got the big music scene. It used to have a lot of smaller venues for bands such as the Bull & Gate and the Dublin Castle but a lot of them have gone now. When we started out places like that was where bands went out and played, plus Luke’s from round this way. We played this venue, the ballroom, early on as well which was good. It’s the perfect size for us, it’s around 1,200 so a decent size but still feels like you’re playing a small venue.

Do you still see the regulars down the front 10 years on?

Yeah you do and we’ve become mates with a lot of them, it’s nice to get to know them just from playing. We’re at a level where we can still play a gig and then go and chat to some people in the crowd afterwards, that means a lot to us and I’d be a bit gutted if we ever lost that.

So the story goes that you and Luke were at Knebworth watching Oasis and decided you should make some music after meeting at music college?

Yeah we both were at that gig and then we met at college a few weeks after. We were at a music college and the majority of the stuff wasn’t really for us but me and Luke clicked straight away. We didn’t finish the course and left after a year but we made a band from it so it’s all good.

With ‘None the Wiser’ being the first time the original band had been back together for a quite a while I guess that was a good feeling and quite nostalgic?

It was strange because we always used to rehearse at The Premises on Hackney Road but we stopped going there and we went to a place in Walthamstow but when it came to rehearse for the fourth album, with the original band, we couldn’t get the new place in Walthamstow so we basically went back to the room where we very first started, it was mad. We were all back together in the very first rehearsal room where it all started which was pretty cool but after about half hour it just felt normal again.

The friendship between yourselves and Paul Weller is well documented with you both joining one another on stage. What’s it like becoming friends with someone who is cited as such a big influence?

Weller’s been great to us, he’s let us use the studio to record the new album. It’s weird because it isn’t quite as daunting as it was because you get to know him a bit better.

So there is new material in the pipeline? And with the success of the 4th album is there a want to kick on from that?

I don’t know if it’s like that because we just write what we write and that’s what comes out but we want to try and get a bit more a live sound with the new album,but we’ll see what happens. We’ve already recorded about 8 tunes.

What’s the song writing process like amongst the band?

There’s 3 ways we do it. I pretty much write at home and then demo the song and bring it to the band and Luke would do the same, or we’ll have a bit of a jam in the practice room and I’ll take it away and write some words for it. But it can all be a bit random and we just do whatever works at that time.

Given ‘No Love Lost’ has been remastered and is now 10 years on is there anything you would change on it?

I hate the way I sing on the first album, I can’t actually listen to it but it is what it is. You can’t change it so there’s no point driving yourself mad about it.

Deluxe edition of The Rifles’ debut album, ‘No Love Lost’, is out now on Cooking Vinyl