This weekend will see two cracking This Feeling club nights in Manchester and London. 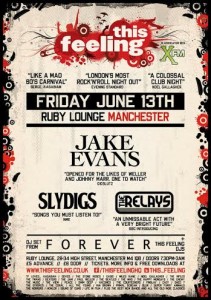 e The Ruby Lounge in Manchester taken over. Guitarist Jake Evans who is a rising star in the world of music and has previously opened gigs for Johnny Marr and New Order will headline the 60s themed nights. Evans will see support come in the shape of the brilliant SLYDIGS, who are a four-piece collaboration with a heart filled of rock ‘n’ roll.

The Relays will also be supporting Evans, they’re obsessed with blues and rock ‘n’ roll. The four piece formed in 2008 on the influence of Dylan, The Beatles and The Stones so make sure you don’t miss ou on them…

The night will also see DJ sets from FOREVER as well as TF DJs and Gigslutz very own Amelia Ward. Bang the DJ indeed!

The Queen Of Hoxton in Shoreditch is the venue to head to on Saturday night. With England set to kick their World Cup campaign off tomorrow night, don’t let that deter you from going to This Feeling as they will be showing the match live at their gig in London’s Queen of Hoxton. Sound.

Jake Evans will be headlining again, alongside Sisteray who are a mod revival band, drenched in rock ‘n’ roll with a punk twist they are sure to be a worthwhile addition to the bill. And the line up is complete with three piece band, The Tennysons from Leicester.

DJ sets will include Rocket & Dev from Soccer AM, Dexters as well as 90s MIke & She Bangs The Drums.

To purchase tickets or for more information go to www.THISFEELING.co.uk 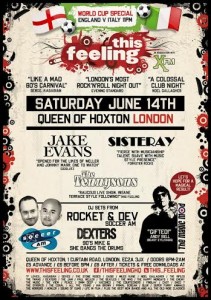 Previews
jake evans Sisteray The Relays The Tennysons this feeling

Unsigned Act Of The Week: Pony And Trap

Tracks Of The Week Playlist! May/June 2014