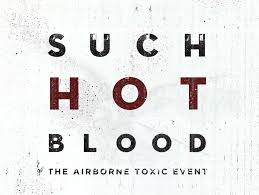 “Do you drink to forget or do you drink to remember?” The gritty and ashy vocals of Mikel Jollett fulfils the dark ambience that ‘Secret’, the first track off their album ‘Such Hot Blood’ signifies for The Airborne Toxic Event. ‘Secret’ illuminates the story of a broken heart as Jollett warbles, “She left you, she left you”

This album exasperates the US Indie Rock band’s archaic lyrical use, with songs such as ‘What’s In A Name’ and ‘The Storm’ complimenting just this. Deriving their name from Don DeLillo’s 1985 novel White Noise with a story line that involves a poisonous cloud that erupts after a chemical spill from a railcar, their overwhelming depth of emotional content within their album accompanied by orchestral power describes the emotive partnership TATE want to create with their fans and listeners.

TATE’s ability to express a story is recognizably one of the aspects that separates themselves from the other participants in the “archaic structure of a worldwide major label system” as Jollett explains about the music industry. From the high power starter ‘Secret’ filled with resentment and agony from a throbbing heart of a lost lover, the album progresses with an almost heart warming happy ending. The soulful orchestral start of ‘Bride & Groom’ illuminates the expansion of TATE’s talents, the follow up ‘True Love’ takes the listener on a journey through love, pain and healing. The soft vocals of both Jollett and Anna Bulbrook compliment the joyous light strings of Steven Chen and Noah Harman with the background melodic orchestral sounds completing the jigsaw puzzle, which is ‘Such Hot Blood.

Whilst listening to this album, you are unwittingly seduced by the story unfolding in front of your eyes, which characterizes The Airborne Toxic Event beautifully. With help also from Jacquire King, their mentor and friend who is a three time Grammy Award-winning producer and songwriter – who has worked with Kings Of Leon and Of Monsters And Men – it is no wonder why their third album reached No.1 in the US Alternative Chart on iTunes.

‘Such Hot Blood’ will be released on October 7th and their hit track ‘Timeless’ is out now.

Here’s a fan’s eye view of ‘Timeless’ recorded in NYC.

The Lucid Dream – ‘Songs of Lies and Deceit’ Album Review