US rock record breakers begin their UK takeover, with a little help from a Beatles mash-up.
Rating:

Brothers Dylan, Daniel, Jesse and Johnny Kongos make up this alternative rock outfit, who lit up the US with their single ‘Come With Me Now’, and in the process became the fastest debut artist ever to hit the top spot on the Billboard Alternative Chart (beating Lorde’s record). Following the release of their album Lunatic, the band embarked on a two-show stop off in London, with support coming from Racing Glaciers, in an attempt to announce themselves to the UK.

With a relatively sparse crowd for a band who have had such recent success across the Atlantic (which has also include gaining 5 million views on their single ‘Come With Me Now’), the show began at a fast pace with drummer Jesse Kongos taking lead vocal duties before handing over to brother Dylan, who seemed so comfortable in his surroundings that he had decided to perform for the entire duration of the show barefoot. One thing that makes KONGOS stand out as a band is Johnny Kongos, who not only has a masterful and well kept Goliath of a beard, but also plays the accordion! Whilst Mumford & Sons have got the banjo look wrapped up, KONGOS could easily forge themselves the title of leaders of the alternative accordion-rock scene. 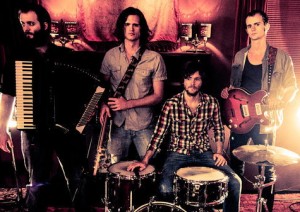 Standout tracks on the night included ‘I Want To Know’, with its sing-along chorus and reggae beat offering a different side to a band whose general sound is much more Black Rebel Motorcycle Club than Bob Marley, and ‘I’m Only Joking’, which is a dark sounding, radio-ready track that grabs the ears of the listener, with its eerie sounding chorus making it easy to see why the track was released as the debut single from Lunatic.

Not content on simply playing their own material, the band brought their friend Moezart out onto the stage and performed a brilliant collaboration of The Beatles’ ‘Come Together’ and Dr. Dre and Snoop Dogg’s classic ‘Nuthin But a G Thang’. The fab four’s lyrics were diced up with the high-pitched classic Dre keys, accompanied by Moezarts clean and technically precise rap, which was clearly influenced by rap legend Eminem and almost became a Stars In Their Eyes tribute performance dedicated to the Detroit rapper in sections.

Ending the night with their biggest success to date ‘Come With Me’, which has gone Gold in America and Platinum in Canada, meant that the crowd in attendance left on a high as the band confidently and assuredly played the catchy and energetic offering to within an inch of it’s life. KONGOS seemed intent on planting the chorus into the brains of the audience so they would be humming it all the way home!

On the basis of this show alone, KONGOS have some way to go if they wish to crack the British alternative scene, and at this point in time seem to be focusing most of their attention on improving their standing in the US with a support slot for Kings of Leon on their enormo-dome tour. However, if KONGOS can produce tracks with the quality and regularity that they have on Lunatic, and with a few more intimate shows to showcase their vast talents to the UK audience, there is every reason to mark these guys down as one to watch!

Live Reviews
Come With Me Now Kongos Tram and Social