Liam is back! After months of speculation and hints at new music, Liam Gallagher has today announced details of his first ever UK solo tour. Full dates and ticket details are below.

As well as the tour dates, it is confirmed his first solo long player is set for release this October and fans can pre-order his first solo track ‘Wall Of Glass’ HERE.

Liam’s first solo show will take place in Manchester next week – with all profits from the opening homecoming show going to the We Love Manchester Emergency Fund, in the wake of this week’s terror attack at an Ariana Grande concert. 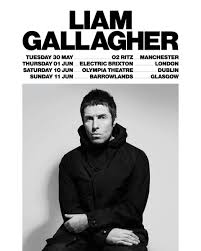 *PREMIERE* This Feeling Track of the Day : Mint ‘Hypoallergenic’