Little Boots appears from on the stage in her high heels. She’s wearing black sparkly tights and a black top with a long voile that looks like a fairy cloak. She is as charismatic as Morgan le Fay and as soon as she enters the stage, Heaven, where the concert takes places, explodes. 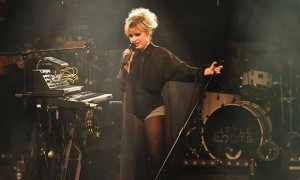 After releasing her debut album ‘Hands’ in 2009, she is now touring to promote her second effort ‘Nocturnes’ (2013) where most of the songs she plays at Heaven are taken from. Accompanied by a special band made of a bassist, drummer, two choristers and a DJ/guitarist, she gives voice to her music, contaminating her dance/electro-pop music with rock echoes that make her songs even more powerful and appealing. She widely interacts with her public, inflaming the fans and mixing with them when she comes down the stage so that the whole Heaven turns into a dancing and jumping human wave.

The concert opens with ‘Motorway’, which is only the start of a crescendo of dance pop sounds, excitement and colourful lights ballet which are able to transform the place into a crazy dance floor at least for one hour and a half. Followed by her faithful musicians and the fans who shake their hands and bodies to the rhythm of songs such as ‘Broken record’, ‘Confusion’ or ‘Every Night’, she’s able to carry the show to a point of no return. As soon as the fans recognize the intro of ‘Stuck On Repeat’, her very first single back in 2009, the die has been cast and a chorus starts loud from the stalls.  Then she plays some more songs, like ‘New In Town’ and ‘Satellite’: the atmosphere is red hot and fire burns in everyone’s body, but suddenly the lights are turned off. Only for a few minutes. Little Boots comes back in a cute white dress, she looks like a little princess now, while she’s singing ‘All For You’. But this is not the end. Not yet. There’s one more thing to do: shaking body and singing along with her. That’s ‘Shake’ and her white dress turns into a show itself. Designed by designer Michelle Wu, it’s made of lights that change colour and turn on and off to the song’s beat. Sometimes the word ‘shake’ appears on it, reminding everyone that they are there to enjoy music and life, it is absolutely forbidden to stand still.

Now the show is definitely over. Yet, while going back home you can’t help going through the light show experience and keep singing in your mind ‘Shake nanananana shake!’.

View all posts by Marcella Sartore →