It’s the time of year when the child of the gawpingly impressive Arcadia spider skittles over from Glastonbury (or wherever it takes shelter) into the pearly gates of London’s Queen Elizebeth Olympic Park.

It’s the weekend that fills the overground with shit-shirt-wearing ravers and echoes with excited exchanges: “Arcadia crew?” “Hell yeah!”. Much like Glastonbury itself, the festival’s sole inspiration is recycling with an artistic twist.

Anyone who has danced beneath the monster that is Arcadia, or been lucky enough to experience Glastonbury, will know the type that rave dusk till dawn, the grounded, hippie type that do nothing but good for our earth. It’s these guys who clambered upon the installations, drove mini spiders through the air, who hung from ropes and who had brought their positive ethos to London.

Saturday marked the day of all things tech-house and techno, matched with the blazing sunshine, it was a match made in heaven. If there’s anything that suits techno, it’s heavy-weight, industrial installations, made from repurposed military hardware. Max Cooper had brought ethereal vibes with Balearic beats, weaving in hair-raising, intricate drops as the troops stomped along beneath. 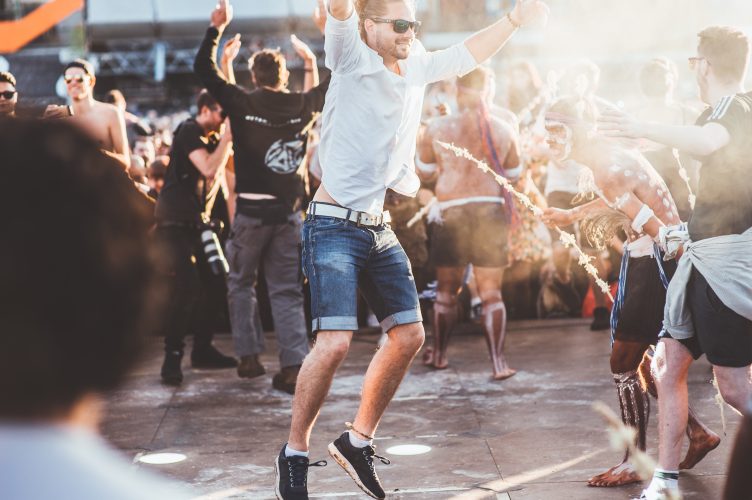 Beneath the wings of a hand-crafted beetle on The Bug stage, Riva Starr’s ‘Can You Feel Sunshine’ had boomed through the ever-growing crowd, which heaved full of creatives from all ages, from 18 to late 60’s, dreadlocks to short-back-and-sides, Arcadia is a festival for all.

The Reactor was a contrasting experience. Inside the walls of the tent, a sculpture that could have been picked from Dubai’s city was the epitome of rave. As Paul Woolford finished with piano-infused disco, the mood had taken a dramatic psy-trance turn, a flood of intense, neon lights blitzed around the tent as samurai-esque dancers in masks twirled around ropes metres above the sea of groovers.

Like any festival that prides itself on all things electronic, it’s roster wouldn’t be complete with Cocoon had honcho Sven Väth, who played his usual blend of buoyant world music into industrial clangers.

As day turned into night, more fire had breathed through the eyes of Arcadia, more installations hung from crane-like spider legs and the night-people found themselves in paradise. Whether or not any after parties were on the agenda, sleep was to be had for anyone returning the next day…

At a time when the worry of our environment is an added weight on our shoulders, it’s a breath of fresh air to dance to the pleasure of the creators, who with our earth at the top of their priorities, have for the last ten years brought the 50-ton spider and his alias’s to London. With a two-day electronic binge journeying through the best in house, techno and DnB, Arcadia will continue to give us a taste of Glastonbury’s magic every year.