For many people the thought of a British Festival is mainly about a few things: Music, rain, wellington boots and mud. Now that’s fine if it floats your boat however, for those that prefer the finer things in life (like beautiful warm weather and NO mud) then Benicassim is one of many festivals that is based in foreign lands, and quickly becoming competition for British Festival organisers. Benicassim (AKA Beni) is based in Southern Spain and is normally a small holiday resort; I have been twice now and can confirm the location is nothing short of beautiful. The Beni campsite is open for a massive eight days, which is plenty time to enjoy the hot weather or perhaps top up the tan.   Because the weather is so reliable the organisers can have the event at night, so the day is yours to be a tourist, enjoy your hotel pool or hit the beach. Then around 8pm you head up to see the festival kick off, and it’s still shorts and t-shirt weather at night by the way!  The fistula runs for four nights and with many ticket options available it is frankly a bargain at £120 including camping.

I managed to catch these acts while I was out there;
Tinie Tempah 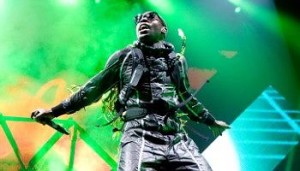 “BENNICASSIM!” yells Tinie Tempah, as he emerges from side stage to a rapturous audience Opening with ‘Lover Not A Fighter’, his energy was immediately apparent. Tinie has some massive hit songs in his setlist, however there are quite a few that are only known to the die hard fans. During these tracks it was hard for me to keep up with his energy (not being a die hard fan myself), however he made easy work of keeping the attention of the crowd. I would not personally class Tinie as a rapper – he doesn’t have the flow for that. He has massive weight behind each chorus to fuel his songs and the crowd, when the energy dips he will give many requests to wave hands in the air and will also rely on a little help from his DJ. Having said that this was a huge set of the festival, no doubt.
Chase & Status 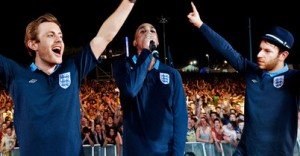 Well – this came along and blew Tinie Tempah’s set into smithereens. Perhaps the laser show did that all on its own, however the huge set list made sure with a stamp of authority like I haven’t seen before. The main stage was absolutely packed out; Beni has a particularly loud sound system which is perfect for there style of gritty drum and bass. Chase And Status have a vast array of collaborations, two of the biggest with Tinie Tempah making an on stage appearance. The other was with Plan B, who was displayed on a projection screen to perform ‘Pieces’. This was an epic way to end the first evening of music on the main stage.
Albert Hamond Jr. 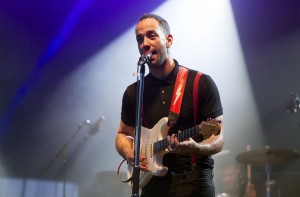 Have you heard of The Strokes? If not perhaps you need to come out of that cave. Anyway, their extremely talented guitar player is Mr. Albert Hamond Jr. His new wave of music is still for fans of The Strokes, and possibly fans of other American indie rock and roll outfits, for example the Red Hot Chilli Peppers. The man easily proves in his live set that he is in charge of his band, he can play with extremely high skill levels and that he can work a crowd. To quote my friend that was with me at the time, “the man is a machine”. He made a lot of effort to interact with his audience and came across as a really nice bloke. A quick look at his social media outlets confirm this.
Jake Bugg 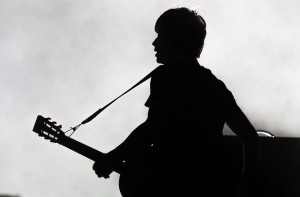 The 19 year old guitar player is causing all sorts of storms within the world of commercial music right now. He is heavily influenced by artists like Bob Dylan, Johnny Cash and Donavan. These are obviously massive names to live up to. Jake has a swagger about him, its like he listens to the aforementioned artists for musical inspiration but watches guys like Paul Weller or Liam Gallagher for performance inspiration. Either that or he is one cool 19 year old. From where I was standing he was getting a lot of stick for not being very into his performance or for not having energy, and I couldn’t help but leap to his defence. As far as I can see we know that Jake is a massively talented guitar player, and his band are amazing as well. He is only 19 years old, so to be on that stage in front of that many people and sharing it with so many huge names must be beyond nerve-wracking. I have seen Jake play a number of times now and this was by far the best I have seen him play his guitar and sing. If he needs another year or several to have more stage presence then I say we should allow him to grow naturally. Who knows, we may end up with the next Dylan.
Kasabian 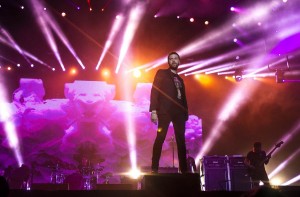 I won’t spend much time on this. It was loud, it was bouncing, it was banging and it was what Kasabian do best: Headlining. They are not a band I personally listen to on record as it comes across as a bit fake for my personal tastes, however in this format, live in front of 50,000 people, they are awesome!  Especially when the beat drops in ‘Switchblade Smiles’, that will lift your feet.
The Libertines 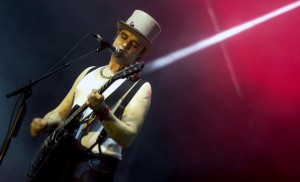 This was possibly one of the craziest shows I have been too. At the risk of upsetting A LOT of people I will keep this brief as well. I know the things I’m about to say are what we expect of The Libertines but I do have to ask why… They were so drunk (I presume) that they could hardly stand, they couldn’t play simple chords without screwing them up, the instruments were out of tune, and they more concerned about kicking the mic stands over rather than singing into them. Pete Doherty actually fell poured liquid all over his own amp and then fell over it knocking the whole stack down. The crowd cheered but is this cool… Really? Having said that they do still have the songs – no getting away from that, I just feel its a real shame that a band that cannot be arsed to put on their best performance should be headlining a stage at this size of festival. We should expect better… If that was Liam Gallagher he would be in the papers for it.
Lily Allen 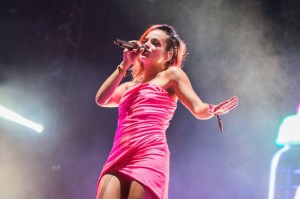 Our wonderful Lily Allen. Lily has it cracked! She is the girl that other girls want to be and that guys want to be with. Her tunes are bang average pop songs sung in a nice way, but Lilly acts more like a rock star than a pop star. She is not afraid to get on any topic in front of many thousand people. Aside from the polished performance she discussed several “wanker” politicians, her husband (who got a massive boo!) and also her camel toe situation. Fair enough. All in all a very expected, good performance.
Paolo Nutini 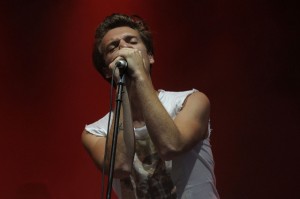 Without out a doubt the most important artist at the festival the entire weekend.  Where do I start..? Paolo had a new album out recently which has went in at number 1. His other two albums have also once again climbed the charts to high ranks. Excellent! So this tells us that the general public love his old material almost as much as his new material. Well some people reading this may be disappointed to read that he has changed almost all of his old songs away from their original style to match his new album. “Oh dear,” a lot of you may be saying, I mean its a pretty bold move on that risky third album to change the live set in such a dramatic way.
Fear not, his voice has grown with his music. The amount of influence he has taken from Sam Cooke is frightening. Paolo has always been a good singer, no doubts about that, one of the best in fact, but his soul has grown with his new record and new live set and it is simply stunning. The song ‘Iron Sky’ is so moving that the capacity audience at Benicassim ground to a halt in amazement; Nobody else right now could have performed this better. I was standing with 4 other people when Paolo announced his last song, at this point we all checked our watches because we all believed he has only been on for a matter of a few songs. The set flew by and we could have stood and watched it all night. This was the best live performance I have seen in years!
Once again I would like to take my hat of to the festival organisers – they are swift and efficient and are only seen and heard if they are needed. This gives the impression it is OUR festival and not theirs and it works, people can cope with this just fine. Such a great atmosphere and I shall be returning again!

View all posts by Jack Rowberry →

EP REVIEW: Dumb ‘Chew Me Up, Spit Me Out’