We set off to Boardmasters not really sure what to expect from it, as some have previously said it’s a really “chill” festival while others claim it’s basically a three day rave, but we arrived on Friday and instantly, you could tell that it was going to be a great weekend. The actual festival was surprisingly large, and the campsite was far enough from the main arena to be able to not have constant music in your ears when you wanted some quiet time in your tents, but wasn’t far enough to be an unpleasant trek… Also, the general atmosphere around the festival seemed to be really good, with the unsightly, violent people at a minimum. After moving our tent a fair few times, we finally settled and set off to the main arena to begin our festival. 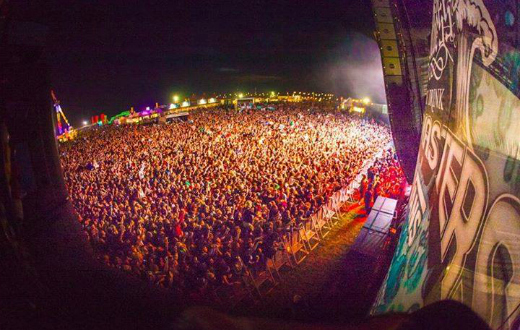 The Enemy were the first band we saw on Friday after traipsing around the media area for an hour or two (there was free cider, who can blame us..?), they completed the job of fully awakening the seemingly groggy crowd and Tom Clarke seemed to be genuinely humbled by the great reaction from the crowd after their set on the main stage which, admittedly, wasn’t all that bad. After this, we headed to the Mavericks tent to watch Big Deal, a fuzzy band that offer sweet melodies, and we weren’t disappointed at all – we also managed to catch them watching The Cribs on Saturday, but more on Saturday later. 30 minutes after Big Deal finished up, Darlia arrived onstage and went straight into grunge-y opener ‘Blood Money’. Darlia themselves were fantastic for the duration of their set but the majority of the crowd seemed to be quite lukewarm towards them, with very little movement going on in the area in which you would expect a lot of moshing, especially with a band that tends to have heavier moments in their songs like Darlia. Next up for me was a mad dash to the main stage in order to get a good spot for Chase and Status… I feel like now is an appropriate moment to praise the sound at Boardmasters; many outdoor gigs and festivals lack a bit in the sound area but the sound at the main stage was fantastic, you could literally feel every bass drop during Chase and Status’ set. Chase and Status finished and back to the Mavericks tent it was for the band I was really looking forward to – Palma Violets. After what seemed like an age of watching them soundcheck their own instruments, they finally got into it and didn’t look back for one minute. Everyone in the crowd knew every word to the songs from their debut album, 180, that they played and fan girls (and boys) were in full force, with screams of “OH MY GOD CHILLI”, “CHILLI, I LOVE YOU” etc. being prominent throughout the manic hour that they played, but the atmosphere for this was probably the best it was all weekend. Best band of the weekend right there.

So, Saturday came and I wasn’t filled with too much excitement as there was only one band I was hell-bent on seeing and that was The Cribs but nevertheless, we went on with our day with the buzz that being at a festival can give you and saw a band called Tides (horrendous, inoffensive indie pop) and another called Life (fairly punky, enjoyed them a lot and the frontman has a lot of charisma) at the Mavericks tent on Saturday afternoon. We then drifted off to the main stage and saw Bipolar Sunshine who I liked quite a bit, he had loads of catchy songs that I found myself singing along to even though, prior to that day, I’d never heard any of them. The Cuban Brothers were up next and simply put, they confused the shit out of me… One of them stripped naked during the rain for reasons unknown and I’m not exactly sure what they did up on stage apart from star jumps and make weird noises but hey, all part of the festival spirit I guess? One of my favourite bands made their way onto the main stage after and The Cribs did not disappoint in the slightest. Their set was filled with all the songs that lots of people know and love and they appeared to give it 110% even after ten years of gigs and festival appearances, ‘Be Safe’ live is something that everyone needs to see. Hurricane Bertha began to make an appearance at Boardmasters after The Cribs left the stage but the heavy rain and wind did nothing to dampen the spirits of the crowd at the main stage, who were treated to a DJ set from Zane Lowe; there’s not much I can really say about a DJ set apart from the fact that he played tune after tune, so no complaints there. Up next: Snoop Doggy Dogg (10 points if you didn’t read that in the tune of the song). There’s a fair few worse things to be watching than Snoop Dogg when you’re freezing cold and wet with wind violently attacking you, but I still wasn’t a massive fan… Was good fun though and provided a few singalongs, everyone loves those.

Sunday arrived, we went off to the main arena early but then we got the news from one of the stewards that the main arena is being assessed due to the damage caused by Bertha so it wouldn’t open until 12, if at all. This heavily disappointed Harry and I because it meant that we’d miss out on a day of seeing Catfish and the Bottlemen, Peace, George Ezra and Bastille but we powered on after getting the news of the cancellation and managed to thoroughly enjoy our last day at Boardmasters Festival, mostly because of the silent disco – it was incredible! Loads of people seemed to share our spirit which led to a really entertaining atmosphere around all the campsites, everyone just wanted to party in spite of the hurricane. Also, I feel like Boardmasters dealt with having to cancel the Sunday really well so props to them for that and for being the hosts of an amazing weekend.