The Deer Shed Festival is a music, arts and science festival based at Aldersbury Park, near Thirsk in Yorkshire. It was started by a group of friends who all have kids and wanted to create a festival that would be fun for them. This years theme for DS6 was Up in the air and there were plenty of child created bubbles floating past in the sky but due to the mass mechanisms of global film merchandising the theme could just as well been Spiderman. 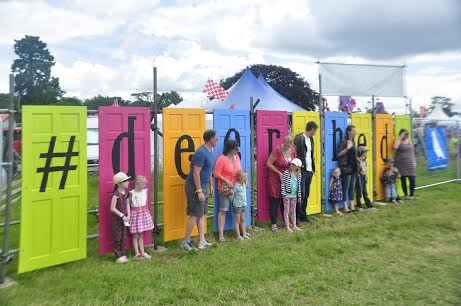 So here I am a childless southerner at the kiddiest festival in the land. Good job I like kids. My companion has introduced me to her Leeds friends and their children. A lovely bunch who allow me to see the festival through the eyes of the many children who outnumber the adults. This means an excuse to show off my paper aeroplane making skills. The science tent is astounding – we were shown a cloud in a bottle by the met office, a little girl was given a cape, laid on a table and transformed into a superhero with tv trickery. Kids were making robots out of old computer parts, hacking minecraft, making music on Ableton, soldering electronic units. This was only the start, there were activities and workshops for all ages, music, circus skills, sports, sports with a twist like Kidditch. All were really well attended and buzzing with activity and I did get to make my paper aeroplane. It is undoubtedly great fun to be a kid at this festival, but what about the adults?

The music and talks programming provided some truly adult pleasing moments whilst teenage sons looked on and learnt a thing or two. Billy Bragg’s talk was especially entertaining, it was surprising to hear him offer up Grime artists as the next generation to pass over the baton of voicing their peers issues and political concerns. He shared many funny anecdotes, a lot deriding himself and of course veered deeply into politics. It was great to see a 14yr old asking him what he thought about the stick he got for voting Liberal. Another example of how engaged the young are at this festival.

The other side of the story for adults here is that we are all kids at heart and we got to engage that side, many parents had accompanied their kids to Sam, Sam the bubble Man’s show but ended up loving it too. Sam was unsurprisingly a big hit and for his finale he pulled bubbles over children of ever increasing size. For the older kids and the adults Shlomo walked the line nicely with an intriguing beatboxing masterclass which engaged adults and children alike. He got the whole crowd involved and then got some lucky kids up to perform after some quick lessons.

A lot of the music did seem aimed at pleasing the Dads with some searing guitar music or gentle folky tunes. The Wedding Present were a nostalgic treat for some, they certainly packed their tent out, some grumbled they should have been on the main stage. The Villagers didn’t seem to have any songs that sounded particularily different from their current single – ‘Everything I am is yours’, but they have a good thing going, and they played a pleasing early evening set. The saturday headliner John Grant lured stragglers over to his set with a throbbing bass and then proceeded to bore with his next three songs. All of this seemed a bit flat, but getting heightened atmosphere when playing to a crowd who’ve been entertaining children since 6am is asking a lot.

Festivals are about unexpected discoveries, saturdays first was ‘The Pictish Trail’. Fronted by hilarious Johnny Lynch. PT was a treat. Alongside a great talent for comedy Johnny had a great voice and imagination. The sound owed something to hot chip with a charming folksy electronic style. The crowd was in hysterics as he showcased his experimental 30 second songs. Each one was bizarrer than the last but actually pretty good. They were the cream of a month long song writing project. Excellent fun, worth seeing as a solo performer.

Later as the ale kicked in and some rain drifted past, we stumbled across Maia, again a charming, chatty group who are self described as producing sci-fi folk. They had real musical talent, produced interesting folky psychedelic sounds and they really warmed up the obelisk tent.

Sunday started with a morning rave, which was a surreal but very enjoyable idea. Lots of classic 90s dance, smoke and kids everywhere hula hooping. We went hard on the calpol until 9.30am Got so into it I took 3 layers off and danced in my bare feet.

On a beautiful sunday morning to give a taste of the entertainment there was a man dressed as a roman chucking balls at an octopus in a lake using a trebuchet. Some wwii plane engines got fired up to blast the kids ears and kids played swingball en masse behind the crafts tents.

Around midday the music started and it was more of a female line-up with Eliza Shaddad, Rozi Plain, Emmy The Great and Ibibio Sound Machine.

The stand out lady was Eno Williams of Ibibio Sound Machine, the joyful afrobeat of her band was matched by her great presence, outfit and African dancing. They started just as the rain began but got everyone moving and on side. Just what was needed. The sunshiney guitars and squeaky synths and bongos inspired some group dance moves in the middle of the field. One of the best vibes of the weekend.

‘Emmy The Great’ was more like Emmy the stoner. Her sound was so chilled, dreamy and horizontally laid back that I fell into myself while feeling thoroughly undistracted from the rain.

The rain had set in and the melancholic folk of ‘The Unthanks’ was at times beautiful but as often a bit depressing.

One thing that stood out on Sunday was seeing a massive cardboard box with two kids inside it being walked across the field in the manner of an upside down rowing boat in a pirate film. The kids enjoyed all the entertainment immensely, the adults enjoyed the guitar bands and the talks and watching kids shows with their children. All in all Deer Shed festival is a great family orientated festival for the north that will doubtless sell out again next year

View all posts by Ben Brown →