Returning for our second consecutive year to Fairport’s Cropredy Convention, Gigslutz joined the founders of folk-rock in celebrating their golden anniversary. Culminating in a 3-hour live showcase (eat your heart out Springsteen) featuring an all-star cast of original and former members. Come all ye roaming minstrels and read on…

Last year we aimed to shine a little light on the variety of billed acts in store and that’s still the case for this year’s festival, see case in point – ‘let’s do the 80s time-warp’ – Cats In Space. However for 2017, we unconsciously decided to make a beeline for the more trad and contemporary folk acts on the line-up.

For the uninitiated into Cropredy’s little patch of Eden, Feast of Fiddles may have appeared a bit of a foreboding sight. A fiddle and melodeon welcome may have been anticipated, but nine fiddles, perhaps not. Crash test dummies colliding against a live wall of sound, which would have sent P. Spector spinning; well what better way to open proceedings?

The Broadway pomp of ‘The March of the Siamese Children’ lurches into the hulking advance of ‘Kashmir’, with Chris Leslie leading the mutant movement. Could it be foreshadowing a return guest appearance from Plant himself later in the weekend? Alas, not this time. However no time for tears, as all is soon forgotten as the audience rocks back and forth, like seafarers swinging from the bow, as FoF rally through the opening a cappella of ‘Smuggler’s Song’ and ‘The Pirates of The Caribbean Theme’. A veritable feast indeed.

We caught up with Peter Knight – of FoF and most notably Steeleye Span – again on Friday, fronting the Gigspanner Big Band. Knight, joined by Phillip Henry & Hannah Martin (of Edgelarks) descend like heavyset fog. A pastoral ambience is cast over the field, with balletic fiddle passages breaking out and arching above the murk. ‘Sharp Goes Walkabout’, imagines folklorist Cecil Sharp witless and lost in the Australian outback after toying with hallucinatory toads. We’ve all been there. It serves as a definite set highlight alongside Henry’s hypnotic dobro playing.

Eleven shows into their sixteen strong festival hitlist, newly appointed doctors of music and leaders of the acoustic roots scene Show of Hands take the stage before the unstoppable hit machine that is The Trevor Horn Band. Originals such as ‘No Secrets’ and ‘Roots’ ring out with the spirit of a hundred workingman-club-choruses, alongside a cover of Don Henley’s ‘The Boys Of Summer’ that takes Cropredy on a quick detour of Palms Springs & Venice Beach.

Second only to Fairport’s choice selections, ‘Best Setlist of the Weekend Award’ goes to Trevor Horn, Steve Lipson & Lol Creme, a trio of producers together responsible for over 200 hit singles. It was truly a sound to behold as they rattled off ‘Video Killed the Radio Star’, Grace Jones’ ‘Slave to the Rhythm’, Seal’s ‘Kiss From A Rose’, 10cc’s ‘Rubber Bullets’ and t.A.T.u’s ‘All The Things She Said’ (yes, seriously). Half way through Russ Ballard, the writer behind ‘Since You Been Gone’ and ‘God Gave Rock & Roll To You’, joins them for belting renditions of both tracks. It’s worth noting the guy’s seventy-one. It’s very 80s. It’s very Bill & Ted. And it’s guilty-pleasure heaven. 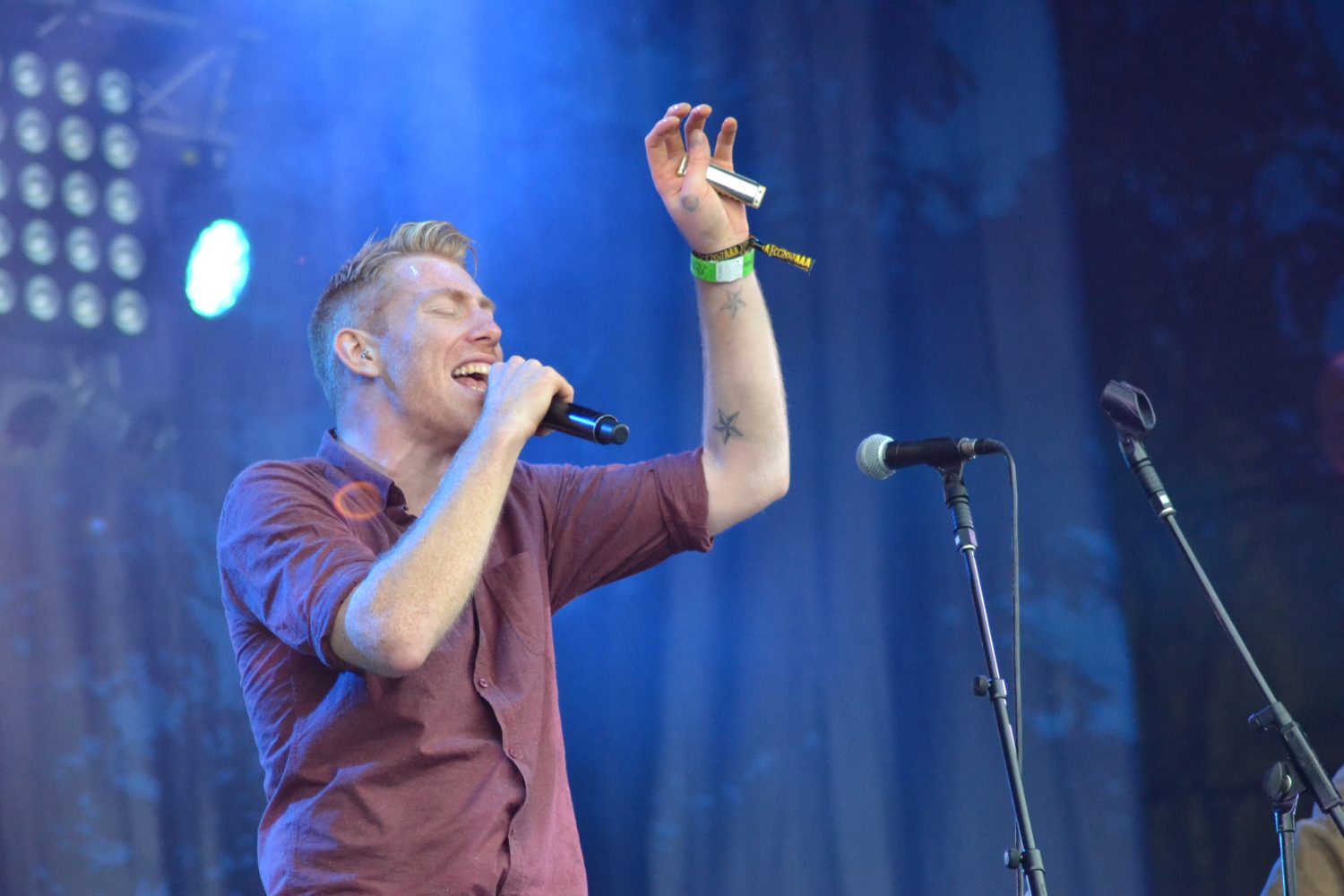 From Reels To Riches

Ambling along Cropredy’s cobbled roads and canal we were on the hunt for some of the undiscovered gems of the festival. We took in some of the sights and sounds of the fringe at The Red Lion & The Brasenose Arms, climbed the belfry, enjoyed Field 8’s pop-up stage and hog-roast, but found yet again the real action was main stage.

One of the most outstanding spots of the weekend comes courtesy of guerilla-buskers CC Smugglers. Their steady transition from street performance to the Cropredy main stage makes perfect sense once this band kicks in. Their feelgood, fine-tuned take on swing, jazz and wider American folk music in general, captures the hearts of many drop-jawed fairporters. Their newest recruit on keys/accordion, Tom Seals, is a talent to be reckoned with contributing effortless flair and finesse to frontman Richie Prynne’s magnetic bravado. 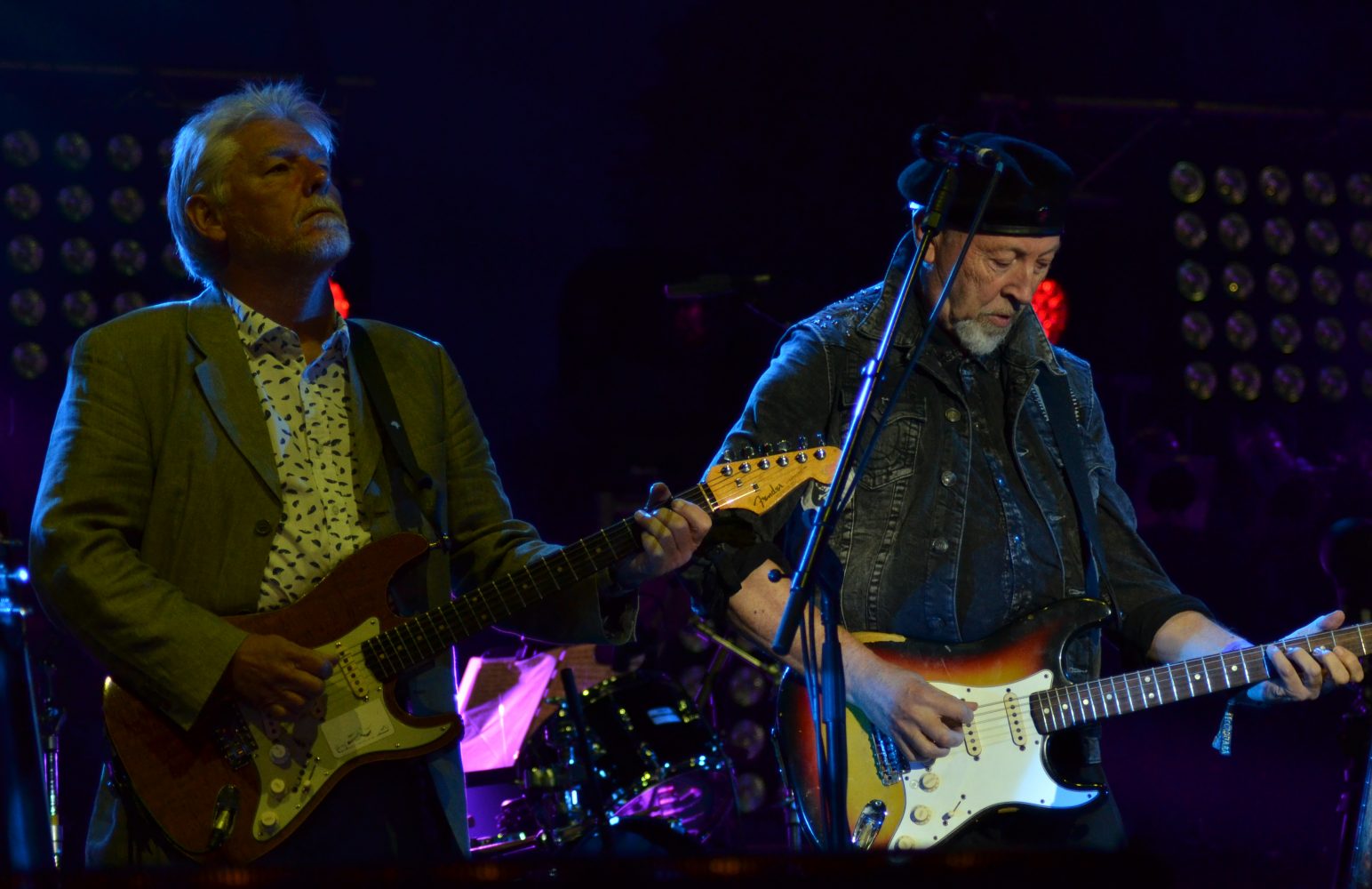 It would seem from the sea of grinning faces this is only surpassed by The Pierce Brothers. When the audience cries out, Cropredy answers. So since Jack & Pat’s early-afternoon reception was such a joyous affair the previous year, Peggy and the team invited the Melbourne duo back for Round 2. Now I’m assured that rarely happens (if ever). Rising to the challenge they rattle off a set of nu-folk material that borrows from the barnstorming spirit of The Lumineers, Mumford & Sons and the John Butler Trio, but manages to exhibit enough eccentricity to break away from this pack. Just witness the didgeridoo action, onstage acrobatics and the fact there’s just the pair of them up there. The crowd’s reaction is stunning even if the music struggles to fully grasp this reviewer’s attention.

Who Knows Where The Time Goes?

It’s difficult to know where to start with Richard Thompson. Back in 95’ new wave’s ‘big brain, in an even bigger suit’, David Byrne quipped:

“Personally, being somewhat jealous and envious of Richard’s songwriting and playing, it is somewhat satisfying that he has not yet achieved household-name status. It serves him right for being so good.”

Thompson has practically redefined every musical field that’s retained his interest long enough. If his importance is sometimes undervalued, well fine, we’ll accept that because after Fridays performance we’re happy to keep him to ourselves. Opening with the grumbling ‘Gethsemane’, we’re struck by the conviction of RT’s steely gaze as fingers flow over the frets of his signature Lowden acoustic. Vocally he sounds more assured than ever, sinking from a snarl into the graceful delivery of ‘Persuasion’, with an ease that recalls the sorely missed John Martyn. Pegg & Mattacks (folk rock’s most notorious rhythm section) and Nicol & Christine Collister soon join Thompson for a fiery full band set. Collister’s tasteful harmonies and Nicol’s shoulder-rubbing guitar work alongside Richard’s unmistakable lead – with a tone that sounds as if he’s being backed up by a Hammond organ – make for an unforgettable set of well-received classics, that include ‘I Want To See The Bright Lights’, ‘Hand of Kindness’ and ‘Tear-Stained Letter’.

As the sun dips beneath the skyline on Saturday we’re charmed once more, however this time it’s by one of Scotland’s finest – Dougie MacLean. The troubadour’s wit and wisdom calm the full-cap crowd that has gathered for the evening’s main event. ‘Talking With My Father’ and ‘Caledonia’ seems to tap the same source as Thompson, displaying expertly crafted melodies that never stray into over sentimental or indulgent reaches. “I believe music is magic” he says, as a quiet aside. It’s an opinion that could set eyes a-rolling and skin crawling but from MacLean, radiating integrity as dewy-eyed onlookers pick-up the refrain of ‘Love Will Carry’ – it’s a mutual feeling.

Before they take the stage we’re stood sharing thoughts on how it is that Fairport Convention have kept it up for so long – pharmaceuticals aside – and to us, the most obvious reasons would be out of the pure love of playing and performing. By Saturday’s headline slot Nicol & Leslie for example have already graced the stage twice, both with different outfits. We’re referring to acts here, not costume changes. Besides Hutchings steals the best-dressed accolade for his tanned tassel jacket/bandana combo.

For their 3-hour live trip back through the annals of musical history we’re treated to a performance by as close to the original line-up as possible, with Judy Dyble, Iain Matthews, Ashley Hutchings, Richard Thompson and Simon Nicol together once more onstage. Touching tributes are made in regards to Sandy Denny, Dave Swarbrick and the late Martin Lamble, with Chris While, Chris Leslie and Dave Mattacks doing them proud in their place. Here stand the figureheads of the folk rock genre, as if they’re “all eighteen again” – “where’s the last fifty years gone?” cheers Nicol. 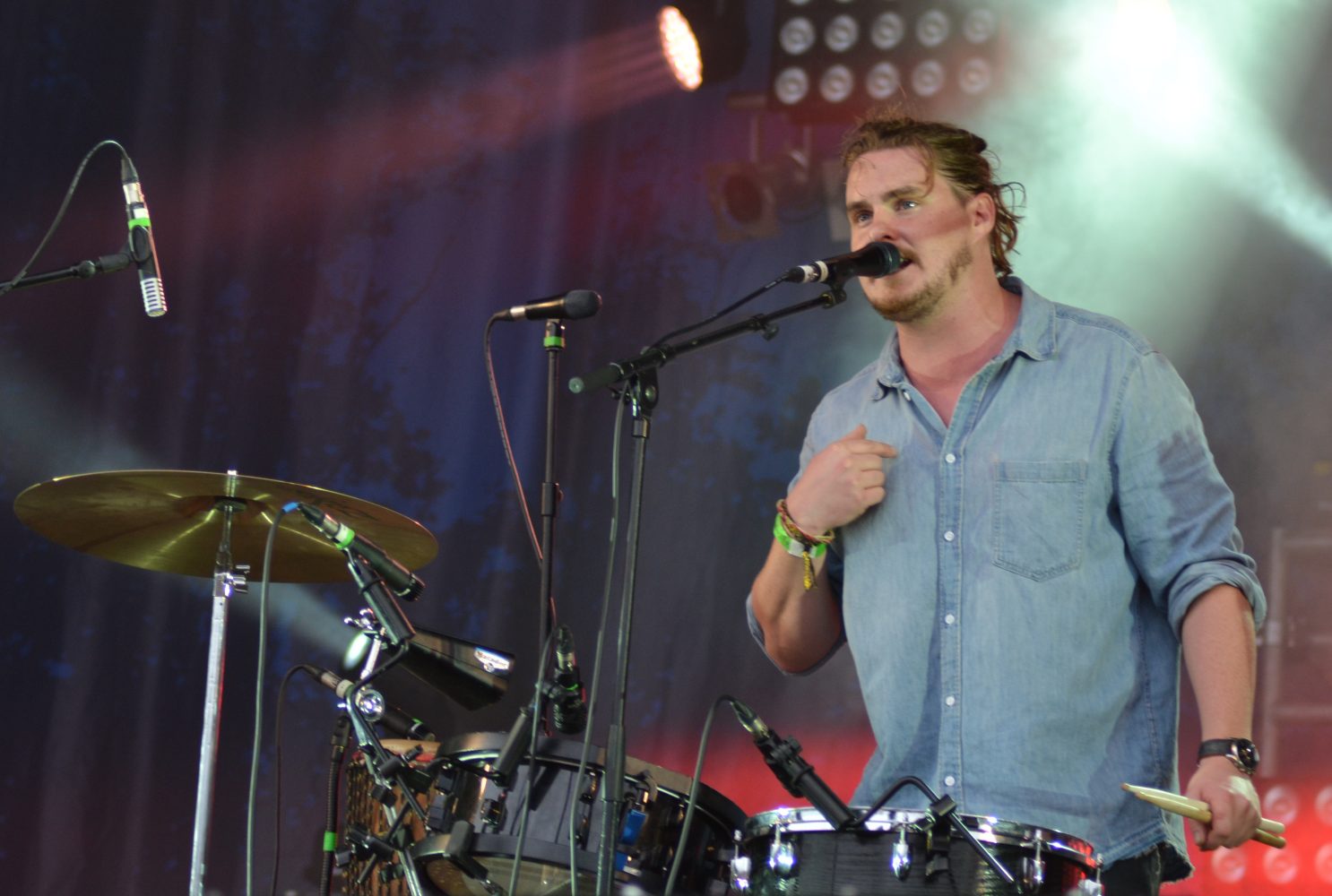 Starting with a focus on their early years where material from American singer/songwriters made up a strong part of their repertoire, Dyble takes lead on Joni Mitchell’s ‘I Don’t Know Where I Stand’, and then knits throughout Matthews’ & RT’s trailblazing cover of Richard Farina’s ‘Reno, Nevada’. It’s an in-joke that harks back to Fairport’s younger days. It all went by quite quickly, but if I had to hazard a guess I’d say it’s some sort of tabard she’s working on.

With a confident air Chris While joins for a lush, reverb-laden taken on Leonard Cohen’s ‘Suzanne’ before ‘rousing the spirit of the earth’ with her delightful lead, that’s reminiscent of Denny herself, on ‘Come All Ye’ and a number of other Sandy fan-favourites. Mattacks’ cowbell signals the freeing flight of ‘The Lark In The Morning: Medley’, before Thompson’s ‘Walk Awhile’ sees the crowd through yet another sing-along. Leslie & Sander’s sympathetic mandolin and fiddle work sings on ‘The Hiring Fair’, with Ric subtly amping up the echo-unit before the rhythmic ‘jiggery-pokery’ of ‘The Hexhamshire Lass’.

A humble Simon Nicol says it’s his privilege to perform what turns out to be a wistful duet on ‘Who Knows Where The Time Goes’ alongside C While, before the expected closing trad anthem ‘Matty Groves’. Just before the arm-in-arm encore of ‘Meet On The Ledge’, with shooting stars passing overhead Sander’s takes the mic: “We may be old… but we’re not planning on stopping anytime soon”. Well to Sanders’ and the rest of Fairport, we wouldn’t have expected anything less. On a closing note, as ol’ Swarb once put it:

Big thanks once again to the Cropredy team/organisers and our ever-expanding Fairport family.