Kicking-on from last Sunday’s AC/DC Rock Or Bust extravaganza at Hampden park, I returned to Glasgow and the Record Factory for a night of sweat soaked live music. With five bands apparently on the bill, followed by a DJ set by The View, this was never gonna be anything but animated – but then again, are This Feeling live nights ever anything else?

Arriving late resulted in only hearing the final few minutes of Echo Moon and it was Falkirk based band Dillinger getting wired for action by the time I made my way towards the stage. Despite some moments of promise and tasty guitar work, Dillinger struggled to ignite the crowd and as our American brothers and sisters celebrated their Independence with fireworks, Dillinger’s set proved a bit of a damp squib, with final song ‘Coming Home’ fizzling out their set. Perhaps it was just the majority of pleasure-seekers hydrating at the bar for the night ahead or the fact most (including myself) appeared to be in attendance to hear the next two bands on the bill. 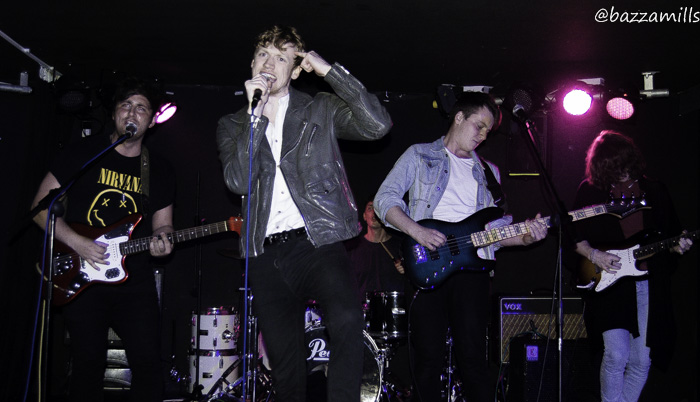 The Mona Lisa‘s follow and waste no time projecting their sound with opening track ‘Messed Up’, and as intriguing front man Kevin Murphy Jnr bellows “we’re The Mona Lisa’s and we don’t fuck about” it was clear the night was about to erupt. Hailing from Ballingry in Fife, The Mona Lisa’s are a band I have been following since the release of the catchy ‘Wasted Time’, and having previously referred to them as “The Strokes on speed”, their distinctive sound is unlike anything else on the Scottish scene.

With the drums pounding, ‘Falling For A Stranger’ followed, with the crowd responding visibly to the opening track from the id/ego/superego E.P released earlier in the year. As a first listen, new track ‘Devil In Disguise’ sounded decent, with the bass and guitar catching my ear. Both ‘Anxiety’ and ‘Soldier’ highlight the strength of The Mona Lisa’s songwriting, with front-man Kevin emptying the locker as he pushes his vocal to the max on ‘Anxiety’. ‘Wasted Time’ brought some buoyancy to the set following the climatic ending of ‘Soldier’, before ‘Lost Control’ brought the 30-minute set to a crashing finale as shouts of approval from the crowd rang out.

Now not many bands would fancy taking the stage following such an explosive set, but Kilwinning lads Common Ground thrive on such energy and pounced onto the stage like caged roosters being released for a cockfight. Since forming in December 2013, Common Ground have been hurtling through the Glasgow live scene quicker than a tornado, and have already headlined King Tut’s as well as supporting artists such as John McCullagh and Northside.

Having caught the band live on a couple of occasions now, I now know what to expect (I think); catchy as fuck guitar-driven indie rock delivered with a raw bite of venom that would make a snake bite seem tame. Similar to The Mona Lisa’s, Common Ground has a front-man who commands the ear and, when delivered live, transfixes those in attendance with his swagger, snarling vocal and blue steel stare. Backed-up by the rest of the band, Common Ground have blossomed in confidence since I first heard them live and have been busy developing their infectious sound. 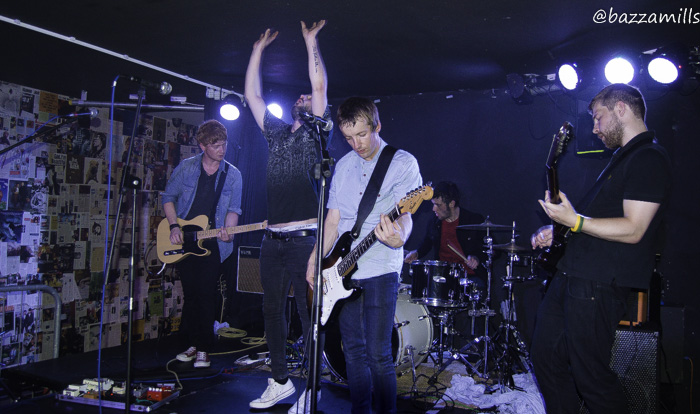 Tonight the set opens with ‘Days’, with both the band and crowd evidently up for it, but unfortunately within a couple of minutes it is clear something is not quite right; at the end of the track there is a delay due to technical difficulties, as the sound-man attempts to remedy the missing bass sound. As the delay continues, The Mona Lisa’s Manager comes to the rescue, albeit some of the crowd shout out “sabotage” repeatedly. Despite the set-back the lads return with a fire in their bellies and by the time the set reaches ‘Come With Me’ the band are on it and taking the crowd with them.

‘Rules Of Life’ (a track from their forthcoming EP) follows with the crowd erupting to a tune laced with guitar hooks that reel the listener in from the opening seconds. Since reviewing the track back in March it has received 2K+ plays on Soundcloud, and been shortlisted by Edith Bowman and, despite the track yet to be officially release,d it is apparent I am not the only one catching-on to the infectious sound of Common Ground. After the technical delays, ‘Rules’ well and truly has the crowd pumped and as chants of “more, more” follow I notice the soundman gesturing to a disgusted looking Wullie that the lads only have time for one more.

A favourite of my own, ‘Mr VIP’ follows – as the band cleverly burst into a further final track called ‘Thing Called Love’ the band do a good job of appeasing a crowd who do not want the set to end. Next up for Common Ground is a Scottish tour support slot opening for Cast, and it would not surprise me in the slightest if both The Mona Lisa’s and Common Ground feature on the 2016 T Break Stage at T In The Park.