It is about 2am and I am sitting under a comfortingly huge tree, eating a pizza, on my own. (It is a really nice pizza, too – as they tend to be when you realise you haven’t eaten for ten hours, stumble up to the counter and ask for the one “with all of it on”.) It occurs to me that even though I am on my tod, in a not entirely compos mentis state, in a field full of strangers, I don’t feel the low level panicky paranoia, or the desperate need to teleport back to my tent, that can strike in the small hours at a festival when plans go awry and meeting points are missed and companions have turned in early. I put this down in large part to the fact that I’ve managed to get deep into the Saturday night at the Green Man without yet encountering a single person I wouldn’t happily have a pint with.

Of course, this amiable and satisfied bunch would not have been here, let alone so amiable and satisfied, if it weren’t for the music. The real stroke of luck (or skill) is that all of the main acts – The War On Drugs, Mac Demarco, First Aid Kit, Caribou, East India Youth, Neutral Milk Hotel and Slint, to name a few – are sufficiently well-known and revered to inspire giggling excitement in the discerning indie muso but not household namey enough to lure the antagonistically pissed-up douchebag contingent all the way to Mid Wales. Well, that, and the decision to hold it on the same weekend as V. 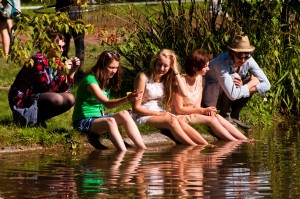 Another major factor feeding the sense of calm and wellbeing at Green Man is undoubtedly the setting. Nestled in a dramatic dip in the Brecon Beacons, polka dotted with fat oak trees and wise old chestnuts, it had me at hello. After pitching the tent on Friday afternoon and drinking in the view, along with that all-important celebratory arrival can of Scrumpy, we headed down to find the main arena with a spring in our step and a grin. A very short stroll later it got even better, when we turned a corner to find ourselves in the middle of a natural amphitheatre giving on to the Mountain Stage and its simply awe-inspiring backdrop of sun-dappled peaks with perfect, fluffy, Simpsons-style clouds scudding by. And it didn’t stop there; further aimless wandering revealed a shady pond, a mini waterfall and a path through a garden bursting with flowers.

Not only is the site easy on the eye, but the intuitive layout takes a load off the brain and the legs. Though each area has a distinct feel, it is only a few minutes’ walk between them, making it possible to catch many different acts without too much stress – something not all festivals manage, by any means. We got warmed up with a trip to the Green Man Rising stage, nestled in a cute and easily accessible spot off the main arena (proof of the genuine focus that the festival puts on showing off new talent) where Charles Howl‘s skronkin’, cosmic take on stripped back punk rock gave a taste of the quality to be found there. A bit of an explore and a few drinks later, and suddenly it was dark; Mac Demarco was the first predicted festival highlight to come good, lighting up the Far Out tent with his singalong chorus guitar and charismatic croon across a mix of new and old material. Staying in the same spot, Caribou switched it up and elated the crowd with a euphoric headline set of glimmering electronica. A wander across the hillside yielded the party sounds of Chai Wallahs and the bizarre Denture Disco tent, before meandering to bed via a relaxing loll by the pond.

Saturday, again, got going with some new discoveries at the Rising area, with Eva Bowan‘s experimental electronic soundscapes and Memory Clinic‘s snakey-basslined indie making for a diverse musical brunch. Later, energy levels on the wane, a trip to the Last Laugh comedy tent brought Nick Helm‘s raspily shouted punchlines which hit the spot despite the fact we were sitting outside the rammed enclosure behind an almost soundproof wall of people; graduating to seats inside, we were then treated to one of the best slices of character comedy out there today, in the shape of erstwhile German ski champ Flange Krammer, with his perfectly crafted persona and catchphrases of “Eat ze powder!” and “High fünf!” tickling the audience. Synapses firing once more, next on the menu was The War On Drugs, whose low-slung yet rousing, Dylan-meets-Springsteen, slow burning and high soaring bag of magic mesmerised the Mountain Stage masses, climaxing with ‘Red Eyes’ as I danced on my own, doo-doo-doo-ing along to the guitar riff while my brother reclined on the ground, showing signs of the impending exit which would later leave me alone but unperturbed under a tree with a pizza. It was headliners Slint at Far Out that eventually did for him, their compelling set claiming rapt attention through the twin forces of musical dexterity and sheer volume, rivalling Nick Cave at Glastonbury last year for the coveted ‘loudest thing I’ve ever seen’ award. Skip past the solo pizza, and a mosey over to Chai Wallahs yielded some acquaintances with whom the night was spent dancing, and roaming, around and about. Even at night the rolling Teletubby hills and mighty trees made for a lovely playground.

If ever there was a band designed to rouse the mind and soul into the land of the living, after five hours’ sleep in a field, then 9Bach on the Mountain Stage at noon on Sunday was it. The North Wales outfit’s mix of Welsh language folk songs and dubby electronic elements rang through the valley, the stories illuminated by frontwoman Lisa Jen’s sparky and sincere bilingual patter. Despite beginning to feel the mental and physical strain, a vintage day of entertainment was taking shape. After enjoying my favourite festival lunch of Goan Fish Curry, an attempt to catch Gruff Rhys‘s interview about the life of John Evans – who inspired ‘American Interior’ – was thwarted by an inability to hear the softly spoken Super Furry Animal from outside the packed tent. However, we took this as an opportunity to recharge with coffee and rather a lot of cake from the nearby tea bus, and what I did manage to grasp of the talk was fascinating enough to make me keen to watch the film, buy the book, and so on. With time to fill before Anna Calvi struck up on the main stage, the breeze floated an intriguing musical snippet in our direction, and we decided to find the source: a four-piece set up in a seemingly random spot in the Far Out field, the sun beaming through their hair, and the most magnificent melee of prog/jazz/math rock pelting gleefully out of their guitar, bass, sax and drums. The Evil Usses, they were called, and we vowed to remember that name as we stood up, dazed, and walked away through the crowd that had gathered behind us. The inspirational Calvi killed it on guitar as always, while flooding the wondrous bowl of the arena with a tidal wave of vocal power like some sort of badass rock opera. Bill Callahan‘s taut driving rhythms and wry vocals, shot through with wailing and scuzzing guitars, caught our attention next, moving him up a fair few categories in my brain from vaguely known name to firm fixture on my record shopping list (which is, incidentally, as long as my arm, with all the great new artists discovered this weekend).

Tired through and through, going to see sketch trio Pappy’s (in what must be noted is an exceptionally strong comedy tent offering overall) proved a strategic win as they restored our faculties with a barrage of unhinged wit, and had us laughing our way back into a buzzing state for the closing musical headliners. Neutral Milk Hotel turned out to be as great a choice as expected to close out the main stage, proving they haven’t lost the raucous energy or raw sincerity that made their shows the stuff of legend first time around, their makeshift orchestra of hyperactive multi-instrumentalists fuelling the most elated crowd of the festival. Thanks to the staggered stage times we were also able to swing by Kurt Vile and the Violators, whose live show beefed up the noir-ish rock ‘n’ roll sound of the records satisfyingly, before attaching ourselves to the hordes heading up the hill for the burning of the Green Man. 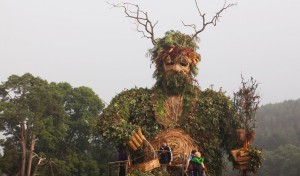 As sparks plumed out into the dark from the placid giant who had watched over us all weekend, the freaky extravaganza brought closure and a moment to reflect on a perfect pagan party that had been, to steal the onstage words of Neutral Milk Hotel frontman Jeff Magnum, “very humane, and very real”.