Jack Rocks, in collaboration with rock n roll club night This Feeling, graced the Isle of Wight Festival for their 3rd consecutive year. Compiling an impressive bill of the best new bands from all corners of the UK, the atmosphere in the tent was incomparable and truly unrivalled all weekend. With 49 amazing bands showcased, it would be near impossible to cover each and every one with the enthusiasm they deserve. But, we’ll at least give it a go…

Opening Thursday’s show as well as the whole festival was South London quintet Naropa, who’s gritty and full-of-attitude set was the perfect introduction to what could be expected from the rest of the line-up, and sets the bar high for other bands from the get go. Later in the evening were Plastic People, also hailing from the capital. Despite forming fairly recently, guitarist Dave Bardon and frontman Sam Silue’s combination of bluesy rock and 60s psych is surprisingly tight and very slick. Blackwaters storm the stage in their usual riotous bravado which amps up the energy in the tent and sees our first crowd invasion of the weekend – front man Max Tanner bares a stage presence that draws parallels to that of Jack Rocks graduates, Cabbage. Brighton favourites Yonaka close the evening with their cool blend of alt rock and dark pop. Frontwoman Theresa Jarvis’ vocals and moves are captivating and when coupled with the bands heavy riffs, were the perfect first-night closer, and left us in a huge anticipation for what the remainder of the weekend may hold.

Friday openers Of Empires make their Isle of Wight debut in absolute style. Jack Fletcher’s soulful, snarling vocals and charming stage presence is enough to make any hangover subside. No Hot Ashes bring their Stockport swagger to the tent, whilst Leicester’s Arcades give us a lesson in how to completely own a stage. Red Faces quickly fill the tent with their infectious indie rock, including fan favourites Kerosine and Wise Up, two tracks which have the potential to be huge. Broken Witt Rebels once again prove why they are fast gaining a loyal fan base of indie dwellers and music lovers in general. Danny Core possesses one of the most captivating and powerful vocals of anyone on the line up, both Jack Rocks and the main festival as a whole – it’s no wonder they drew perhaps the biggest crowd of the weekend. Next up is East London’s False Heads, who’s self-described ‘crack rock punk’ sound provides one of the most energetic and exciting performances of the weekend. Concluding with a good old-fashioned guitar smash up, (let’s bring this back) the trio prove why the likes of rock n roll legend Iggy Pop is a fan, and why you should be too. 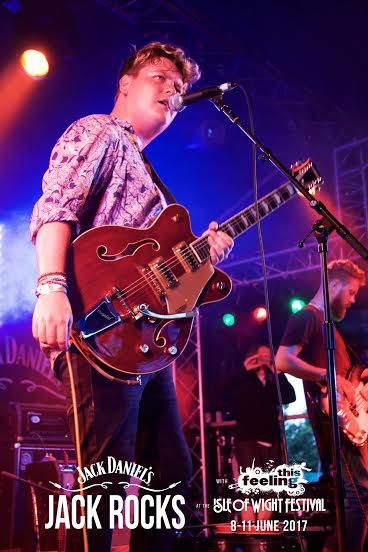 Jack Rocks favourites Trampolene close the show in true rockstar form. Frontman Jack Jones (who seems to have learnt a thing or two about recklessness from his recent touring stint with Pete Doherty) sings with passion whilst baring their signature Welsh flag on his mic stand, before abandoning his band mates on the stage for new heights, aka, the central pole keeping the tent up. Somehow managing to climb up and continue banging out guitar riffs like he does this on the daily, the audience is enthralled if not slightly concerned about his impending descent. However, in true rock and roll form, Jones jumps from said pole to the stage over the crowd, gracefully landing on two feet completely unscathed, which was met with a huge roar from excitable onlookers. The next day the pole is covered up, but at least someone got to do it… 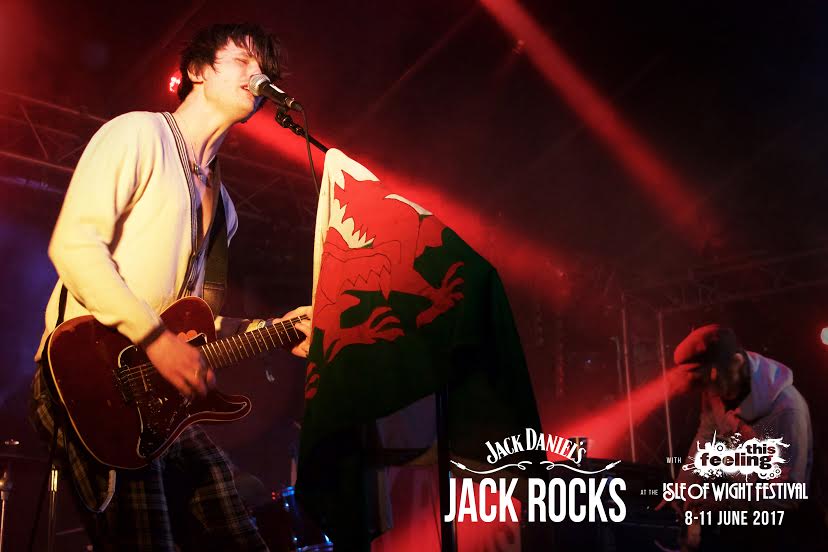 Saturday and Sunday prevailed and if you hadn’t lost your shoes (Dantevilles), found yourself at a party a half hour journey from the festival site (Paves), or stayed purely to groove to the glorious tunes of Nineties Mike’s DJ set, then you were more than ready to grab the next two days by the horns, so that makes… none of us?

Sleep deprivation and hangovers aside the line up at Jack Rocks just kept getting better. Emily Capell gave a vocal performance that shook up the later risers – if her songs didn’t do it then it was her vibrant stage presence and infectious wit – think Lily Allen meets The Libertines at a drive-by . Dantevilles followed with a set that credits their hard work and reflects their spirted personalities behind the scenes, with half the production team joining them on stage for a closing jitterbug – Graffiti is definitely one of my tunes of the weekend. 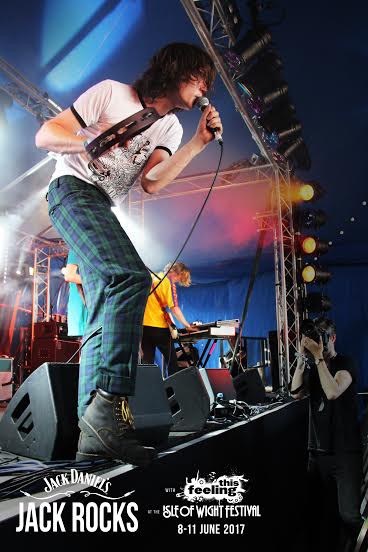 Saturday was kicked off by The Surrenders, who soon got every one back in the zone and dancing. My god, this band, they can play, they’ve got groove and the vocals! Wow. The Jack Rocks 7 were out in force with The Blinders kicking ass as per post-election, lead singer Thomas Haywood acquiring an Indian headdress that was seen on many a sweaty brow by the end of the day. White Room delivered a set that bridged fluidity and an excellently rehearsed tightness, I think festival vibes help encompass their overall musical message, latest track Take Me Away is worth a listen. The Wholls, never in the country for long since their recent success in Germany, played with grit and an enchanting finesse, they’ve grafted and it shows. Continuing the stellar line up The Shimmer Band drew in the entire crowd with classics such as Freedom for us loyal followers to jam to (a lot of stomping and arm waving was involved) and threw in newer track Sunkick to boot, their lyrics are begging to be screamed back at them. The Wytches topped what turned out to only be the beginning of an incredible night, a rowdy tent representing the current prominent voice of young people chanting ‘Oh Jeremy Corbyn’ mid tune. 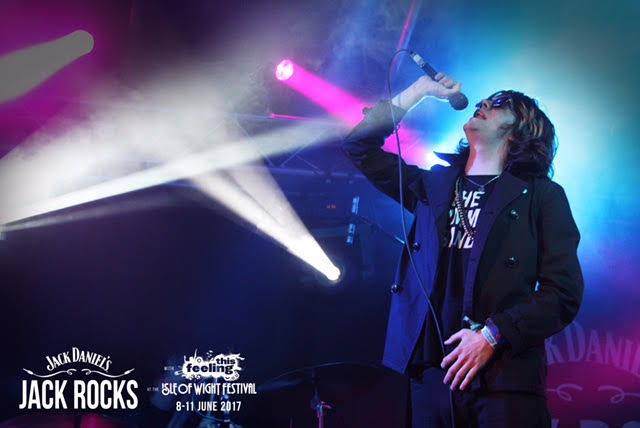 The weekend also saw the welcome graduation of many a friendly This Feeling face onto the Big Top Stage. Judas and Bang Bang Romeo (the later who also smashed the Jack Rocks stage on the Sunday) played to a hefty crowd and recent chart toppers The Amazons made the grand leap following their success since appearing on last year’s Jack Rocks line up .

Paves, who were bombing about backstage the entire weekend showing their support for fellow bands, finally took to the stage on Sunday afternoon. The mysteries of Harambe all in the past, a tent of fans and friends joined in for the latest single Baby before lead guitarist Mike Whitaker rather dodgily scaled the stage rig (to great effect may I add). The Assist not only played a great set of their own but dragged out half the backstage crew courtesy of a gigantic conga line into the audience for This Feeling regulars Liberty Ship who had the tent bopping to their sunny indie tunes. The Sundowners altered the vibe for a sense overload, this lot are so damn cool, gracing the stage with their Liverpudlian folk rock. Finally Superfood topped the bill beautifully, satisfying the true indie fan and his dog and drew the weekend to its final close.

And with that the zone was over, or is it ever really over? This Feeling operates enough band nights up and down the UK to get your zone fix for life, not to mention the many festivals yet to be tackled by Mikey Jonns and his loyal team this summer alone. Catch em’ on an intimate stage whilst you can because before you know it this lot will be scaling the festival headliner heights just like the best of them. 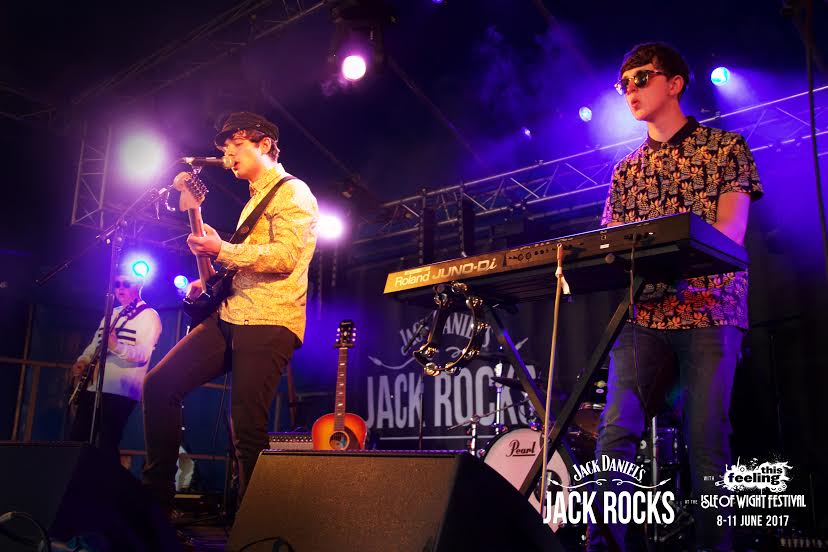 This Feeling Track of the Day : John Hassall & The April Rainers ‘Whether Girl’

Glastonbury: The Clashes, The Secrets, The Songs