Originally a club night set up by Groove Armada, Lovebox has become a staple of the Great British festival calendar, transforming London’s Victoria Park into a bohemian dance music dream. Over the years the focus has shifted, with Roxy Music, Duran Duran and Blondie all making appearances, but this year Lovebox returns to its roots. This weekend is about dancehall, electronic, dubstep, r’n’b, jungle and other dance-influenced genres.

Miike Snow’s expertise in production offer an afternoon of finely crafted indie-pop with synths. With all three members having offered a helping hand to the A-list of pop music (Britney Spears, Madonna, Mark Ronson), their band allows them to polish the edgier work up and present it with wall-of-sound style production, in a similar style to Passion Pit or M83. As the sun scorches, the finished product shines out from the stage, with a focus on tracks from their debut as well as this years iii. 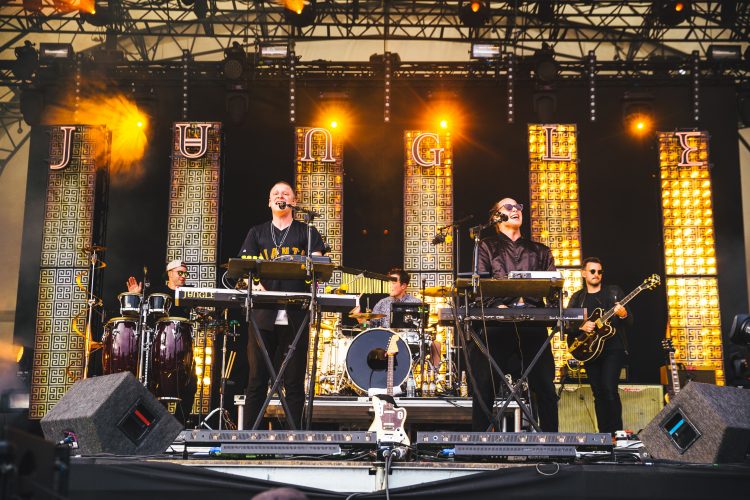 Jungle – who’ve been absent from the majority of festivals this year, hopefully due to work on the follow up to their self-titled debut – follow, offering no hint of anything new. Instead it’s business as usual, with falsetto vocals and on-point percussion overlaying urban beats with brassy breaks. Their songs are stories of life in London, complete with sirens, but they take a moment in the middle to recognise what’s happening around the world with a simple but meaningful message: “Love starts in the smallest places and it grows.”

Having made the music news for the wrong reasons over the last few weeks (due to ridiculously small crowd at their T In The Park appearance) tonight looks set to rectify that. Less than a year since their comeback, LCD Soundsystem have nothing to prove, but it’s a huge crowd who’ve come to hear the cult dance anthems, and frontman James Murphy is quite clearly overwhelmed: “Thank you, guys… Very much,” he declares early on, and the gratitude continues throughout the set. 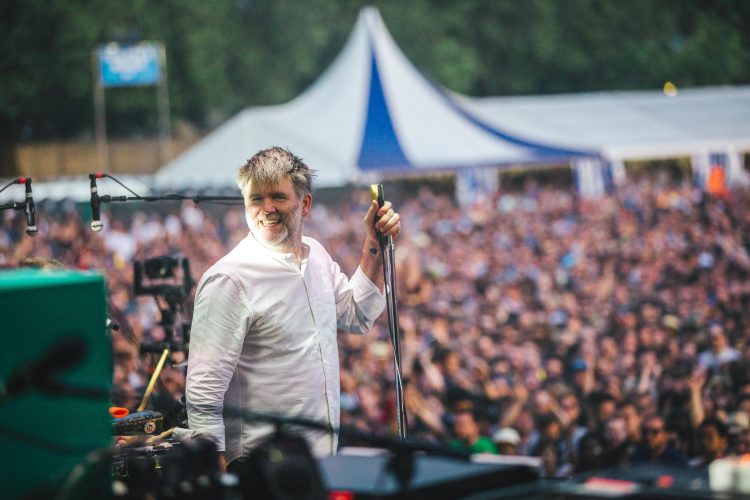 As a slightly larger, slightly older gentlemen performing huge dance numbers, the comparisons between Murphy and Bernard Sumner aren’t unobvious, but somehow he does it looking (slightly) less like a dad at a disco than the New Order frontman. In fact, from behind his standing mic, fingers in ears and shouting out the lyrics, it’s sometimes like Hollywood fruit loop Gary Busey has hopped on stage. But it works, and no matter which band members he has joining him or how long the break is, the LCD Soundsystem back catalogue is timeless.

With hints of Neu!, punk and a smattering of The Beach Boys’ harmonies, ‘Losing My Edge’ sees the crowd doing just that, while ‘Someone Great’ is sung to every person standing there, and sung back in equal measure. ‘Dance Yrself Clean’ and ‘All My Friends’ close the set – the former displaying the calm, measured beats but off-kilter lyrics Murphy can offer, and the latter the erratic melodies but anthemic, rock sing-alongs. Despite only playing 14 tracks, each one was an individual celebration for LCD Soundsystem’s return, and with a new album due this year – and Murphy spending his time away from the band working with Bowie and Arcade Fire amounts others – the celebrations looks set to continue.

This Feeling Track of The Day : SURGE ‘Lemonade’

Discovery Of The Week: The Van T’s