A band with a story behind them almost as heart-warming as the gentle folk-rock they create, Little Mountain are a true joy to see live. Having met whilst recording the Dive Deep Morcheeba album, Ross Godfrey and Amanda Zamolo originally started writing songs together out in sunny California. Coming to London to pursue both a band, and a family, together, the pair happened upon the perfect male lead for the Little Mountain project. Godfrey and Zamolo fell for Ste Forshaw’s distinctive voice and guitar playing when they came across him busking; Ross interrupted the police who were moving him on, and immediately proposed a jam. The rest is history.

Following the dulcet tones and skilled slide-guitar of Bradley Burgess, and indie-rockers The President Lincoln, Little Mountain open with ‘Even More’ – perhaps my favourite song of the night. As Forshaw’s subtly powerful, deeply emotive, husky vocals flow alongside the delicate harmonies of Zamolo, I’m immediately cast under Little Mountain’s spell. A truly heart-rending start to the set that leaves me utterly captivated. 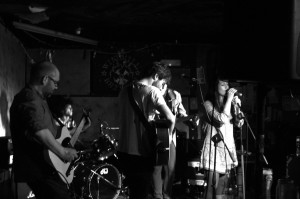 I find it hard to believe that this is the band’s “first gig with a rhythm section”, as each member of Little Mountain seems to fit perfectly. With their skilled musicianship and endearing onstage chemistry, this collective create wonderful slices of folk-rock capable of charming even the most cynical of listeners.

From songs about “falling in love with aliens’ to sunbathing, Little Mountain ooze hypnotic, dreamy vibes that could easily transport you to the California sunshine where the band first formed. As Forshaw and Zamolo swap between leading songs and flawlessly harmonising, their contrasting vocals fit perfectly with one another, as they flow seamlessly alongside Godfrey’s intricate steel-string riffs. Fusing together traditional folk influences (“Any fans of Pentangle out there?!”) with chilled out, effervescent melodies, the result is something quite enchanting. It may not be “raucous’, but it’s incredibly emotionally powerful.

As Little Mountain close the set without their newly added rhythm section, ‘Almighty Love’ brings the night to an exquisite end. Utterly beautiful in its simplicity, Little Mountain have clearly mastered the art of creating uplifting songs that will leave you both moved to tears, yet filled with a reassuring sense of hope. 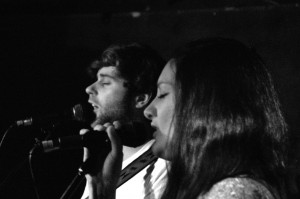 Little Mountain’s eponymous album is out now, and it’s pretty lovely, but you really should catch this band live to capture their true magic: