Beyond the rage, over on the other side of the cathartic ritual of released pent-up frustration and anger, there exists something else that unites the two men on stage and the Electric Ballroom crowd. It’s that rare thing you get to experience and share maybe once in a lifetime (if you’re lucky) between artist and audience: devotion. It’s a two-way thing, of course, between the band and ‘their people’. The Pistols had it. The Roses did too. A vitality borne from intuition and integrity. A respect for the fans; brother and sisterhood writ large on record and at gigs. They’re looking out for us. They represent us. Their names are Jason Williamson and Andrew Fearn. They are Sleaford Mods.

Tonight they open with ‘Bunch Of Cunts’, a vitriolic outburst that references absurdity in the present – Dr Dre’s ridiculously overpriced Beats headphones – and absurd humour from a bygone age, with a refrain of Tommy Cooper’s trademark catchphrase: “Just like that”. It’s a bold move to begin with one of their more obscure songs, and one that only a band adverse to playing things safe can pull off. They soon roll off the more familiar tunes, and a barrage of ‘Middle Men’, ‘Jolly Fucker’, ‘A Little Ditty’, ‘McFlurry’, ‘Jobseeker’ and ‘Tied Up in Nottz’ sees the mosh pit at the front of the stage grow in numbers and intensity. (The sound of the hardcore shouting out the “19.4 – top…” intro to ‘Jobseeker’ – a reference to the thermometers stuck into pallets of cold chicken to check they meet food standards regulations – is arguably the most punk moment this evening.)

Before ‘£5.60’ Jason gives the journos in the crowd their headline quote: “That cunt from Kasabian keeps saying rock ‘n’ roll is dead, it’s fucking dead. He keeps saying ‘where’s all the rock ‘n’ roll gone?’. It’s not dead, it’s gone green and disappeared up my Jap’s eye. Fuck off.” You wouldn’t want to get into a slanging match with this man, who has a power with words to rival Johnny Rotten, Mark E Smith, Shane MacGowan and any other rebellious poet singer. But here in 2015, two people are writing the soundtrack to these bleak times. Their names are Jason Williamson and Andrew Fearn. They are Sleaford Mods. 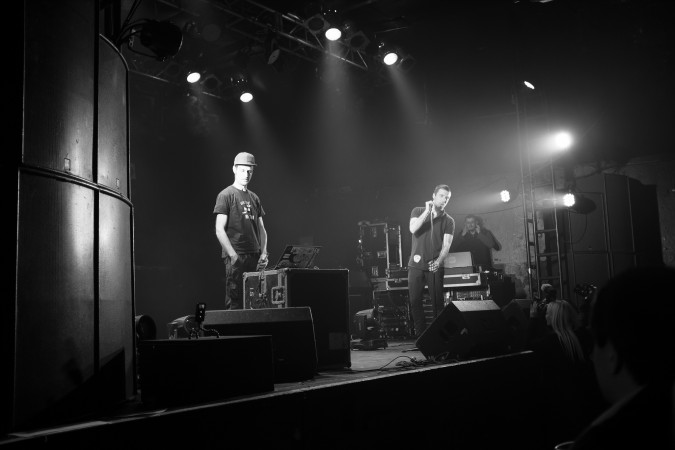 ALBUM: Andrew Combs ‘All These Dreams’