Liam has given the Gallagher seal of approval to American rapper Mac Miller.

Beady Eye are in Australia playing their Big Day Out festival with The Hives and Arcade Fire, replacing Blur, who pulled out of the festival back in November.

Speaking in an interview with Australian newspaper Age, the rest of Beady Eye said they were looking forward to seeing Mac Miller (aka Malcolm McCormick) perform at the festival, as well as hoping to see The Hives and Arcade Fire.

According to 22 year old Mac Miller’s Twitter, Liam Gallagher described him as a ‘mental cunt’, much to Miller’s delight. 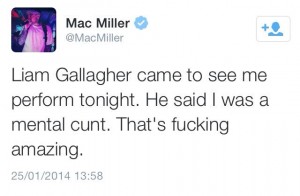 Also given an unlikely compliment was Snoop Dogg, who Liam has described as ‘biblical’. We think that means good?

Do you think Liam’s new appreciation of hip-hop will be reflected on Beady Eye’s next album? Tweet us @gigslutz_ to let us know what you think.