The question of whether The Stone Roses would release any new material has been the burning issue for most of their fans since they announced their resurrection in October 2011. Their subsequent reunion tour exceeded all expectations however true to form everything has been very quiet since.

But now Gigslutz have heard straight from Mani’s mouth that they are indeed working on new material and working towards an album release in 2015.

The band’s bass player and all round top lad, Mani was out in the Northern Quarter in Manchester on Monday at the Tim Burgess gig at Band On The Wall. Gigslutz’ Amelia Ward managed to grab a few words with the  man himself. When posed with the question regarding new material Mani said “Yeah we’ve been working on a few bits” and when asked about a new album release he stated, “2015 man, 2015!”

Gigslutz has previously brought you exclusive Roses news on their support acts for Finsbury Park and also the first details of the Made Of Stone premier. We all have our fingers and toes crossed this one comes off too.

A spokesman for The Stone Roses declined to comment when Gigslutz contacted them. 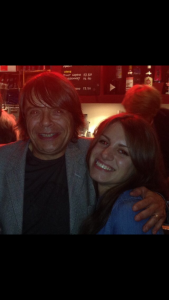