The lights in the Brighton Centre go down. ‘A New Career in a New Town’ from Bowie’s Low plays over the PA system, the soundtrack to the short film that precedes the Manics’ stage entrance. It’s a fitting introduction for a band that has reinvented both their music and identity on several occasions over the past 25 years. From the glam-rock of their debut Generation Terrorists, to post-punk masterpiece The Holy Bible and post-Richey stadium rock success in the late nineties and beyond, the Manics have evolved from neurotic outsiders into awkward national treasures – without compromising either their ideology or belief in rock ‘n’ roll as an instrument for social change. 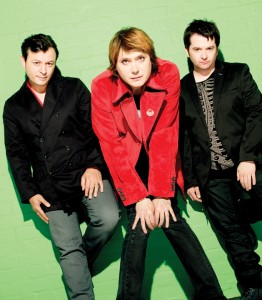 It’s almost 17 years to the day since I last saw the Manics (by coincidence in this very same venue). Back then, there was a gap at the front of the stage to the right of James Dean Bradfield. Richey Edwards had vanished two years previously, and although the band enjoyed their greatest success in the aftermath of his disappearance, his absence deprived the band of far more than an empty space onstage. Richey combined the intellect of a university professor with the soul of a decadent French poet; he was the band’s talisman, its spokesperson, the one who the die-hard fans obsessed about. Tonight, he’s referenced on a giant screen in old video clips, and also by bassist Nicky Wire, who dedicates ‘Die In The Summertime’ to his former band mate: “I can still smell his hairspray. I can still see him carrying his portable typewriter. This one’s for you Richey.” It’s a poignant moment, and one which resonates strongly with those in the audience who fell in love with the Manics before Everything Must Go made them a band that mums and dads hum along to.

They open with ‘A Design for Life’, which sounds rather muted and seems out of place given its usual place towards the end of the set list. However, by the third song – a resplendent ‘La Tristesse Durera’ – they hit their stride; the sight of a middle-aged couple dancing ecstatically to a song with a title inspired by Van Gogh’s last words demonstrates how subversive the Manics are. ‘Europa Geht Durch Mich’, a song from forthcoming album Futurology, sounds immense: a 4/4 Krautrock stomper with a bass line reminiscent of Feist’s ‘My Moon My Man’. (Less memorable is the title track from their new record, which on first listen sounds like a B-side by American rockers Journey.) They take things down a notch on ‘Rewind the Film’, with James doing a fine job of crooning the lines sung on record by Richard Hawley. The frontman also reveals a gift for self-depreciating wit, when during a preamble to ‘Enola Alone’ he apologises for sullying the band’s reputation in the late nineties by wearing a Fila tracksuit top onstage. Fashion faux pas are forgotten during his solo acoustic set, as a beautiful ‘This is Yesterday’ segues into an impassioned ‘From Despair to Where’, before ‘This Sullen Welsh Heart’ reveals a sombre maturity that stays on the acceptable side of sentimental.

‘Archives of Pain’, ‘You Love Us’ and ‘Tsunami’ get the crowd going again, before a spirited ‘Motown Junk’ shows the band still have as much energy and passion as they did at the beginning of their career. They close the set with ‘If You Tolerate This Your Children Will Be Next’, a song which unites the old guard wearing leopard print and blue mascara and those in the audience who first heard the band when this song was at number one in the singles chart. And therein lies the beauty of the Manics: that special ability to write intelligent pop music that speaks to and for both the outsider and the masses without compromising their own beliefs.

Slow Club and The Rifles confirmed for Tramlines