The former Supergrass man returns, with a mature record that proves that although he's no longer young, he's still alright...
Rating:

The sideburns are still there, the wolfish grin, the voice pitched somewhere between a soulful wail, a Weller-esque growl and the agitated pop of Iggy. But there’s something a bit more tailored about Gaz Coombes this time around. Matador follows 2012’s Here Come The Bombs album. This is life after Supergrass lived well. From his lapels to the neatness of each three-minute song, he’s discovered a folky, sonic crispness with a layer ’60s Spector-ish sound to wrap his voice in a familiar, warm coat.

Like the LP’s title, Gaz Coombes is poised, straight of back, baiting the bullish, heard-it-all-before audience. The 11 tracks of this stance-finding album deal in melody. Coombes knows that the minute you ditch the songwriting in favour of souped-up production is the moment your bag of tricks as a creative artist becomes empty. And then the game is up. 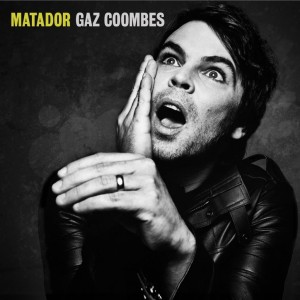 But he’s back at the songwriting craft with songs like ’20-20′, ‘The Girl Who Fell To Earth’, ‘Seven Walls’ and ‘To The Wire’, which sees Coombes sing classic melodies without having to worry about what teenage girls think. That said, opening track ‘Buffalo’ has a tinny Freddie Mercury ring to it, its message lost in an anthemic, pouting studio mini-opus that reduces a song that would have sounded better stripped down and made elemental, more acoustic.

Yet Matador reveals a songwriter finding his reach. At the age of 39, Coombes is no longer the ingénue wolverine with the melodic punk ethic. The album’s not without its soul and it’s all Coombes’, a maturer, more introspective music maker who has nothing to prove and something more of his inner self to expose. The sound is pure English, the production values referencing the sensibility of George Martin but without the need to reference the Fab Four as do too many English songwriters when striking out on their own. Age becomes him. As do the sideburns. Cometh the second album, cometh the man.

Ones To Watch: Asylums