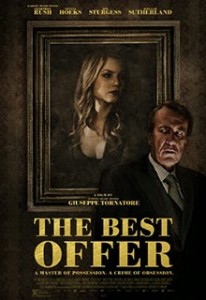 The Best Offer: From Giuseppe Tornatore, the director of “Malena”, comes an art caper starring Geoffrey Rush (“The Book Thief”), Jim Sturgess (“Cloud Atlas”), Donald Sutherland (“The Hunger Games: Catching Game”) and newcomer Sylvia Hoeks. Rush plays the eccentric director of an art auction house, who finds himself embroiled in mystery and romantic intrigue, after a reclusive woman contacts him, wanting to sell her exhaustive collection of family heirlooms. Tornatore is a master at multi-layer storytelling and the stellar Rush; is the perfect anchor for Tornatore’s heartfelt style of filmmaking.
Release Date: January 1, 2014

Open Grave: When a man (Sharlto Copley, “Elysium”) wakes up in a pit, suffering from amnesia and at the center of a visual horror, he runs off, only to discover a group of fellow amnesiacs, who hold him at gunpoint, demanding answers for the atrocity. Films surrounding memory loss are nothing new, the underrated Greg Kinnear, Jim Caviezel starrer “Unknown” cleverly delved into similar territory. The promising aspect of this particular movie is the casting of Copley. He’s an underappreciated talent whose breakthrough performance in “District 9” proved to be anything but a one hit wonder, when he wowed as the villain in last summer’s “Elysium”. Seeing what he can do with this script is going to be interesting.
Release Date: January 3, 2014 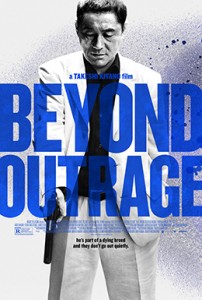 Beyond Outrage: This Japanese film is the sequel to 2010’s “Outrage” and actor/director Takeshi Kitano returns as both the film’s star and director. The story picks after the police have began an expansive takedown on mob activity which, results in an all out war between the yakuza. Mob dramas can be hit and miss, as a crime thriller it is poised for the most intrigue. For Western audiences a glimpse into the world of the yakuza is an exotic leap that lends itself to heady exploration.
Release Date: January 3, 2014

Her: Spike Jonze’s critical darling goes wide, after its limited release at the end of last year, to assure its bid for the awards season. Joaquin Phoenix’s (“The Master”) performance has been garnering raves, ever since the film’s premiere. As has the performance of vocal co-star Scarlett Johansson (“Don Jon”), her Oscar hopes are still possible despite hitting a setback when the Golden Globes ruled she was ineligible due to not being on-screen. As for the plot, Phoenix plays Theodore, a lonely man who finds solace for his lonely heart by romancing an A.I. system. Interestingly, comparisons to the underrated “Simone” starring Al Pacino haven’t been very pronounced. The similar storylines on surface level; sound mildly similar.

Lone Survivor: The harrowing true story of Marcus Luttrell is told by director Peter Berg, who reportedly went to extreme lengths to keep the accuracy of the film, as true to the events as possible. Mark Wahlberg portrays Luttrell, who was one part of a four member, SEAL Team that went on the 2005 mission “Operation Red Wings”. As the title suggests a tragic chain of events take place afterwards. Rounding out the cast, is Taylor Kitsch (“John Carter”), Emile Hirsch (“Bonnie and Clyde”) and Ben Foster (“Contraband”). Kitsch and Berg are reteaming after their failed venture “Battleship” and the pressure for this to redeem them is immense. Both took a critical bruising and Kitsch was given the premature branding of “box office poison”. This film could be tantamount to proving those who wrote them off, wrong. Release Date: January 10, 2014 (Wide Release) 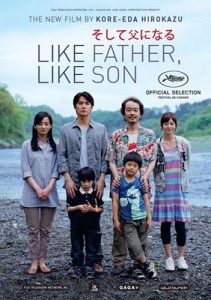 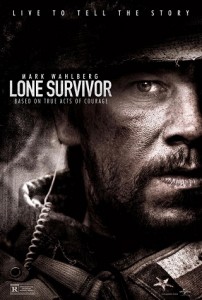 Like Father, Like Son: After sweeping through Cannes last year, this critically acclaimed Japanese film is finally making its way to an international release. The story centers on the aftermath of a baby switch. When the capitalistic patriarch (Masaharu Fukuyama) learns of the switch, he takes his time to determine which baby he wants. While, daytime soaps have been rife with baby switch storylines, theatrical films haven’t spent as much time on the subject. The remarkable angle that sets this film apart is the father being knowledgeable of the switch. The philosophical ramifications of a father questioning whether to claim his biological

Latest posts by Eclecticpopblog (see all)

View all posts by Eclecticpopblog →