Following the huge acclaim (see below) earlier this year for Matt Berry’s eighth studio album The Blue Elephant, on 26th November Acid Jazz Records will release Gather Up, a box set encompassing the singular musical adventures this extraordinary musician has taken over the past decade, offering a revelatory and fascinating insight into the working process of a genuine musical maverick and sonic explorer.

Over 10 years with Acid Jazz Records Berry has released nine incredibly diverse albums (including one live album). From the tangled-folk rock thickets of Witchazel and Kill The Wolf (which features the song from which this box gets its name), to the out-there explorations of Music For Insomniacs or TV Themes’ retro-kitsch delights, through the soul power in Matt Berry & The Maypoles Live or the twilight grooves of The Small Hours to the classic pedal-steel songwriting of Phantom Birds and the smorgasbord of psychedelic sounds on The Blue Elephant, Berry’s journey has produced a feast for the ears that twists and turns down more unexpected avenues than most artists could manage over several careers.

The Gather Up box set is the perfect summation of the past decade, and far more interesting and intriguing than a standard albums collection. Discs one and two, Gather Up Part 1 and Part 2, pulls together an excellent 21-track career spanning collection expertly compiled by Berry (also available as a separate, standalone release on 2LP or single CD), including non-album tracks such as ‘Snuff Box Theme’. No easy achievement considering the sheer breadth, diversity and volume of his exceptional musical output. 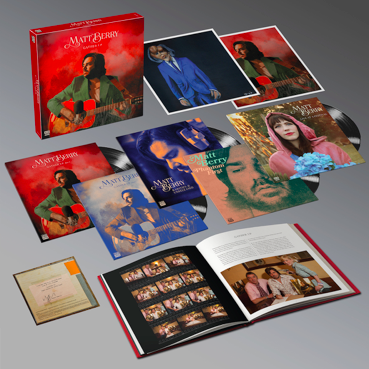 Disc three in the set is a selection of rare and never heard before outtakes. It includes cuts from Berry’s 2010 Myspace EP ‘Summer Sun’; outtakes from the Witchazel and The Blue Elephant albums; the ‘Catch Me In Time’ track featuring soul legend Geno Washington; a wonderfully raw and impassioned live radio session version of ‘Take My Hand’ featuring Cecilia Fage; embryonic versions of album tracks, and much more.

Disc four, Phantom First, comprises demo recordings of some songs which did and did not evolve into the Phantom Birds album. A fascinating listen, familiar melodies wrong-foot the listener, revealing Berry’s working process, involving different track titles and completely different lyrics. Fittingly so, considering Bob Dylan’s influence on this album.

Disc five, Live At A Festival, features five songs recorded over three festivals In 2015, including The Green Man Festival in the Brecon Beacons. Backed by his exceptional band The Maypoles – featuring The Bluetones’ Mark Morriss on guitar – Berry and his well-drilled band deliver a stonking and urgent, folk-psych driven set, including the storming opener of Kill The Wolf’s ‘Medicine’ into a heavy, fuzzy version of Witchazel’s ‘So Low’.

The last ten years have proved a remarkable journey for both Matt Berry and his listeners. Delving back into this 10th anniversary box set, you can’t help but feel excited about imagining what’s coming next, to discover where Berry’s ever changing musical philosophy will lead him on his journey.

“It feels like ten minutes ago that I first walked into Acid Jazz,” Berry reflects of the past decade. “It certainly doesn’t feel like ten years and eight albums when you’re in the middle of it. I know that once this is done we’ll just be into making the next thing. We’ve never been ones to talk about what we’ve done, it’s all about what we’re going to do next.”

Gather Up is available as a 5LP and 4CD boxsets.

A signed certificate of authentication

It is also available as a 21-track 2LP, double vinyl and single CD compilation, featuring Gather Up Part 1 & 2 – see below for tracklisting details.

Something In My Eye

Middle Of The East

Rarities & unreleased – a selection of rare and never heard before outtakes

Bigger Than A Dog

Catch Me In Time

Get Her Out Of My Mind

Make It Go Away

Peter Cleopatra And The Windmill

A Shot Rang Out In The Forest

You Danced All Night

Live At A Festival

This Feeling Track of the Day: Alan Triggs ‘Moonlit Mersey’