The ex-Stranglers frontman has recruited The Bard of Salford for a re-working of the Jimmy Webb classic 'MacArthur Park'. Jason Holmes was on location with the pair in Los Angeles as they filmed the promo video.

There’s a guy asleep on the grass verge and he looks like he’s dead. Over by the parking bays where a few cars haphazardly nose the high kerb, a dog is chained to a palm tree next to an empty shopping cart. The dog barks loudly when anyone comes near, its high plastic collar amplifying the sound. It’s angry. It can’t bite itself.

“This dog is loco,” says a man walking up to us. A deep scar marks his cheek but his eyes dance bluely in a weathered face. “He’ll bite anyone who comes near, even his owner.” He rolls a cigarette. “What you doing here today?” he asks casually.

“Filming.” I say, still tired from the drive over from Sunset. 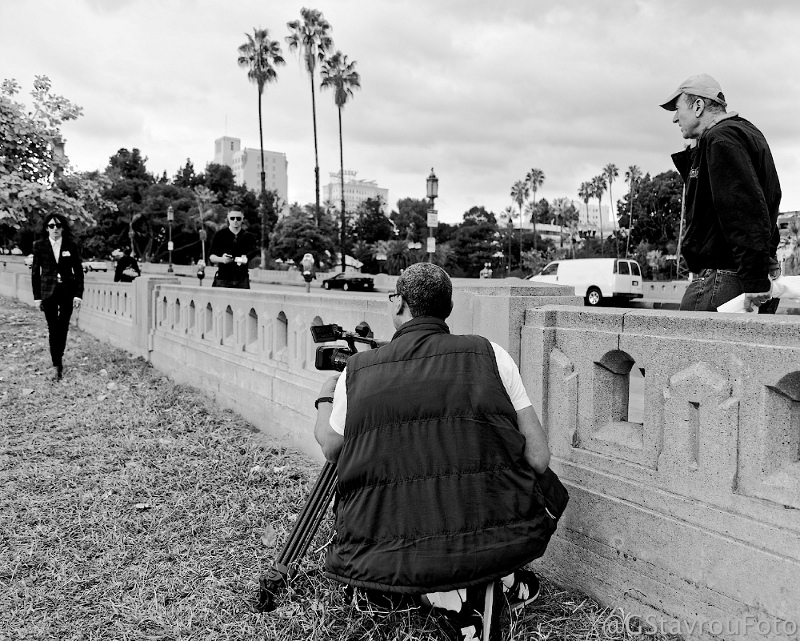 It’s noon in MacArthur Park in Los Angeles, a green, incongruous square of rolling land sliced in two by Wilshire Boulevard, the wind blowing hot then cold, but mostly cold. Pneumonia weather, and I left my coat back at the hotel. It’s LA after all. We all shiver a little. All but John Cooper Clarke who’s suited and booted and swaddled in a padded gilet as he waits for us in the 4X4.

He’s a man of precise words who has ridden the decades under his own influence. His face is one which has seen too much and yet, strangely, not enough. He’s calm, professional, ready to eke out his energy, expecting the unexpected, coiled as only an esteemed British punk poet can be when striding upon the stage that today, rather than being the Hanging Gardens of Basildon, is instead the City of Angels. 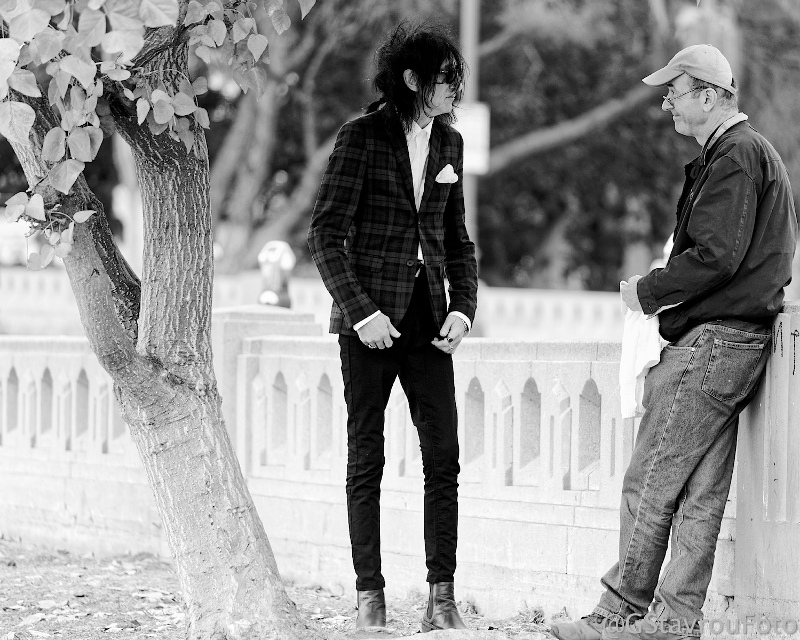 The project behind this convening of souls in LA’s Downtown is ex-Strangler Hugh Cornwell’s reworking of Jimmy Webb’s ‘MacArthur Park’, a song previously made famous by Richard Harris and then, later, by Donna Summer, Waylon Jennings and Woody Herman. With Ian Anderson of Jethro Tull on flute and John Cooper Clarke lending his gravelly tenor to this version, it’s a more considered, jazzed-up soundscape that’s on offer.

It’s November and the sun is fighting the clouds and losing. A greyish light coats the scene like dust and the lake at the park’s centre lies still like a metal disk. Dotted all over the grass as far as the eye can see are slumbering figures. Here, in the park, they’re resting. Slain souls with nowhere better to catch some shut-eye. Seagulls walk among them looking for food. 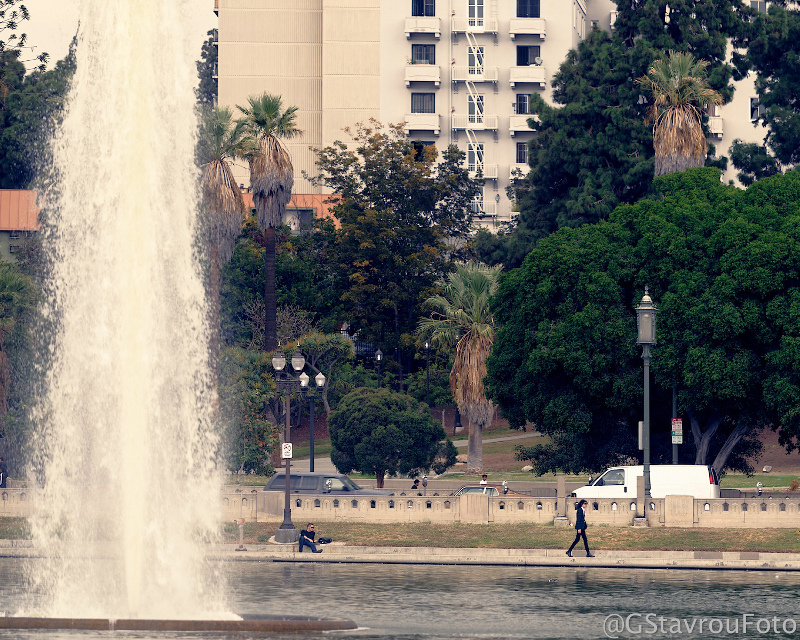 Cameraman Ben Thomas busies himself with the kit as the increasingly versatile Hugh, replete in baseball cap and resembling the late Tony Scott, double and triple checks the shooting script. This is his brainchild and today’s the shoot; tomorrow a chance for Messrs Cornwell and Thomas to garner any further covering shots they may feel they need. They’re deep in conference under a tree. JCC hears the barking and turns his head slowly in the direction of the dog.

The gang’s all here: there’s Hugh, Ben, JCC and his manager Phil Jones. There’s also myself and stills photographer Stavrou who have been allowed in for the exclusive. 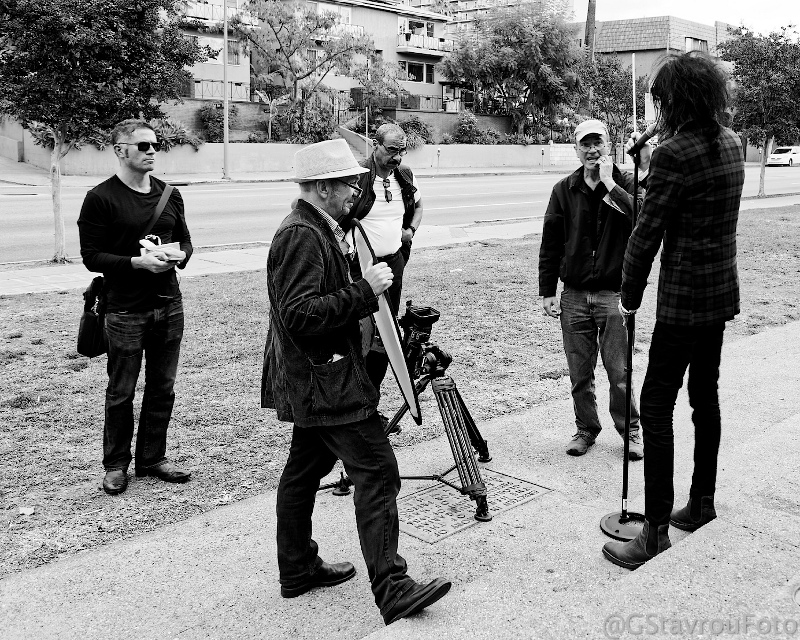 Over the road at the Park Plaza, a Hollywood film crew is in full swing. which is to say, they’re waiting around in droves between takes, idling between the massive trailers that carry the lighting rigs. We’re unencumbered by such studio trappings, shooting swiftly with one camera and a tripod and one tight script, the light an important factor as we begin. Hugh eyes the clouds and we get our arses in gear.

“See you fellas,” says the old man and walks away, smoking. The dog barks at him. “Ah, shut up,” he tells it.

We walk to the far side of the park, passing under a small bridge. A mid-’70s Chevy, so rusted it looks like a brick on wheels, sits on Wilshire, too far-gone to be stolen by anyone. Past a bank of palm trees, we set up just beyond a playground that swarms with Hispanic kids and their mothers. 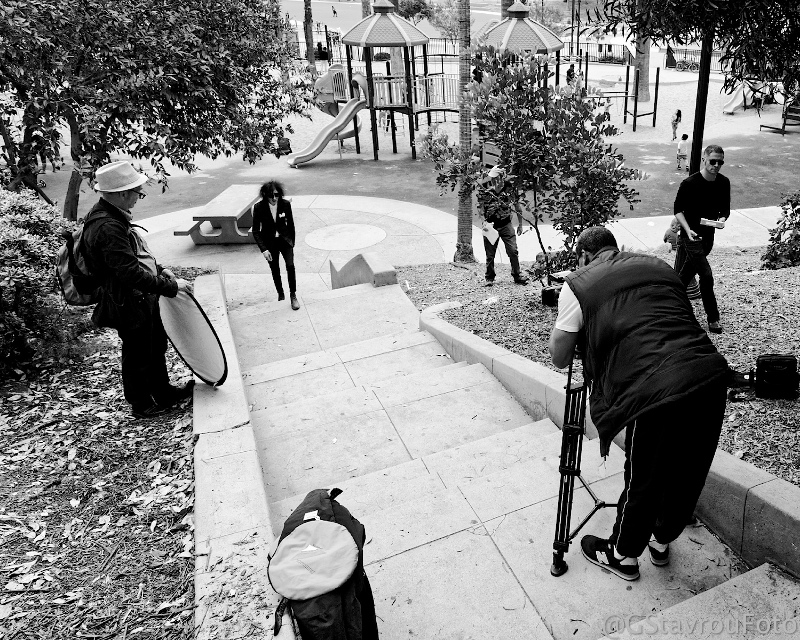 Hugh runs through the blocking of the scene for JCC. Ten minutes later and JCC strides around the corner of the slide for the fourth take and walks towards and past the camera. Some kids kick a ball and it bounces into shot. Take five it’ll have to be. The tables are cast in concrete and leaves swirl in tiny tornadoes against the corners of the walls.

Ben asks for one more take and it’s in the can in under three minutes. We shift locale. Another scene, the pages are being turned, scenes checked off by Hugh. We await his direction. 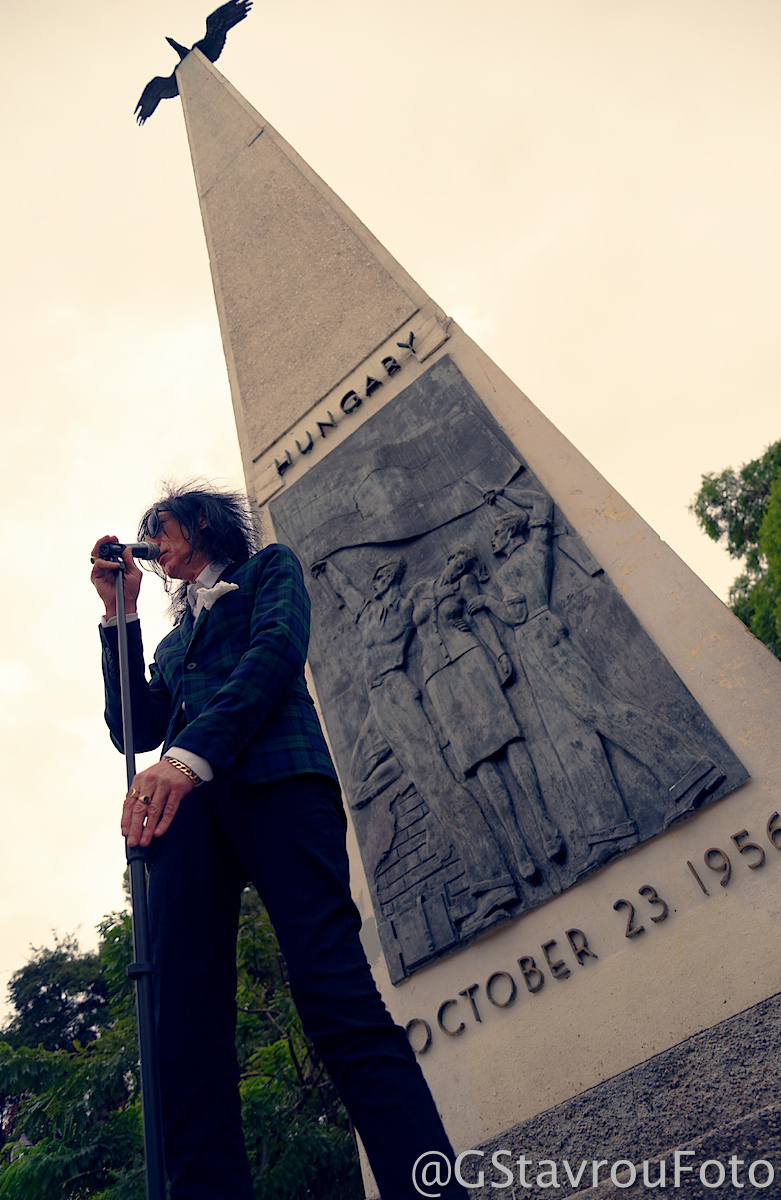 JCC stands before the monument erected in memory of the heroes of the Hungarian Freedom Fight of 1956 on the park’s northern flank, a white baton in hand. He sings, then on Hugh’s command flings the baton to one side and grips the mic stand and freezes. He does this four times to perfection. We move on to a flight of stone steps. I cue the playback, Hugh shouts action and I press play. JCC moves off and then stops. He can’t hear the playback. I up the volume. We begin again. Ben, unflustered, resets the focus and nods at Hugh. I hit play and track JCC.

The children watch us and then resume their game of soccer. Just another day in paradise for them, film crews as commonplace as stray cats.

We break for lunch and realise we’re ravenous. It’s harder work than it looks. Hugh decamps to Bibi’s Cafe on 7th Street. Cigarettes are smoked. And still the prone figures on the grass haven’t moved. Hugh returns, his arms laden with burritos which we promptly devour. We wash it down with superheated coffee. It’s all good, nourishing Honduran fare. It warms us and sets us up for the next location.

We split into two groups as Hugh, Ben and Phil take up position on one side of the park as JCC and I remain on the other. It’s the distance shot with JCC walking from one mark to another. I sit nearby and pass myself off as a park dweller, prone upon the grass, feigning indolence and inertia, the playback speaker hidden underneath me so JCC can hear the music. Hugh signals from afar with a white flag, I hit play and the short scene unfolds. We do it another two times and head for the final location, with JCC firing off jokes to keep us amused. The man, it would appear, is a dynamo after four hours of toil beneath a tinfoil sky.

The end is in sight, and it’s a stone bench fixed to the lip of the lake, dark looming palm trees separating us from the rest of Los Angeles, a city where people drink, carouse and relax, far from us as we concentrate for the final task.

It’s time for the cake of the Webb lyric to make its appearance. Hugh left the cake out in the car and goes back for it. We scan the sky, watch the gulls ride lukewarm thermals against a backdrop of skyscrapers.

Ten minutes pass. We’re on the far, southern side of MacArthur Park. The light is fading. We all realise at once that we’re tired. Make no mistake, filming is an exhausting and exacting business, even a project as swiftly enacted as this one. 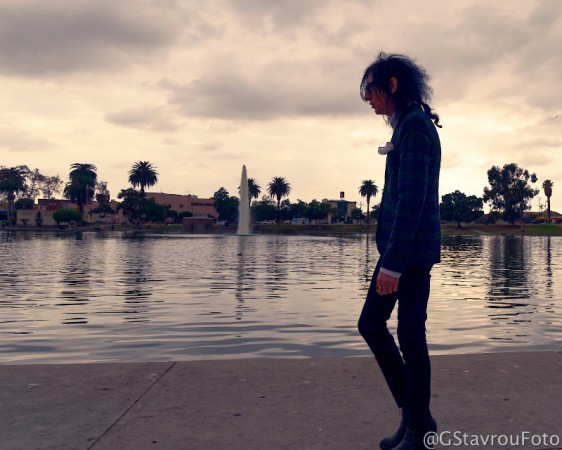 Hugh returns and passes JCC the cake which he holds before him, offering its emerald confection to the lake as would a modern-day pagan, his day sacrificed to get his old friend’s film made, additional live band scenes to be filmed back in London on Denmark Street. At their age, old rockers like these depend on gentlemanly agreements to keep their muses well fed. It’s the done thing because it’s the only thing you can depend on with a music industry still perennially convulsed.

And the shoot ends as quickly as it began, the only dilemma left to finesse being what to do with the cake. It’s decided: we must give it to someone, we must leave the cake in the park. 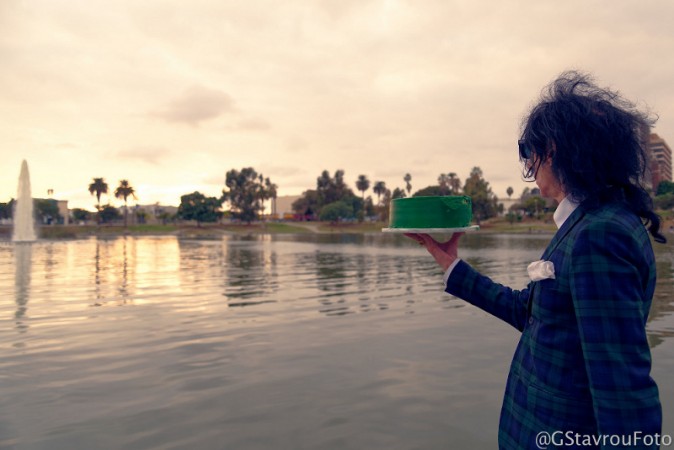 And there’s the unwitting recipient. We see her from far, a Japanese lady sporting a tangerine-coloured full-length coat and walking a small dog on a long leash. She’s overcome as we hand it to her. It’s right that the cake never leaves the park, we say, and she nods, unable to take her eyes from it, not yet coming to terms with the fact that she’s now stuck in Downtown LA with a large, baked item and a small hungry dog.

We wave and walk back to our vehicle, sated and content. It was all about the cake, the green, iced totem upon and around which all our efforts were based. And with that, it’s a wrap.

‘MacArthur Park’ will be released later in 2015