To the numerous, and misguided critics of Taylor Swift,

It must be exhausting pretending not to like the most likeable pop star on the planet. Why not take a break, suck out the ‘Bad Blood’, and accept Taylor Swift is actually a fabulous young woman?

I imagine your responses sound something like this: “She’s such a knob man – did you see all the videos of her giving personalised gifts to her fans? Plus, she’s dated half of Hollywood/too thin/not sexy/sold out/generic” and “Oh Yeah, then there was that whole Spotify thing, and when she called out Apple Music and won – why is she so stupid/selfish/annoying/uptight?”

Guys – Your attitude’s staler than the six month old bourbons in my Nan’s biscuit tin. If you listen closely to ‘Blank Space’ again, you’ll hear the sound of Taylor Swift maniacally laughing at how dumb you are.

Here’s a cold, hard fact: it’s not remotely cool to hate on a 25 year old woman at the height of her career, making intensely catchy pop-songs, and shooting phenomenal looking videos. Why do you insist on (hate, hate) hatin’, when you could be getting down to Swift’s ‘sick beats’?

I have a confession: I initially dismissed Swift’s music back in 2008 when she released ‘Love Story’ – but that’s because I feared the intensity of my own unrequited, teenage romances (I thought they’d strangle me to death if I continued listening). I started paying attention again when she released Red, and when I saw the video for ‘Blank Space’ in 2014 – a gap in my pop-loving life was filled. I had a ‘Blank Space, baby’ and I let Taylor Swift write her name there. 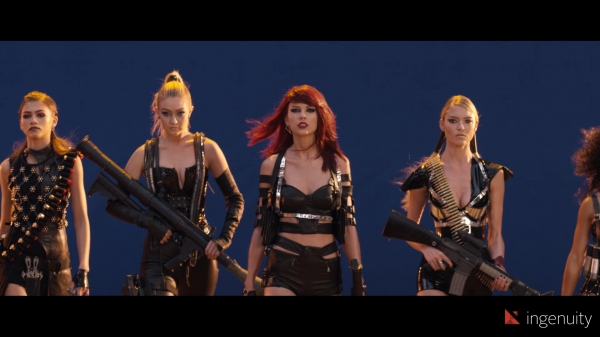 She is now the anomaly in my album collection – but I refuse to let people tell me she’s no good. Her femininity and romantic sensitivities are continuously criticised – but why can’t a girl just be in love, and then get mad about falling out of love? Why does everything need a wider context?

If you’re allergic to fun, or have a heart the size of a pea – maybe leave that copy of 1989 on the shelf for someone who’s actually prepared for it’s true pop glory. Don’t, however, assume it’s okay to sneer at fans of Taylor Swift who rely on her music to get them through a truly crap day. Don’t sneer at Taylor Swift for making music that’s not to your taste, or pretend that Ryan Adams’ covers are better. If you can’t stomach her blend of synths and romantic vocals – just keep quiet, and well, ‘Shake It Off’.

If you genuinely can’t hold in the hate (hate, hate), it will serve you well to remember that if you try to vocalise your negativity in any way, there are legions of Swift fans out there ready and waiting to take you down. Their strength and dedication is something you can’t even imagine in your ‘Wildest Dreams’.

Kate aka Leader of the T-Swift Sisterhood.

P.S. We are never, ever, ever getting back together.

For The Record: Joy Division-Unknown Pleasures