Laverne said: Gaz Coombes and Paul Weller were brilliant live and it’s not often you get the chance to see such big names like Holly Johnson singing classics like The Power of Love in such an intimate venue. Save the Children’s Christmas Tree Sessions was a great night, for a great cause and I hope everyone enjoyed it as much as I did!” 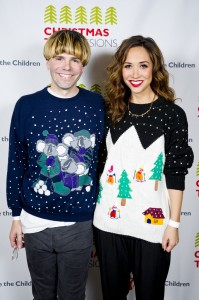 The gig took place at Union Chapel, London, with all proceeds going towards Save The Children’s Syria Crisis Appeal. The audience also saw sets from Northampton lads The Moons as well as a finale featuring Frankie Goes to Hollywood frontman Holly Johnson.

Musicians from Christmas Tree Sessions performed in festive knits in support of Save the Children’s Christmas Jumper Day. Join them by donning your Christmas jumper on Friday 13th December and donating £1 at www.christmasjumperday.org