Petrol Girls released their debut album Talk of Violence via Bomber Music on 18th November last year, and it’s sparked a riot of fandom, interest, and activism. The band have just announced a lengthy set of UK tour dates starting on the 16th of March in Newport, and concluding on March 25th with a show at the Stagshead Hoxton, London. They’ll also be touring with Strike Anywhere from the 21st of April onwards.

Petrol Girls’ vocalist Ren Aldridge “cannot wait to come back over to the UK, see friends and have a proper good shout.” Ren elaborates “I’m definitely not the only one feeling a bit overwhelmed by the state of politics right now, and touring always ends up being a great way of meeting people to rage, dance, hug and organise with. We’re also collecting phone video submissions to put together a video for our song ‘Touch Me Again’, which grew out of the demo chant “MY BODY MY CHOICE” and seems to be something we’ll be shouting a lot more given the escalating political attacks on women, wombs and marginalised bodies in general.”

Caustic and pertinent, Petrol Girls’ live show has to be seen in the flesh to really be experienced. The band combine manic jagged rhythms with vocals that range from furious screaming to intricate melodies and harmonies. Influenced by Refused, White Lung, Bikini Kill, Fugazi, RVIVR, Propagandhi, At The Drive-In, and War On Women; Petrol Girls have sculpted a sound and a performance that is not only explosive, but highly detailed and raucous. They identify as a feminist band and draw on personal experiences to challenge and ridicule sexism, as well as exploring wider political themes, such as alienation, mental health and the current anti-austerity movement. Sometimes desperate and sometimes defiant.

Information about how to contribute to the ‘Touch Me Again’ video can be found below, and full tour dates and updates can be found on Petrol Girls’ Facebook page. 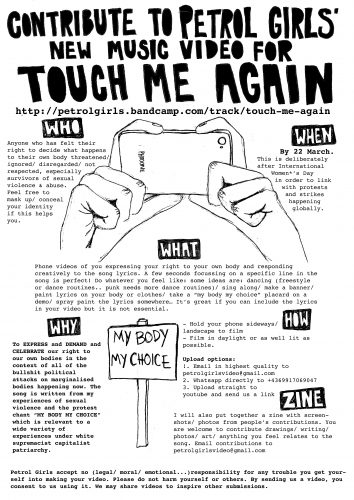