Didn’t get Glastonbury tickets in the resale? You’re not alone. The good news is that there is a festival featuring a line-up that’s basically the “Greatest Hits” of Glastonbury from this year and last, with a few that haven’t made it there yet and guaranteed better weather too! Held in the picturesque Dutch resort of Landgraaf, Pinkpop isn’t the only European festival to feature The Rolling Stones this Summer, but the rest of the line-up ensures that it’s the best. 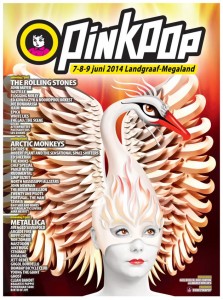 In fact, Glastonbury and Pinkpop have more in common than their line-ups, with both festivals starting out in 1970. While Glastonbury has taken a few years off down the line-up, Pinkpop (its name derived from the “Pinksteren” weekend when it’s held) has stayed strong, taking part annually ever since, making it the oldest and longest running annual dedicated pop and rock music festival in the world. In the last few years worldwide acts including The Killers, Kings Of Leon, Bruce Springsteen & The E Street Band, The Cure, Coldplay and Foo Fighters have headlined over the three nights, with newer acts and European bands featured elsewhere in the line-up.

If you’re lucky enough to have a ticket – or are hoping to get one – here are ten bands you do not want to miss while you’re there:
1. The Rolling Stones
Following last year’s headlining slot at Glastonbury – arguably the best there has ever been – Mick, Keef, Charlie & Ronnie continue their “50 And Counting” tour by closing the first night of Pinkpop 2014. Expect to be transported back to the 60s with ‘Satisfaction’, to take part in the biggest disco/rock sing-along in the world with ‘Miss You’, and to be reminded of how strong the Jagger/Richards partnership is with recent hit ‘Doom & Gloom’. There may even be a special guest or two…

2. Arctic Monkeys
Arctic Monkeys didn’t need to prove themselves, but 2014 highlighted how important the band is in today’s music scene. While fifth album ‘AM’ showcased a blend of R’n’B influences and Alex Turner’s trademark lyrical genius, the headlining slot at Glastonbury a few months earlier (opening with ‘Do I Wanna Know?’) was a defining moment for them, showing just how far they’d come since last headlining in 2007. Love or hate his inner-showman, it provides a talking point or two, not that a non-stop career spanning set with just as many memorable album tracks as singles won’t do that anyway.

4. Metallica
Rumours of Metallica headlining Glastonbury have circulated for years, but Pinkpop organisers have bitten the bullet and booked the heavy metal legends to close the festival (on a Monday night, bizarrely). Since forming 23 years ago, Metallica have become Gods of their genre, with albums including ‘Load’ and ‘Death Magnetic’ topping the charts on both sides of the Atlantic, and 91’s self-titled release going 16x platinum in America. Huge, classic thrash metal from “Rock And Roll Hall Of Fame” inductees… and nothing else matters.

5. Rudimental
North-East London quartet Rudimental set festivals on fire last year with their electronic/drum ‘n’ bass anthems, including #1s ‘Feel The Love’ and ‘Waiting All Night’ which transformed hungover fans of any genre into bouncing, beaming crowds. Now, two years after the release of their Emeli Sandé and Angel Haze featuring debut ‘Home’, let’s hope for some new tracks alongside the modern day anthems. FEEL THE LOVE!

6. Haim
Sisters Este, Danielle and Alana lived up to all ‘Sound Of 2013’ claims with festival appearances, classic girl-group songwriting and Fleetwood Mac comparisons. Debut album ‘Days Are Gone’ provided sun-soaked soft-rock, while a live highlight saw them as backing singers for Primal Scream at Glastonbury. Who could they join onstage at Pinkpop..?

7. Paolo Nutini
With third album ‘Caustic Love’ debuting at #1, Paolo Nutini cemented his place as one of the most successful male solo artists right now, and one who doesn’t stick to bland, recycled rules. A set-list featuring the acoustic hits of ‘These Streets’, the ska/folk blend of ‘Sunny Side Up’ and the soul of ‘Caustic Love’, and all from that effortless Scottish growl. What better way to see in a Sunday afternoon?

8. Robert Plant And The Sensational Shape Shifters
Although Led Zeppelin members continue to deny reunion rumours, seeing any member live is to see a living legend, and a co-creator in some of the greatest rock songs ever written. Recent setlists from Plant’s (Planet Rock’s “Greatest voice”) latest band have featured interpretations of Zeppelin tracks as well as other covers. If he were Axl Rose or Johnny Borrell he’d still be using the Led Zeppelin name…

9. Editors
It’s almost a decade since Editors released their debut album ‘The Back Room’, which took the gloomy bass of Joy Division, the euphoria of U2 and the mystery of Echo & The Bunnymen, before mixing it up to create moody tracks that sound stunning in the open doors. Now, following the release of their fourth album ‘The Weight Of Your Love’ last year, Editors sound better than ever, with the new songs following the same formula, which is no bad thing.

10. Limp Bizkit
“Now I know you’ll be loving this shit right here…” It’s difficult to believe that Limp Bizkit are a band who still exist, however it might be even more difficult to not do the ‘Rollin’’ moves when they take to the ‘3FM Stage’ on Sunday at Pinkpop. While Fred Durst and co released ‘Chocolate Starfish And The Hot Dog Flavoured Water’ way back in the first year of this millennium, it’s given it enough time to become a classic – and every festival goer needs a little novelty to perk them up in the morning.

ALBUM REVIEW: Towns ‘Get By’