Matching the larger-than-life persona that ‘Brother’ takes on, the vibrant, sporadic video for the single gives us a clear insight into what a Club Paradise live show would visually have in store for us.  Blinding lights, contrasting hues and deliberately-thrown shadows over the band members faces; the instruments, the sound and the style of Club Paradise take centre stage above all else. 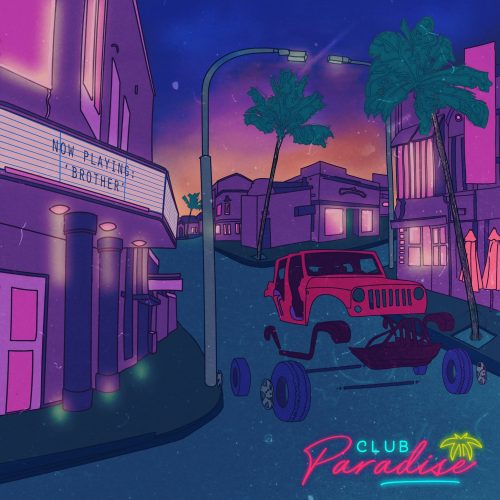 The hand-held, roving camera gives a DIY-feel to this otherwise polished quartet. Perhaps this could be a metaphor for the boys in the band constantly improving, tuning and begin wading their way through the music industry?  One thing is for certain; if this indie-pop group continue releasing anthems like ‘Brother’, the seas will part in their presence.

The track’s core message, according to frontman Young, is up for debate.“If you listen to the chorus, it is oddly about Martin Shrekli, and his drug price hike.  People are working but still can’t afford what they need,’

“Really, it’s up to your own interpretation, where do you feel cheated?”

It is sleek, yet rough around the edges, über cool yet hiding away its key core – the video and meaning behind ‘Brother’ is there to build and indulge your own interpretation within.  One thing we know for certain though, this is the first output of many that we are about to hear from a more-than-promising outfit.

Watch the ‘Brother; music video below.  For more information, or to keep up with Club Paradise’s movementsm, visit their Facebook page.

This Feeling Track of the Day : Generation ‘Cheapskate’