Barcelona festival Primavera Sound have announced the full line up for this years event.

Primavera Sound 2014, sponsored by brands such as RayBan, Adidas and Heineken, will be held from 29th-31st May and will include performances from the likes of Queens of the Stone Age, Pixies and Chvrches.

Also on the bill are house duo Disclosure, Foals, Mogwai and Jagwar Ma, as well as reformed 90s shoegazers Slowdive.

The festival revealed the line-up through a short film, mysteriously entitled ‘Line-Up’, which was premiered in cinemas and online. You can watch the 30 minute film below, if you’re that way inclined, otherwise the full line-up’s just below. 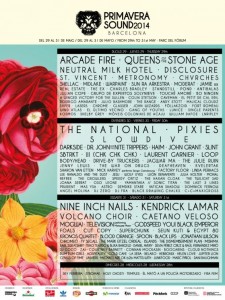 Tickets are available here with an option to pay in instalments.

The Cure And Suede To Play Teenage Cancer Trust Gigs