For this weeks For The Record, we shine the light on the female artist who is not only changing the game as we know it, she’s completely reinventing it. Releasing ‘M3LL155X’ earlier this year, FKA Twigs did not disappoint with her fiercely inventive pop sounds. Daring and provocative in not only her music, but accompanying visuals, Tahlia Barnett released an 18 minute video alongside the record and continued to rival any creative efforts gone before her.  Gigslutz contributor, Kate Crudgington, takes a closer look at why ‘M3LL155X’ is exactly what the pop world has been waiting for.

With the release of her debut album LP1 in 2014, FKA Twigs was catapulted in to the spotlight. No longer the ‘Video Girl’ to the Jessie J’s of this world, Twigs – aka Tahliah Debrett Barnett – shed new light on the realities of desire and loneliness with unrivalled artistic confidence. She challenged perceptions of female sexuality; championing the casual encounter and the late-night lovers we infuriatingly fall back on – all this, whilst never losing sight of herself. LP1 remains one of my favourite records, and I still cling to its sound for comfort. 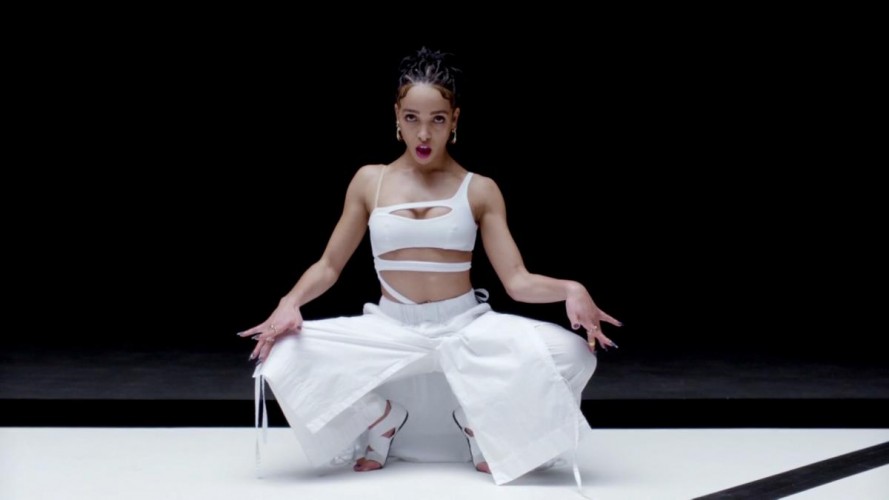 It is her third EP M3LL155X, however, which transformed my already glowing opinion of her in to pure adoration. Darker and sharper in sound, this EP helped dissolve the pain left by what can only be described as ‘an utter shitstorm’ of a ‘love’-life. After a series of cryptic and reserved posts on social media earlier in the year, Twigs revealed the accompanying video for the extended release, and I watched it open-mouthed and unblinking. Her sound, vision, and hypnotic choreography left me breathless.

Opener ‘Figure 8′ begins with Twigs’ trademark clicking drums and intoxicating electronics. In an interview with Zane Lowe, she explained the track was named after the continuous figure eight hand motion in voguing, and was a reaction to the overwhelming exhaustion she experienced whilst touring. “You’re so fucking fake that it’s hurting me” she venomously confesses; uttering the words at a speed which replicates the resentment they must’ve been written with. The video features model and muse Michele Lamy. She’s dressed as a human anglerfish, a creature from the oceanic depths who lures and dazzles its prey with the aid of a luminous organ. These fish are also notable for ‘extreme sexual dimorphism’ – meaning the female of the species is bigger than the male – which is generally unusual. This description fits both Lamy & Twigs. Both women play the roles of the master and muse in equal measure – despite what the media says about their romantic relationships.

Things take a sinister turn on second track ‘I’m Your Doll’. I can’t pretend I enjoy watching a man salivate over an inflatable female torso, but I like the way the track makes the idea of submission a powerful choice; an act of defiance. Admitting to feeling like “a loaded gun” is difficult when you spend most of your time trying to keep all of your desire under control. Twigs looks non-plussed in the video, unmoved by this man’s lust for her; which leaves her unsatisfied and unfortunately impregnated. As uncomfortable as it is to watch Twigs as a play-thing, it’s reassuring to remember that she wrote, choreographed and directed the video. She has absolute control at all times, honing her unusual vision from start to finish.

Love at first listen occurred when I heard ‘In Time’, and I frequently return to this track when my confidence takes a crunch. Twigs gazes directly in to the lens, penetrating the glass as she knowingly states “The way you dismiss me will turn in to missing me”. She calls out her antagonist – “you’ve got a god damn nerve” – whilst working though her aggression, clad in double denim and supported by two backing dancers. The climactic nature of the final chorus, which sees Twigs excrete gold, turquoise & fuchsia paint from between her legs – much to the disgust of the male who looks on through some kind of Big Brother lens – leaves her standing tall, proud, clothed in white; fearless and free of those who’ve been “testing [her] sane”.

‘Glass and Patron’ sees the return of Twig’s twisted artistic pregnancy. I’ve never tasted Patron tequila, but I know if I ever come across it, I’ll be necking it in large volumes and asking strangers “Am I dancing sexy yet?” as I attempt to replicate Twig’s impossibly beautiful choreography. With the aid of alcohol and fashion, you can “teach yourself to rise from ashes fuelled from lust and fire”, and that’s exactly what Twigs does on ‘Glass and Patron’ as she “holds that pose” of defiance.

‘Mothercreep’ isn’t featured on the M3LL155X video, but it closes the EP in a blur of whispers, howls, and fearless beats with the promise that she’ll “be there soon”. Whilst there’s room for anxiety, there’s an absence of doubt. Yes, Twigs is “jealous”. Yes, she “creeps” in search of roots and security; but this exploration is never in vain, never in fear. FKA Twigs is always the seducer, even when playing “the doll” for the male gaze. She articulates what others are too self-conscious to reveal; using her limbs and lyrics to dazzling effect. I had no idea my listening life was missing something until I heard her – and I can’t imagine a time when I won’t be enthralled by her.