I was asked to write an intro piece for Gigslutz ‘For The Record’ section where I write about an album I love/d that maybe was under appreciated, or just want to eulogise about. I sat there for what felt like hours with hundreds of albums rushing around my head but one album stuck out from a band that nobody rarely talks about much anymore. The album was ‘Pinkerton’. Pinkerton is the second album by the American alternative rock band Weezer, which was released on September 24th 1996. When I first heard Weezer (of course ‘Buddy Holly’ was the first song I heard) I thought of Weezer as a little of a novelty band, as many probably have, until I dug a little deeper, purchased their wonderful ‘Blue Album’ debut, and realised the immediacy of their feel good, summer / pop rock songs. If any of you guys remember, Pinkerton though wasn’t received well when it came out in ’96, mainly because it was so far away from the critically acclaimed first album. But it was a masterpiece in disguise. Although it takes a few listens, once you get to truly appreciate the percussion, heavy basslines, and great solos, Pinkerton becomes one of your favourite albums of all times. Just about every song really seems to encompass this amazing sound. 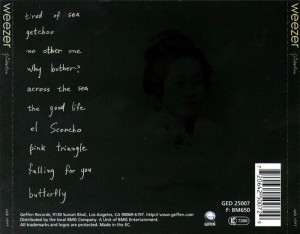 Pinkerton… where to begin? Pinkerton is named after the character B.F. Pinkerton from Puccini’s opera Madame Butterfly, and the album plays as a concept album based loosely around the opera. Like the Puccini opera, the album includes other references to Japan, Japanese people, and Japanese culture from the perspective of an outsider who considers Japan fragile and sensual. This was the next release in the winter of 1996 for Weezer. It came shortly after their huge success of the Blue Album with its catchy riffs, quirky videos, and hidden meaning that were hardly ever really understood by the fans. Most Weezer fans favour either Pinkerton or ‘The Blue Album’ as Weezer’s best (the Green Album is generally accepted as inferior to these two). The majority of them favour Pinkerton. But why? Pinkerton was a commercial failure, at least compared to the Blue Album. When it was first released, no one liked it. But time changes everything. On the surface, Pinkerton sounds like a desperate, overly emotional and possibly even annoying this-is-my-life-story kind of album. With time, it evolves into one of the most mind-blowingly awesome rock albums of the nineties. Pinkerton works as well as it does because it’s a deeper, more candid evolution of the themes on 1994’s ‘The Blue Album’. It’s bitter and sincere, manic and sad, ironic and detached, quintessentially 90s, and of course catchy as hell. But predominantly, for me at least, this is unique because it manages to be absolutely hilarious while remaining sincere and without ever coming close to approaching “novelty act” status. 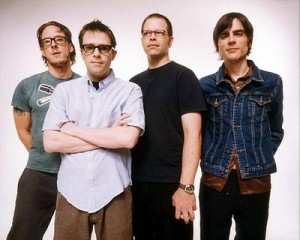 The instruments squeal before during, and after most of the songs, you can hear the amp buzzing when no one is playing and there is a mistake or two. But it’s these things that make Pinkerton work. It’s not supposed to sound perfect, it’s meant to be raw. The raw lo-fi sound makes this record sound even more personal and the lyrics sound as though they are copied directly from Rivers Cuomo’s diary and really provide an insight into what feeling loneliness and despair are like in ‘Tired Of Sex’ and ‘No Other One’, loss of hope with women in ‘Why Bother?’, falling in love in ‘El Scorcho’ and ‘Falling For You’, and even falling for a lesbian in ‘Pink Triangle’. The two best lyrical efforts are ‘Across the Sea’ and ‘Butterfly’. ‘Across the Sea’ is the story of Rivers receiving a fan letter from a Japanese fan in which she showed genuine interest in learning about him and his wanting to see her.

Listening back to the album now, Pinkerton is one of the best albums I’ve ever heard and definitely one of the best of the 90’s. The album personifies perfectly, everything that Weezer stands for, and it grows on you more after every listen. The music is perfect, the lyrics are stupidly terrific, and quite stupid to be perfectly honest, but in a wonderful way… No other album I can think of has packed so many great guitar solos and so many great one-liners into 34 minutes. Pinkerton was a breakthrough for Weezer’s sound and pivotal in the movement away from grunge. It showed a new found sense of dynamics and a great leap in songwriting and has greatly affected an entire genre of music, and is credited by many bands as a direct influence on their music. It is alternative rock perfection and it’s a crime that most fans haven’t even heard a song from it. If you’re reading my words, do yourself a favour and check out this album! Let it grow on you! You’ll be eternally indebted to me.