B-b-bassline. Just one of the things that Reverend & the Makers bring to their hometown city of Sheffield’s O2 Academy. Opening with ‘Detonator’, one of the catchiest tracks from their new album, the band establishes the raucous, lively atmosphere that will dominate the course of the evening. A couple of things you should know before attending a Reverend gig: If Jon McClure tells you to jump, you jump. He wants you to sing? You shout. It’s loud in here – deafening even – and unadulterated Yorkshireness from the second the band walk on stage. 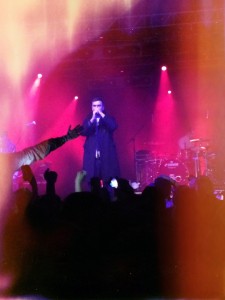 Beer cups are flying all around me (with god knows what in!) and there’s the usual football chants in anticipation of the return of Jon McClure and his merry men. The band’s new album ‘Thirty Two’ stormed into the charts at a respectable Number 13, and although it has been nine years since the band first introduced us to their distinct, indie-electronic sound, it’s safe to say that people still can’t get enough. “All the people want is b-b-bassline” is certainly still the case.

The setlist is carefully crafted and unrelenting; a perfect balance of McClure’s political commentary and the sing-a-long tracks where an anthemic chorus goes without saying. ‘The Only One’, the single from Thirty Two, is third on the bill and despite being somewhat slower in tempo it sounds fantastic live. It just works. With the chorus “I want you to make me feel like I’m the only / the only o-one” there lies a pulsating, psychedelic groove that has the audience singing along in no time. Dedicated fans sing along with bare-faced confidence – derived from the frontman himself, no doubt – to the new material that only came out in February of this year. No mean feat, when you’re practically in a rugby scrum, too.

The band knows what they’re doing and the atmosphere is kept up consistently by this hard-working unit. Although McClure often steals the limelight from his bandmates (well, he is the frontman, it happens) the collaboration on ‘Different Trains’ with ‘Baby C’ Joe Carnall is a gracious nod to the talent within the group, and provides a bit of light relief for us as the audience. Of course, it wouldn’t be a Reverend gig if the iconic ‘Heavyweight Champion of the World’ and ‘He Said He Loved Me’ weren’t played, so of course they are. The latter, we’re told, is for the ladies in the audience. And boy, do the women of Sheffield know how to sing “he said he loved me / he said he needs me”. 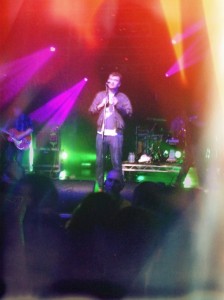 Concluding with ‘Silence Is Talking’ the audience is left wondering where the evening has disappeared to – time flies when you’re having fun, though, of course. For well over an hour the band has had the place pumping with their unrelenting bassline, infectious melodies and Jon McClure’s banterous ‘sermons’ that the ‘Reverend’ can’t help but impart between tracks. What sets Reverend & the Makers apart from other artists of their genre is their connection with the audience. Jon McClure is a man of the people in a way that Alex Turner, with his glamorous LA based lifestyle, can no longer claim to be.

If you thought that was it, then you’d be wrong. The night is far from over. Grateful to the devoted fanbase that has allowed the band to be onstage tonight, an acoustic encore outside the venue is their way of saying “thank you” to the audience for our support. An acoustic rendition of ‘Miss Brown’ and a cover of The Specials’ ‘A Message to You Rudy’ ensures everyone goes home with massive grins on their faces, content with ‘The State of Things’ and a little bit in love with the ever-hubristic Jon McClure.