The Legitimate Peaky Blinders festival was celebrating ‘100 years of The Peaky Blinders’ (e.g. it’s been 100 years since when the first series was set, 1919) and it was amazing to see how much everyone threw themselves into it.

Taking over two streets and a car park in Birmingham, the festival was filled with 100’s of people dressing up for the occasion and even had stands selling flat caps as well as a company selling a full tailored, Peaky Blinders style suits, (which Frank Carter appeared in later in the day). Along with some great food, a carousel with a brass band, a Peaky Blinders IPA, and of course some amazing music, it was through and through a really great festival.

The Sunday of the festival saw FEET taking to the BBC introducing stage at 6pm sharp. ‘Afternoon’, lead singer George greeted the audience, as the band launched into their first song, a suave track that started slow and picked up throughout and carried on this way throughout their set. The band demonstrated some very impressive moves, including a knee slide from the bassist, lead frogging from one guitarist and the other guitarist playing behind his head, that made their set that little bit more quirky and cool, leaving a lasting impression on the audience. “That song about Petty Thieving was a joke!” George was quick to tell the audience, before they launched into their last song ‘Outer Rim’, the crowd laughing and singing along.

Clashing slightly with FEET were Slaves who were performing on the main stage, which had been built onto a car park, however, the concrete ground wasn’t holding back attendees from moshing along, flat caps in place. 30 seconds into playing Chokehold, drummer Issac cut the song, unhappy with how the drum was rattling every time he hit it. Stage crew ran onto to help fix the issue, with Isaac telling the audience, “if only we had a fucking high hat, do you know what I mean,” referencing their previous song, ‘Fuck The High hat,’ laughter rippling around the crowd. However soon enough the problem was fixed and Slaves jumped straight back into playing an energetic, kicking set, that warmed up that Sunday afternoon. 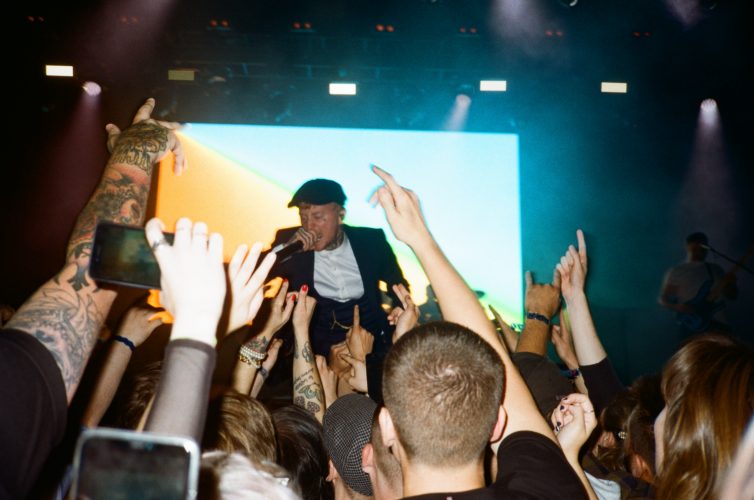 After Slaves, Frank Carter & The Rattlesnakes took to the main stage, each donning member a flat cap and Dean and Frank fully kitted out in true Peaky Blinders style. A short while into the set Frank disappeared from the stage, with his voice still being heard through the speakers, leaving audience members looking around in anticipation to see where he was going to end up. And of course in true Frank Carter style, he appeared on the front barrier, climbing into the audience, who were more than willing to hold him up. It’s fair to say that Frank definitely spent more time in the crowd then onstage, as he somehow managed to keep things controlled, telling everyone to stay safe and not let anyone get hurt, walking around with a protective circle around him, still delivering an amazing performance.

The set, of course, ended with the infamous song, “I Hate You”, attendees still singing the song to each other as they left the site, after a truly great day.