I’d been waiting to see Simon Fowlers new folk act Merrymouth live for months and finally the Ocean Colour Scene frontman brought his new band up to Scotland.  The live show consists of two Acoustic guitars, a Hammond organ and a violin in true folk style.
Opening with the energetic folk song, ‘The Trees They Do Grow High’ was a bold choice, the crowd was not a normal OCS crowd.  It was a much more civilised affair with wine rather than lager.
Of to a flying start, Simon follows this up with some top banter in between the songs.  Sometimes not playing for intervals of 5 mins.
The interaction between the band was truly fantastic to watch, it made for a better show.  Slow paced, relaxed, hilarious banter and all backed up by what can only be described as stunningly beautiful music.  I didn’t honestly believe I would like the set so much.
The crowd favourite was the jumpy ‘Midst Of Summertime’ whilst I am am personally torn between the slower ‘Shadow Knows’ or ‘Sweetest Words’. What can I say i’m a sucker for the three part harmonies.
For die hard OCS fans, of course Simon played his famous encore track Robin Hood… majestic!
I cannot recommend this live show highly enough
@jackrowberry 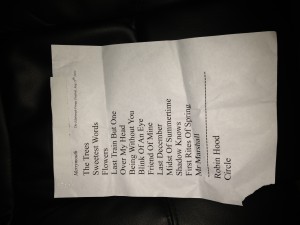