We’re not far into the festival when Friday night’s pier stage DJ throws down Fleetwood Mac’s ‘The Chain’, uninterrupted, between heavy drum n bass and micro house tracks. It’s at this point you realise that Soundwave (not to be confused with Australia’s heavy metal weekender) is a festival of surprises. Some 4,000 people have made their way to The Garden Tisno for five eclectic days of electronic, reggae, jazz, afrobeat and hip hop. Some have hitchhiked, some have flown, some are doing the incredible festival circuit that Croatia has to offer (Hideout, Outlook, Dimensions, Electric Elephant – this is the place to be) to experience the greatest line up to date.

Here’s a hundred reasons why you should be at Soundwave Croatia 2014 cunningly disguised as a festival review.

Solko take the main stage on Thursday, a seven piece of saxophones, guitars and drums who fuse speak-easy reggae beats with heavy percussion and Dutch Uncles-esque vocals. It’s no great surprise to hear them described as “the most exciting act in the UK right now” – their explosive jazzy sections that are at their most intense in ‘Take The Blood’ are easy to get caught up in. Being in the first few acts to perform on the floral-bordered stage is an unenviable task but they entertain a big crowd who move to the music in the golden hour of the day. It’s odd to discover their roots are in Suffolk as their sound is much bigger than any visions of the picturesque county. Solko’s summer is peppered with festivals and they’re certainly worthy of a watch.

Following Solko are Renegade Brass Band, a group that marries a full brass band with a rapper and a scratch DJ. Some things are so crazy that they just work and RBB are an exciting prime example of this. It takes 8 horns, 2 percussionists plus MC and DJ to form such a fresh, jazzy sound. Trumpets climactically build for the legendary opening of Red Hot Chilli Peppers’ ‘Can’t Stop’ and meet vocals reminiscent of Rage Against The Machine’s Zack de la Rocha – punchy and perfectly aggressive. Blurring the lines between a gig and a wild party, they make themselves accessible and unforgettable.

The cartoon style that DJ Yoda samples has forever set him apart in the busy realm of DJ’s and Thursday night was no exception. An hour long set of genre spanning tracks magnetised a crowd and if not for licensing laws, he’d be scratching for much longer and the crowd would welcome it. Despite a swarm of flies forcing him off stage at one point (festivals abroad are unpredictable), Soundwave remains his favourite foreign festival; “the guys who run it have an incredible line up every year. I always try to stick around for a few days”. Across his festival set and after party set at outdoor mega-club Barbarellas’, we got Biggie Smalls and Fatboy Slim amongst funk and traces of country and western. DJ Shadow follows, serving up a set of more experimental and obscure tracks, something to be expected from a man who has a record collection of 60,000. He delivers on a promise of a musical journey; “just when you think it’s gonna go that way…I’m gonna take it another way” he announces before delving into his own ‘Warning Call’ featuring Tom Vek and Ace Hood’s ‘Bugatti’ (it wouldn’t be a real Shadow show without some hip hop sampling). 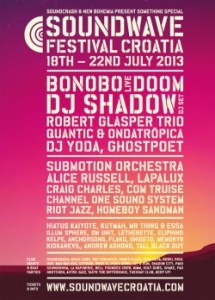 MF Doom’s Friday night main stage show draws a twilight crowd from 12-1 am. The cargo shorts and loose white linen shirt he sports are indicative of his set; relaxed and casual. The underground masked hip-hop hero isn’t a huge performer. Standing before a captivating monochrome video of dark eyes behind a signature silver mask, Doom raps to a sea of heads bobbing like buoys to the beat. Hip hop doesn’t always translate at festivals and there’s a sense that tonight is for those already familiar with his skilful lyrics and clever reference points. Otherwise, it’s something of an uneventful set. Although his history of sending imposters onstage in his place will always have you guessing whether you’re watching the real MF Doom at all…

A post-Doom crowd head to Croatia’s coolest outdoor haunt Barbarellas for Hoya:Hoya, Illum Sphere, Eliphino, Jonny Dub and Jon K who supply megamixes of house, drum n bass and dubstep, each with a distinctive style that sees lighters in the air and heated dance offs. 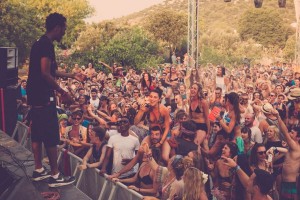 There are certain Soundwave acts who make themselves impossible to be ignored. Riot Jazz undeniably top this list, a nine piece brass band fronted by MC Chunky who take audience involvement to the highest heights. They grace main stage twice as well as a gig in the sea(!), each time delivering emphatic jazz with undertones of soul and hip hop. Renditions of The Human League’s ‘Don’t You Want Me’ are received with hundreds of voices singing back. Tracks like this feel too clean and polished on their Soundcloud and can only be fully appreciated live. If you get that privilege, expect Mexican waves (or soundwaves as MC Chunky more appropriately referred to them as), expect chants and expect to discover the craziness of a sousaphone. Another group on top of their game right now are Channel One Soundsystem, an incredible dub reggae duo run by the coolest men on this planet – Mikey Dread and MC Ras Kayleb. They were masters of Thursday’s boat party and of Saturday’s hour and a half main stage slot, sending out the most peaceful of reggae vibes and proving how music is a way of life.

“Funk and soul, that’s how I roll” voices a low-toned Craig Charles (yep, the Red Dwarf and Corrie star) from the wooden booth of the pier stage. Previous Soundwaves have seen a Craig Charles set…without Craig Charles. While he recovered and worked out his left from right again (that’s as delicately as I’ll put it), his boat party set was played in place. This year however, he’s made it and his set is incredibly accessible. The classics he lays down (think Stevie Wonder – I Wish through to Bee Gees – Stayin’ Alive) see him spinning and singing along. I wouldn’t hedge any bets on seeing his infamous Funk and Soul Show at Soundwave 2014, after the music cut out completely leaving a wide eyed Craig as clueless as we were… 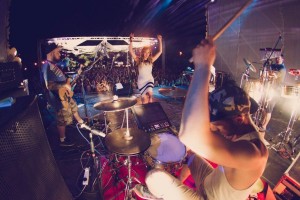 Sundays are, by definition, created for relaxation and it doesn’t get much more mellow than headliners Submotion Orchestra and Bonobo. Ruby Wood’s sweet vocals are out to surprise with jazzy kicks that come from a classical and jazz scholarship background. They melt hauntingly with funky synthesisers, Cuban-style percussion and scattered drum beats, constructing an ethereal soundscape that’s difficult to replicate. A slight feedback occurs throughout the set but by no means tarnishes the sound. There’s a long and anticipative wait for Bonobo and the main stage area is drawing the biggest crowd of the festival. Simon Green takes ownership of the stage tonight; he wholly possesses it with the perfect union of classic Black Sands tracks and favourites from The North Borders. The hypnotising surrealism of ‘Cirrus’ feels like the climax of the night as the crowd becomes a swarm of closed eyed Bonobo believers. The beautifully atmospheric ‘Kiara’ comes without the orchestral string opening tonight yet still delivers the shivers you’d expect. Bonobo is accompanied by a full live band tonight plus a gorgeous soul singer. Both combine to bring to life tracks like ‘First Fires’ and ‘Stay The Same’ and propel the songs into a new dimension.

Being able to visit all corners of the festival site in no more than five minutes creates the absolute intimacy of Soundwave, a quality that makes catching a great festival like this in its early years immeasurably rewarding.