The weekend started with a leisurely drive to Leicester. Now I have an deep rooted dislike for the place. I spent a single year of uni in the ‘city’ thanks to a set of horribly miscalculated A Level predictions and a desperate need to leave an obsessed boyfriend; I had hoped for drug fuelled benders and Serge Pizzorno wannabes than I could shake a stick at but was greeted with a complete lack of any music scene, a set of incredibly tacky student clubs and a student life similar to that of a 14 year olds Thursday night. So, unpleasant memories to say the least.

We arrived there with very little thanks to Google Maps and me already a bit tipsy having opted out of driving, and were greeted with what can only be described as organisational chaos. Saying that, I don’t even think chaos would be the right word seeing as the problem was that there was very little going on. The girl we were told was in charge of the organisation (whose name we didn’t get so was interchangeable with pretty much any female name over the weekend) told us, after looking around her in a confused daze for about a minute, we weren’t supposed to be there until the Friday, so obviously very smugly armed with an email confirming the contrary I charged over and got us in. I could discuss Shirley’s people skills for some time but I suppose this happens with small festivals.

We proceeded to put up the ‘teepee’ (cheap triangle shaped tent that my long term festival friend Amy insisted on buying) while dodging wasps, insects and also other ‘media’ types. The stages were still being put up and there wasn’t an bar open, which meant the Strongbow ran out at a very alarming rate. We were camped near some ‘volunteers’ who I named Ginge (obvious), Wonks (very wonky eyes) and Gnomey (little short fella who looked like a gnome and wore Harem pants, nuff said). Now at this point I was getting drunk and bored, and for anyone who knows me, this is when I’m at my meanest, so you can only imagine my anger when on MY phone, these absolute cretins changed the music from Tellin’ Stories to some sort of Mumford and Sonsy shit. At this point I gave up on the night and went to calm down (sleep in the car till the morning).

On Friday we woke up to find we were starving and our ‘preparation’ had stretched to the Strongbow we drank last night and 6 Belvita biscuits. Obvious option was a Morrisons breakfast so we went past Julia at the gate and got off to a full English 6.2 miles away (our route was actually about 15).

We got back and headed off bevvies in bags, I treated myself to the obligatory mid morning Lebowski-esque White Russian and was in quite good spirits given the fury I’d felt over the song changing the previous night. We were both struck by the volume of pre 18 festival goers. This is the first festival ive ever been to where the queue for the bar isn’t hideously long, we soon relaised this was due to the lack of ID owned by the customers. I think the festival is family orientated to a point, especially during the day, with vintage stalls, a sand pit and facepainting.

The layout was a bit weird, mainly made up of small tents with bands doing Arctic Monkeys covers (we heard a strange rendition of Alex Turners version of Love Machine). There were a few DJs playing to strangely sober crowds of rich looking farmer types wearing their ‘festival outfits’ fresh out of the Topshop window display, and everyone looked incredibly civilised, there was no sign of an afternoon overdose or uncontrollable vomit, must be a sign of the times… or a sign we spend too much time north of Stoke.

By this point we’d found our way back to the Main Stage to see Dexters, a band who I’d been looking forward to seeing after stumbling across their Soundcloud. They were a nice little breath of fresh air, energetic and interesting, it’s a shame the crowd didn’t follow suit! I always feel dead sorry for a band when I think they deserve more support than what they’re getting, I think this might have been down to the fact they were put on too early in the day and maybe should’ve been on the same day as the Enemy for the dayticketers. I had a little chat with Dexters after their set… 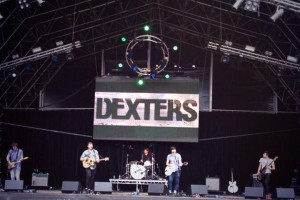 Jaguar Skills was the surprise feel good act of the weekend! He does this cut n paste type thing, irrelevant of genre or era and mashes it all up till it sounds decent. I’m usually strictly a guitar type bird, so was shocked when I went on to shout in Amy’s ear: “I feel like I’ve took summat but I ‘aven’t”. This may have been in part to the joy of hearing The Verve, even if it was only a sample, but either way, Jaguar Skills made me feel good and have a little dance! 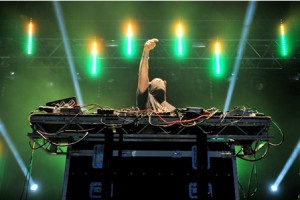 Also of note was obviously probably the biggest band of the weekend, The Enemy on the Saturday night. I am a bit in love with Clarkey so was just happy to see him storming through the classics, chucking in a decent amount off We’ll Live and Die in These Towns, and then covering Sit Down by James.

The line-up did consist of mainly smaller bands, but with Strawberry Fields only being in it’s 4th year, I suppose it’s to be expected. What struck me over the whole weekend was the ambition and effort that the smaller bands put in to the self-promotion, with friends of the band giving out fliers and CDs to the crowd.

All in all, this is Strawberry fields in a little 5 point nutshell: 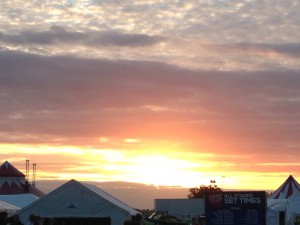 King Khan And The Shrines ‘Idle No More’ – ALBUM REVIEW