Friday, T IN THE PARK: I arrived later on in the evening, walking all the way through the campsite up towards the arena, all you can hear is filthy bass lines from all directions my eye line was awash with chavs out of their minds, beautiful girls in hot pants and wellies, flashing lights, comedy hats and flags. It’s good to be back in Kinross.

By far and away the loudest bass line on my radar is the main stage, Chase & Status in mid flow “jump jump jump” and the crowd are going nuts for them. It’s not my bag this stuff but it’s tremendous in this atmosphere. What a live show.

I managed to find one unsigned act called Darc. If you’re into the prodigy or something of that style then check these guys out. Plenty of huge samples, dirty bass etc… They have a live band as well, not just a geezer on his laptop. The band are playing the legendary King Tuts in Glasgow this Saturday coming. I highly recommend. 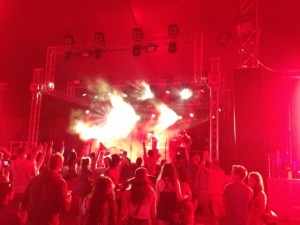 Headlining the T Break stage was The Merrylees. I know these guys, they play the same circuit as myself and quite frankly they are the band I came to see.

Their image is 70’s, I just wish someone would grow a tash! Their sound is folky/country…ish. Excellent clean guitar riffs leading the way in and out of melodies.

Their song ‘The Coroner ‘ plays with an immense riff and trumpet flaring all over the intro. Sheer class. Bravo lads ,bravo.

Calvin Harris was as expected.. Massive.

Flames, light show. One of the biggest stage shows for someone in charge of a laptop for the night. Honestly though, not impressed.

The unsigned acts for me were my highlight for Friday, especially the Merrylees, obviously not as big a crowd as the main stages but they were working hard and their slot was well deserved. 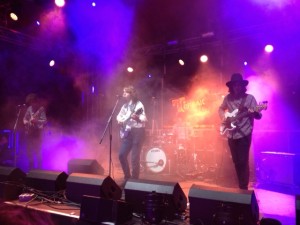 Gigslutz Blogs: Shakermake-up – should OASIS get back together?