Earth Wind & Fire open up the main stage today, not a massive crowd for a band of such legendary standing, but to be fair the vast majority were still in their tents nursing hangovers at this hour.  Lead singer Maurice White introduced the band, he knows that he is up against it with this crowd due to the fact that its simply not the correct generation.  Jokingly he suggests that most of the younger members of the audience were “probably conceived to our music”…’Probably’ true.

T in The Park roared with delight when they fired straight into Boogie Wonderland.  From then on, they pretty much owned the crowd and the morning.  This was the perfect start to the day. 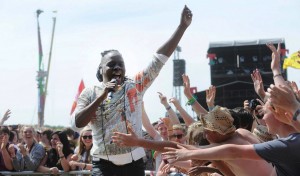 Next on my list was the mighty Ocean Colour Scene.  Now, I’m not going to lie.  I have seen this band 49 times… That might seem a little worrying,  on the other hand it is also little wonder given what a great band they are.  The crowd waited on the band appearing on stage for what seemed a lifetime in the baking heat and I didn’t realise just how big a crowd until I spun around.  Jesus, its worth of a headline crowd. Massive! 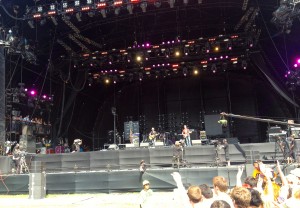 Opening with the flag ship Riverboat Song they immediately stole T in The Park.  I had to battle to stay on my feet with such an energetic crowd.  Just the way I like it.  The band ran through all the hits letting the crowd sing along where appropriate, Profit & Peace for example.  The biggest sing along came from ‘The Day We Caught The Train’, as expected.  Properly good set from OCS. 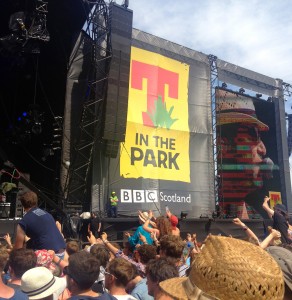 Shortly after I seen a chav fall over on his face due to, I expect a few to many G&T’s. This was a particular highlight, it was just a shame I couldn’t get my camera out quick enough to take a snap.  I di however take a snap of this guy making cool things with a chain saw. 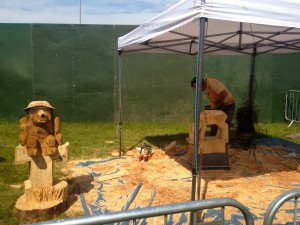 The rest of day was beautiful, a great day to kick back and soak up the sun, music and atmosphere. Its been a lovely weekend, the line up in my opinion wasn’t the strongest I have ever seen at Kinross, however it was all made better by a new and improved T.  The food was better, layout was better, car parking better. Hats off to that.  My one gripe is that no matter how good they are it should not cost £4.50 for a burger and then an extra £3.50 for chips and a £3.50 drink, no excuse for that T In The Park, you are rinsing good people who have already bought tickets.