The brooding psychedelic vibes to High Hazels – four lads from Handsworth, Sheffield – are the perfect prelude to the last night of The Crookes’ UK tour. Their mellow sound exudes confidence, and that’s not the only thing worthy of mention… Bassist Paul Barlow has seriously impressive cheekbones. Following them are a band who’ve come a bit further afield; The Charlestones bring their jazzy tunes all the way from Italy and we’re later told by The Crookes that “what they say about Italian men is true…” – ladies, consider yourselves warned!

Reassuring us that they’ve been home, showered and washed their clothes first, the dapper indie quartet The Crookes take to the stage of Leadmill ready to go. Ready to rock, apparently, according to a woman at the front who does “rock on” signs throughout – a first for the band, unsurprisingly given their sound comprises of poetic melodies rather than rock ‘n’ roll! Hometown gigs are really unbeatable – for band and fans alike – and midway through their set, frontman George Waite informs us the band has been looking forward to this Sheffield show for the past six months. 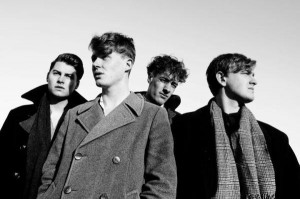 The venue is packed out with people of all ages which is definitely heart-warming; to see such a mixed fanbase signifies that The Crookes are a band who write pertinent songs about love, heartbreak and life which are relatable and enjoyable to all. In much the same way as the audience members are a mix of young, old and in-between, the setlist is comprised of a perfect balance of old and new material.

From the opener, ‘Play Dumb’, the crowd are on their feet and dancing.This belter is followed by ‘Don’t Put Your Faith In Me’, from 2014’s recently released ‘Soapbox’. With a galloping tune and simplistic chorus, it’s unsurprising that everyone is at the very least bopping in time to the track. George is shaking his head left right and centre and if you’re looking for evidence that the band are giving the final date of the tour their all then look no further than the sweat that is being sprayed onto the front row (lovely, compliments of the band!). ‘Chorus Of Fools’ is so upbeat and cheery it makes me want to break out into the kind of dancing John Travolta and Uma Therman do in the diner scene of ‘Pulp Fiction’, but I refrain because (believe it or not) I do have some street credibility to maintain.

A personal favourite of mine, ‘Maybe In The Dark’ sounds fantastic live; it’s combination of loaded lyrics (“All I need is a substitute / maybe in the dark she’ll look enough like you”) and Waite’s upbeat care-free vocal style has the crowd singing along, fuelled by a common feeling of angst. The next song to elicit such a collective response is ‘Sofie’ which is an old ‘un, from 2012’s release ‘Afterglow’; an upbeat shouty chorus has the Leadmill pulsating with sound.

Introducing ‘The I Love You Bridge’ in the same way as he does every time (“Who’s ever been to Sheffield?” *Unanimous cheering from the people of Sheffield*) George Waite croons about various places across the city. Having seen the iconic ‘I Love You Will U Marry Me’ graffiti in person the song manages to trigger that much more of an emotional response from me as I listen, crooning softly along with the band as they reference my high school – “Faith shook in romance / My imagination danced on the 38 to Notre Dame.” 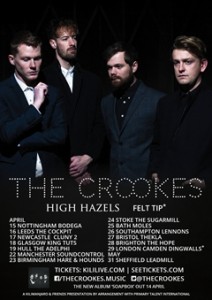 ‘Where Did Our Love Go’ seems like the perfect penultimate track before the band exit the stage, helping to build the evening to a crescendo thanks to jarring guitar melodies which are bound to be echoing in your head for days. When asked if we like loud music, Sheffield has only one response. Yes. Yes, we do. In fact we love loud music – and we love The Crookes. Enough to call them back on stage for an encore, anyway, and for one woman to ask George to marry her (he says, ‘Okay’. We hope they’re very happy together). Perhaps the only disappointing thing about the evening is the fact the band doesn’t come amongst the audience like I’ve heard they did during other dates on the tour. Then again, perhaps this isn’t surprising as the venue is well and truly packed.

We’re gifted the iconic ‘Afterglow’ as a parting present and everyone sings along. For such poetic lyricists it’s amusing that the expression “Fuck Me, Sheffield!” is the eloquent parcel of sentiment we’re left with.