Wednesday night gig slots are always difficult. Mid-week blues mean it can be tough getting off the sofa and braving the cold wind outside… but it’s important to remember that artists are always glad to see you. I guess you could say that The Feeling in particular ‘Love It When You Call’ (that was terrible, sorry). Despite these unfavourable odds, my decision to head down to the Leadmill turns out to be one of the best decisions in a long while, for boy, do The Feeling put on one hell of a show.

Support act, The Gentlemen, have me bopping along with every intention of going home and downloading their album ‘Departures’ – no mean feat for a support band, I’m sure you’ll agree! Two songs that stand out are ‘Words’, with its catchy riff and chorus, as well as ‘Jump In The Ocean’ which has summery, upbeat lyrics that make me want to don a swimsuit and have a water fight. (I suspect pigs will fly before that happens in the UK in March, though). Demonstrating an impressive vocal range, frontman Nicholas wins my heart in an instant. Not only are they a Sheffield band, but he punctuates their disco-pop vibes with the backstories to their songs. For me, audience interaction is vital to live music, so having aced this department I’m sad to see the suit-clad chaps exit the stage.

But I’m not sad for long – how can I be? The Feeling frontman, Dan Gillespie Sells, takes to the stage, launching into angsty ‘Blue Murder’, from their recently released album ‘Boy Cried Wolf’. Their second song is ‘Fill My Little World’ and has everybody bopping their heads, feet, whatever limb that isn’t holding a drink; an energetic atmosphere that doesn’t dissipate with ‘Helicopter’ – for despite singing the lyrics “my piano’s out of tune / I wish it wasn’t” The Feeling are musically sound, and I lose count of the seamless instrument changes that take place. 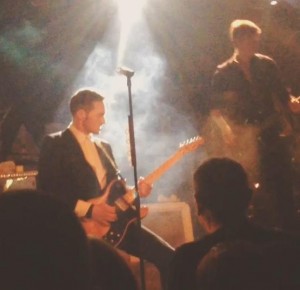 Sipping occasionally from the world’s smallest Guinness, it’s with great glee that Dan tells us he’s not meant to be singing – much less holding notes for as long as he does – given a recent cycling accident he was in. But I’m delighted that he’s defying his doctor’s orders, because his voice is enchanting as he croons ‘Fall Like Rain’ and ‘Rosé”, two slower tracks that showcase his vocal range and lyric-writing talent. A perfectly planned setlist ensures that the band’s new material is interspersed with the classics; ‘I Thought It Was Over’ and ‘Never Be Lonely’ are next on the bill. I think you’d be hard pressed to find an individual who doesn’t at least know the chorus to these feel good, infectious pop melodies.

Dan stresses how glad the band is to have had “no bullshit” from their record label in production, this time around (although not before checking there isn’t a representative in the audience, first!) and I get the feeling (ha) that every track is as much of a joy to play as it is to hear. Their single ‘Sewn’ has people swaying along, but it’s the Encore that really sees people going for it. Unsurprisingly, Dan name-drops the fact that the band played at Buckingham Palace as part of the Coronation Festival last year, before imparting their fantastic Brit-pop medley consisting of ‘Day Tripper/You Really Got Me/Pinball Wizard/Under Pressure/Another Brick In The Wall/Park Life’ which they crafted for this prestigious occasion. Credit to the London band, it’s a fantastic homage to British musical heritage. But it wouldn’t be right if they didn’t play ‘Love It When You Call’… which of course they do, to a tremendous amount of applause.

Interestingly, they don’t leave us with this raucous Top 20 track. Instead, they close with ‘I Just Do’; the lyrics “He said: “I’m not an asshole” Something of course only an asshole would say” conjure a wry smile from everyone around me and the simple chorus guarantees everyone sings along in unison, before they spill out of the venue. The Feeling that we’re left with is warm, fuzzy and tinged with regret – but only because it’s time to go home. 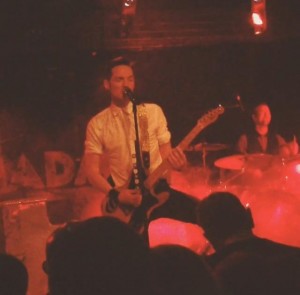 Gigslutz 1st Anniversary Special: Do You Remember the First Time?