There’s nothing quite like a trip to Brighton to ease the soul.

Always the destination of choice for us as a group of farah clad teens back in the day. Stereo pumping out mod classics all the way down on the train.

I always feel as you approach the station that the cliffs and walls on the right seem to be the city opening it’s arms and somehow to me make it feel like you’re arriving on an island cut off from the monotony and furrow browed UK.

It was my first visit to The Great Escape; and I wasn’t really planning to see many acts as I had so many meetings in the short time I was there.

I met Del Barber’s manager Michelle from Paquin Entertainment and she was a real joy to spend time with. Empathising with the pain and loneliness that is being an artist manager! But that’s another story. I was to be interviewing Del on the Friday but he was arriving late so that mantle has been handed over to the blonde rocket that is Gigslutz’ very own Jam Luckhurst. So we look forward to that. Del is a Canadian singer songwriter and was supporting Billy Bragg on Friday. He is it seems one of the true nice guys so I’m gutted I didn’t get to meet him. Check his biog video out on YouTube. Lovely stuff.

I met up with all sorts of interesting people including the chaps from Hijacker Records who have a burgeoning dance festival called the UV festival out near Gatwick and we’ll be doing a piece on them pretty soon. Cheers Chopper!

I also had a pint with Mick who owns the Pelirocco Hotel. One of my favourite places to have a drink in the world. If you’ve never been there then rectify that as it a true hidden gem with boutique style and unique one off design rooms. Plus a bar that’s got a real keep-it-in-the-family vibe. 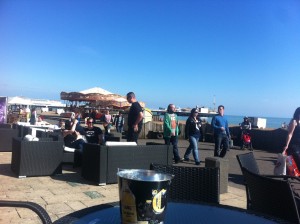 I was travelling back on Friday as I had tickets for the Fela Kuti tribute gig hosted by Ginger Baker. But before I left I sat on a deckchair at the Festival Hub area where people can watch bands for free and caught the first few tracks of a band called the Dunwells from Leeds. They seemed to really be enjoying the chance to play and the harmonies and musicianship were really uplifting. Every tune I saw had a enthusing vibe to it and although they’re not really my thing, the structure and accessibility of the tracks would make them the kind of band that could follow the Mumford route. 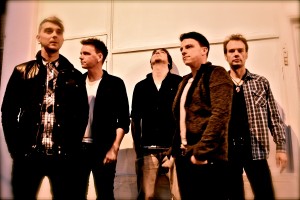 They’re the sort of band that British snob journos would pass up as they’re not “doing something different” but they can play, they can carve out hooks and catchy choruses and I have a feeling they know exactly what they’re doing and why.

Liam Gallagher caused me to do the double take of all double take WH Smiths at the station. Seeing as he was on the front of Q dressed as an astronaut. Liam mate, please. 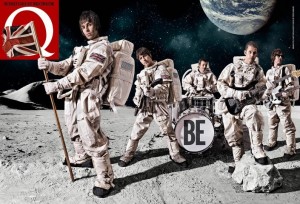 Last word is in conjunction with my ‘name n fame’ section of my blogs where I give props to someone who has served me on my travels and done it with a smile, manners and panache! This one goes out to Sophie Lennon who works at The Dorset pub in North Road. Bless you Sophie! Amazing pub, gorgeous food and great music.

Most of all, thanks to Brighton for one of the loves of my life, always flashes it’s garter, gives you a warm embrace and sends you on your way full to the brim.