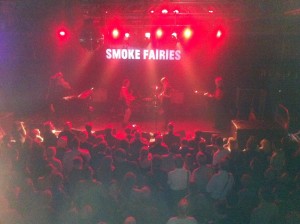 The Smoke Fairies have been making some pretty good mates lately. They recently became the first UK band to release a record on Jack Whites new label. Jack was into them that much he ended up producing their single and also jumping in on drums for the track. Not bad. They’ve also supported Bryan Ferry and they are adored by flavour of the month Richard Hawley who had personally invited them along on his tour describing them as “frankly the best thing I’ve heard in years”. Anyone who is as highly regarded by that lot must be worth butchers so we headed down to Kings College to find out what the fuss was about.

Although sitting somewhere in the folk category they would not normally be what I would listen to, I was pleasantly surprised. There is plenty to keep your eyes focussed on, on stage. At the back you have the standard beat keeper whilst out on the left wing you have the bassist who is sporting the best hair / tash combo I’ve seen in years (think an extra from dazed & confused) and on the right wing you have the lanky jack of all trades who makes every instrument he plays look tiny. Then up from you have the star partnership of Katherine Blamire and Jessica Davies. Jessica would be my favourite if I had to choose but I wouldn’t kick either out of bed…

It’s obvious they are all very talented musicians and the musicship between them all is something to admire. All sorts of fiddles and drums were making an appearance to complement the tasty harmonies. Their on stage patter left a lot to be desired however, as did the crowd who seemed to have been transferred straight from a Richard Hawley gig! (Check out the Hawley review if you have no idea what I’m referring to here) Anyways, tunes ‘Blood Speaks’ and ‘Strange Moon Rising’ more than made up for any negative aspects. Although they were sold as folk, there is heavier stuff in there too and it would be difficult to pigeonhole into one genre.  Impressed.

Their 3rd album ‘Blood Speaks’ is out now, check it out and keep your eyes peeled for a GS interview coming soon!