Rock n Roll club night, ‘This Feeling’ has played host to many a party up and down the country over the years with line ups showcasing the very best of up and coming talent under the watchful eye of already established rock n rollers in the audience. Attendees of this “mad 60s carnival” (Serge from Kasabians words, not mine) have included the likes of the aforementioned Kasabian both Gallagher brothers the odd Libertine and anyone else you can think of that likes a drink, a dance and is fucking cool! 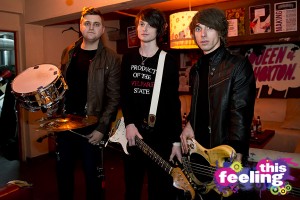 As I’m writing this it has to be noted that the night has left me somewhat feeling sorry for myself and I couldn’t force myself out of bed until 3 in the afternoon, it was that good!

As we walk into the Queen of Hoxton we are greeted with a DJ spinning tunes from  The Rolling Stones, Oasis, The Verve and the Arctic Monkeys. An absolute dream playlist for any regualr gig goer with half an idea about good music. We make our way downstairs to check out the bands on the line up, and they come thick and fast leaving barely enough breathing space for a toilet break and a trip to the bar for what seems like a never ending stream of lager and Jäger. But the onslaught is a welcome one with the highlight coming from Dexters who are no stranger to this club night, having performed at the night several times since kicking the arse out of the scene with their debut EP. The good people at NME have described this band as “Brash guitar anthemia of the very highest quality” and to be honest their not wrong. This band are going to go on to big things with 2014 shaping up to be a top year for the local lads. 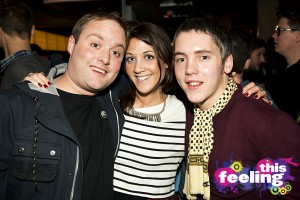 Other bands gracing the stage this evening include Trampolene, The Tapestry, Storms, The Bohicas, Pusher and The Struts all bringing their own take on guitar music and absolutely smashing it whilst doing so. There’s enough hair cuts, Fedoras and Fred Perry knocking about to fill the whole of Manchester. No matter where you walk in this absolute beast of a venue the tunes coming every room make you want to strut around like your Mick Jagger at Hyde Park in the 60s.

As the bands finished and the DJ kept the tunes going the night becomes more and more hazy with brief memories slowly coming back to me the morning after which includes brief flashbacks chatting with some of the Soccer AM lads and more and more Jäger.

No matter where you are in the country a pilgrimage to one of these nights is an absolute must.

All bands who played the night, and also bands from previous events have free downloads available from the This Feeling website. GET ON IT HERE