3pm marks the time of departure. It’s 10 hours to Denmark, with a good old ferry to break up the long haul journey. It’s 3pm and Peter’s in a guitar shop across the road. Since 1pm we’ve been playing Coronation street trivia and attempting a punk rock quiz, but Brucie effortlessly calls the answer before i’e even finished with the question.

There’s dipping and diving in and out of sleep for the majority of the way, those few hours I’m awake I stare out of the window at the acres of trees coated in snow, whipping past as if printed on a zoetrope.

Trying to sleep can be an arduous task. If it’s not the faint strumming of guitars from the tour bus band in the lounge, it’s the thumping of tireless feet marching up and down the isle, shoulders pulling back curtains causing pissed off groans and moans. 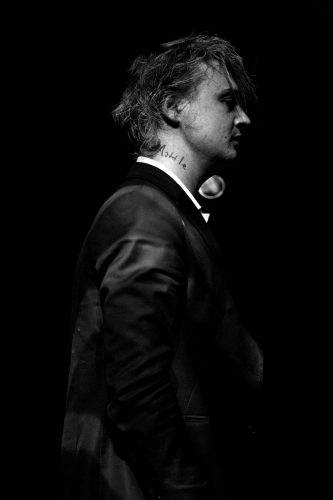 But there’s always a point when we all settle down, and that’s when we have to jump off onto the ferry. Number 34 on the driver’s rule book states everyone must get off the bus onto the ferry. Apparently its also a tough rule here in Scandinavia and we’re all happy to oblige, with the exception of Peter and Katia who really haven’t slept, it’s never usually an issue so they stay on board to sleep as we tumble on deck.

It’s cold salads for dinner, not quite what we were expecting but it goes down well with the jugs of beer piling up on our table. Brucie is fast asleep in the kids area, Rafa has pulled cushions from the wall, making his own little man cave in the corner of the deck. Miki is building her newly bought lego dinosaur, snacking her pocket full of parmesan cheese we stole from the kitchen, in a hunt for hot food.

It’s one lovely family day out, but the driver isn’t happy about a certain someone being on the bus. Now we know it’s best to just… ignore the problem and keep people happy. But driver has told the crew and now there’s an issue bubbling away in the pan, awkward looks from us lot scream “you don’t know what you’ve got yourself into, mate”. 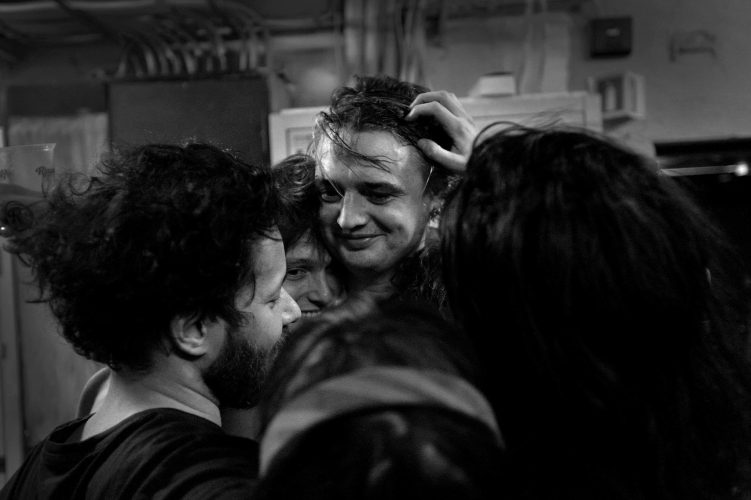 Two security guards have made their way onto the bus, one even has a baton which is quite funny, and after threatening to take away Peter’s lemoncello, and apparently a quick  change of tone, they’re both on the boat.

The spirits have now doubled up and Peter is taking full advantage of the arcade. There’s talk of revenge for the bus driver and we all laugh as if it’s a joke, knowing full well some tracks will need to be covered later on in the night.

We’re back on the bus and it’s not far off a riot. The door to the driver’s pit is being opened quickly for Peter to shout “GRASS” at the top of his lungs. Nevertheless it’s all light-hearted, though next time the driver really should let sleep continue on the bus.

Peter passes out in a cupboard, yes, literally, and after a few minutes of entertainment he’s back in his bunk for what will be a long sleep. A few of us stay up for a little while and after a some sleep we arrive in Denmark. We settle in and ransack the catering, merch is set up and John Hassall and his band The April Rainers arrive. 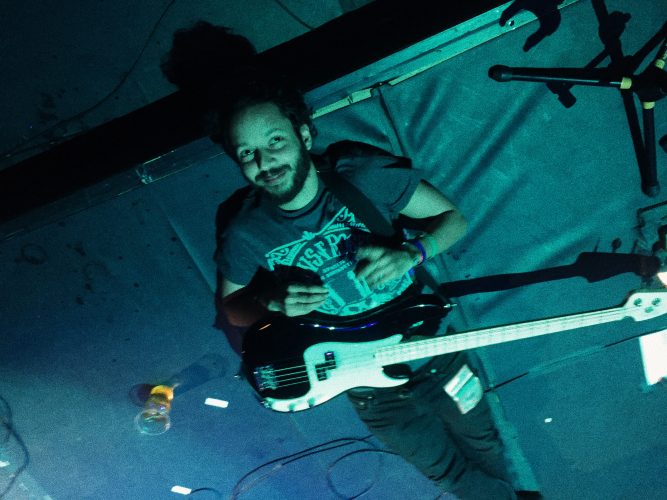 It’s always a pleasure to see John, who lives in the very town we’re playing in, Aarhus. Peter wakes up minutes before the stage and pushes John’s wife Line on stage for some poetry. One poem recites the story of meeting someone at a party at Alfred Hitchcock’s house, after Peter confirms it was John, the crowd swoons and the show begins.

It’s already been made apparent that this gig is going to be a show-stopper. Songs are dedicated to John and Line and The Foundation’s ‘Build me up Buttercup’ is the summers-day sing a long. It feels special to be at a gig with another Libertines member here, it seems to be an opportunity for Peter to show his love for John, letting us all into the special bond they both hold.

After the show we clamber back on board dragging John along with us, I pass out but it’s not long before I’m woken up, but that’s tomorrow’s story and I’m all out of words for now…