Chaos and madness aside, one thing that 2016’s been fantastic for is its musical offerings. Mari and Mel have picked some of our favourites that have been featured on this year’s Tracks Of The Week, and put together a nifty playlist, to remind you that if all else fails, we’ve always got music…

Having toured with the likes of Let’s Eat Grandma and received plenty of airplay from BBC 6Music, London band Girl Ray instantly captured my attention with their first physical release last month.

A wonderfully scuzzy, uptempo offering, ‘Trouble’ is an impossibly catchy slice of kooky “off-kilter pop”. Oozing twinkling melodies alongside chilled vocals and rich harmonies, it’s a track that will linger in your ears long after first listen, and leave you eagerly awaiting what sunny delights Girl Ray have in store for us next year.

‘Trouble’ was Girl Ray’s first physical release and came with B-side, ‘Where Am I Now’, out now via Moshi Singles Club.

Following the release of his magnificent album Grapefruit earlier this year, Manchester’s Kiran Leonard’s follow up track to the LP was equally wonderful.

‘Coyoacan’ tells the tale of “Trotsky and his wife, at home in Mexico City, lamenting infighting on the left, in spite of a beautiful world rampant with tyrants”– a typically profound and insightful offering from the young songwriter.

Although ‘Coyoacan’ is filled with the intellect and passion we’ve come to expect from Leonard, and his distinctive intense, heart-rending vocals, this track appeared to signal a slight change in musical tone. Flowing with glitchy sounds and twinkling percussion, it’s a beautiful cacophony of eclectic, disjointed sounds.

Also one of my live highlights of 2016 (I was lucky enough to catch him at The Victoria and The 100 Club this year), Leonard is an incredible artist who continues to captivate and impress with each of his unique offerings.

Having formed at art school in Brighton, London-based musicians Alice Go, Bella Podpadec and Rakel Mjoll – aka Dream Wife –  have been making waves in the world of new music this year, with a debut EP out and wowing crowds across the country with their vivacious live shows.

‘Kids’ is a wonderfully uptempo track, filled with sweet, hazy vocals, catchy hooks and zig-zagging melodies. Reminiscent of the likes of Best Coast, or even (one of my favourites) upcoming band The Orielles, ‘Kids’ is a scuzzy slice of sunny surf-pop; a delicious treat for the ears.

Dream Wife are a band that demand your attention, and, as great as their recorded tracks are, you need to witness the charisma, wit and sheer power of their live performances. I was lucky enough to catch them at Visions Festival this year and they blew me away with their enthralling playful charm, as they fused together their sugary surf-pop melodies and raw punk sounds to perfection.

The self-titled debut EP from Dream Wife is out now.

After a ‘Dave Grohl’ incident, which saw Peyton Bighorse (one half the step-sister duo) end up with dislocated knee and a torn ligament, Skating Polly proved they were well and truly back in action this year, with the release of a new album and some fantastic live shows. In April, Peyton and Kelli shared the first track from the album, ‘Oddie Moore’ – and it was love at first listen.

The raucous sound this duo can create is just incredible. As the incessant pounding of drums races alongside scuzzy bass lines and raw vocals, Skating Polly deliver intense offerings filled with honest emotion and riotous energy.

Described as being like “throwing my journals out for anyone to read”, ‘Oddie Moore’ is filled with an intense, raw emotion. Though the band brand themselves as ‘ugly pop’, there’s something rather beautiful about the complete unwavering intensity of ‘Oddie Moore’.

Having been pretty much addicted to their latest album, as well as falling further in love with the duo at their intimate show at The Lock Tavern, I have no doubt that Skating Polly will continue to impress in 2017. With their raw honesty and disregard for society’s expectations, they deliver an empowering sentiment, uniting not only young girls, but anyone who doesn’t always want to coincide with the confines of society’s limitations.

The Big Fit, the latest album from Skating Polly, is out now on Chap Stereo.

Following the release of their spectacular self-titled EP earlier this year and with a new EP set for release in Spring of next year, Hawk returned last month with their powerful and captivating noir-folk sound.

Flowing with the sublime beauty and subtle power of Julie Hawk’s distinctive vocals, ‘Mirror Maze’ challenges the conflicting expectations society places on women’s bodies, as the band once again manage to combine their graceful musicality with powerful political ideas.

Oozing a sweeping, gritty power alongside haunting ethereal vibes, ‘Mirror Maze’ shows that Hawk are ready to take on the world with their spellbinding sounds and inspiring ideas.

We were lucky enough to have Hawk deliver a captivating headline set at our Blogtober event at The Finsbury in October, and we can’t wait to hear what this consistently impressive band have to offer us next year.

She Knows, the upcoming EP from Hawk, will be out 17 March 2017 via Veta Records. 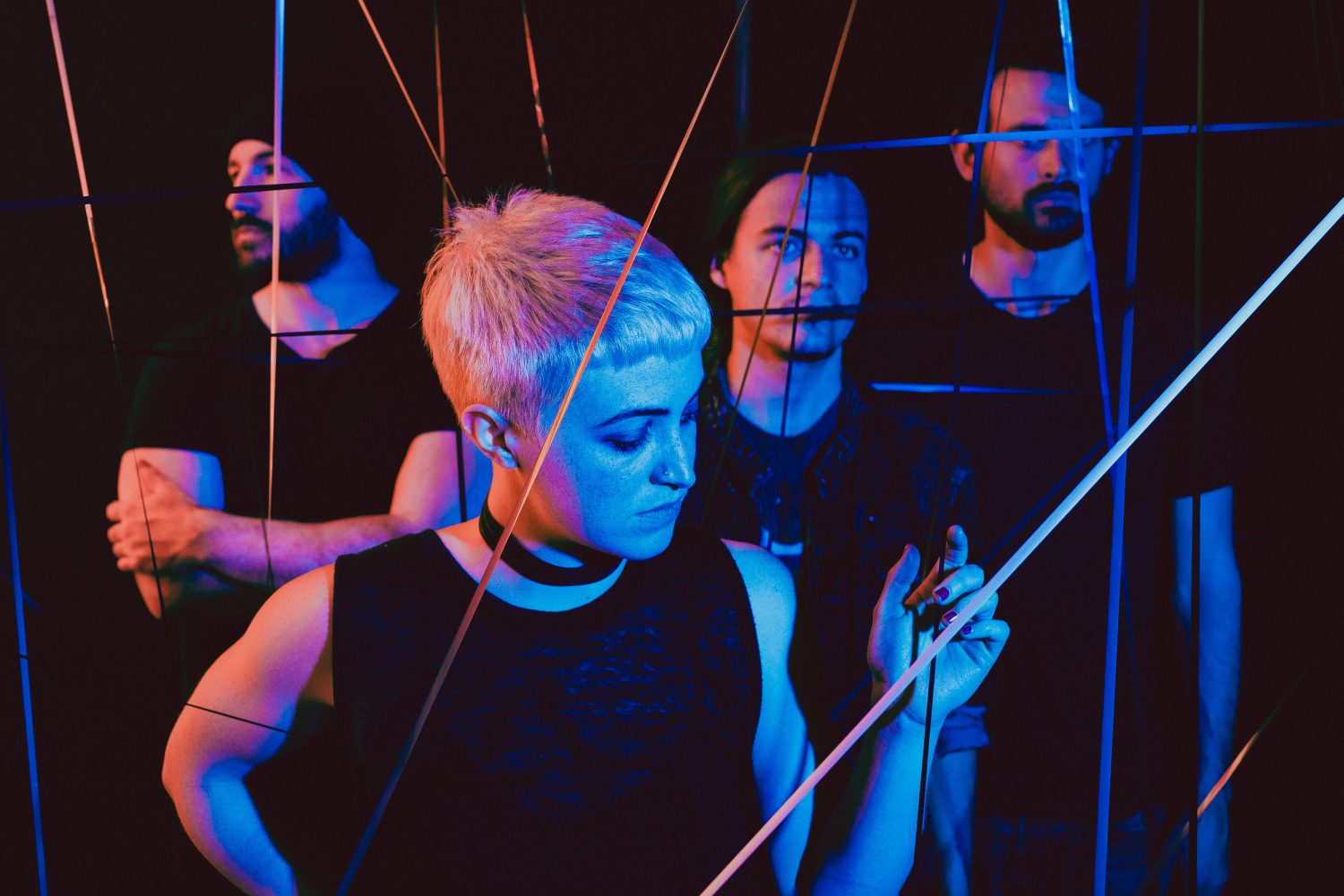 We all know the feeling of lacklustre love affairs. As Anteros’ frontwoman Laura Hayden says: “We’ve all been bored by someone who is too self-indulgent”. What we can’t all do, however, is express it quite as beautifully as Anteros do, in new single ‘Breakfast’.

Written last summer, ‘Breakfast’ has been described as The Cure, meets The Cardigans, meets Beyoncé; what more could you want?! Lyrics “Say you wanna talk, wanna work it out? / Well good luck, my head just touched the clouds” floating over a sun-drenched riff, the track is in equal measure relatable, energetic and cheerily nonchalant. The perfect summery anthem to remind us that we’re not alone in societal pressures and mediocre relationships.

Since ‘Breakfast’ came out, Anteros have been taking over festivals, winning over hearts and securing themselves on every 2017 ones to watch list.

Breakfast EP is out now .

Stemming from the Wirral, Pure Joy span genres, fusing American psych, garage-rock, British pop – the list goes in – the result being their own brand of psych-rock.

On ‘Girl’, the band’s dreamy vocals are paired with whirling guitars and a general sparkle that gives the track a real sense of summer. Perhaps the main purpose of psych, ‘Girl’ is so hugely atmospheric that it’s tricky for your mind not to drift – just a small suggestion of the journey the album will take listeners on.

Since March, Pure Joy’s debut album Bang Flower has hit and the band have enjoyed an abundance of live dates, taking over Europe last month.

Bang Flower is out now.

Taken from their album No Illusions, this track from London quintet SULK is, quite frankly, a dream. ‘The Tape of You’ combines The Stone Roses’ sun-drenched, summer-ready swirling guitars with a healthy dose of London cool. Call it 90s revivalism if you will – I won’t deny their clear influences – but with ‘The Tape of You’ it’s clear that SULK are dead-set on making their very own sound.

With its psychedelic undertones, mixing the best parts of their influences with their own agenda, the track drags the 90s firmly into a future: a future where I’ve no doubt SULK can be found playing their dreamy, shoe-gaze to a packed-out Hyde Park.

No Illusions is out now.

Taken from Sorority Noise’s EP It Kindly Stopped For Me, the Intimate and haunting ‘Either Way’ is a sort of beautifully crafted stream of consciousness from front-man, Cam Boucher.

Dealing with the loss of friends and mental health is something that’s tricky to put into words at all, let alone turn into a track and release it to the world. Yet ‘Either Way’ is beautifully delicate in touching on such issues, the sombre tones paired with a sort of Cali sunniness: ‘Either Way’ is, I’d imagine, the dose of calm that everyone needs on a bad day. With lyrics like “I can be more than my head let me believe”, it truly is a glimmer of hope wrapped up in an endlessly smoothing track.

Since April, the band have made the most of touring, and made their first venture to the UK.

It Kindly Stopped For Me is out now on Topshelf Records.

Virgin Kids – ‘Be Your Friend’

With its accompanying video dubbed by DIY as unofficial ‘Best Video Of The Year’, Virgin Kids’ ‘Be Your Friend’ certainly isn’t a track that should be slipping under the radar; though I can’t imagine it will.

A combination of garage-pop grittiness, nostalgic sweetness and a nonchalant charm that seems to radiate not only from the band themselves but somehow from the track, ‘Be Your Friend’ makes simple, almost nonsensical lyrics seem to make sense, and makes making friends so much easier; just send them this track!

For all its charm and sweetness, ‘Be You Friend’ is actually immensely cool. DIY were right. After the success of Greasewheel, we’re excited to see what 2017 has to offer for Virgin Kids.

Listen to our Tracks Of The Year playlist:

WATCH: Dear Reader – ‘I Know You Can Hear It’