Lunar Festival, set in the heart of the English countryside, yet a mere 20 minutes from Birmingham, has today announced it’s live headliners and supporting artists.

Taking place in the Umberslade Estate, Warwickshire, the location’s Alice in Wonderland-esque name seemingly matches the eccentricity of the festival itself. Taking pride in ‘joining the dots’ across everything from funk, soul and jazz to African sounds, electronic odysseys, indie, pop and rock, the festival this year holds host to a fantastic selection of names.

Cancer-free and as strong as ever, Wilko Johnson heads the festival, joined by Tinariwen, who will be bringing the sounds of the Sahara Desert to the festival.

Also joining the lineup are Amazing Snakeheads, Syd Arthur, Julian Cope, The Bootleg Beatles and many more acts spanning all the genres you could ever wish for. It’s charming peculiarity is mirrored in the lineup: if Wilko doesn’t cut it for you, My Brightest Diamond‘s blend of opera, cabaret and rock, or the acid jazz/hip-hop/funk fusion of Heliocentrics might just do the trick.

While it’s only in it’s second year, the festival’s lineup is admirably strong; with it’s family friendly, enchanting nature, Lunar definitely isn’t one to miss. 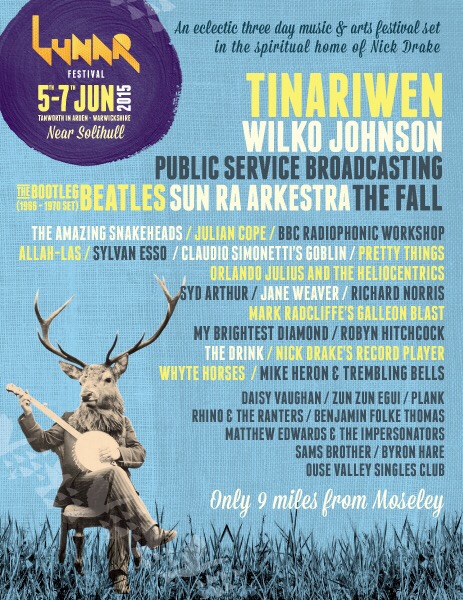