As my football team is so shit I’ve unfortunately never been able to take on the delights of European away days. However, since the resurrection of The Stone Roses I have had an excuse to pack some spare Bill Grundies and a toothbrush in an overnight bag and follow hero’s of a different employment around random European cities.

After witnessing some mind blowing shows in Amsterdam, Lyon, Milan and Manchester, not to mention getting access to the 600 capacity secret gig at London’s Village Underground, this time around it was time to hit Belgium’s Pukkelpop festival.

The trip to Belgium started early with the 6.50 Eurostar to Brussels via a big tunnel under the sea. As soon as we emerge from the other side we are officially abroad therefore, despite still being pre 8am, it’s time to start on the ale. Just over 2 hours after leaving Kings Cross we are in Brussels where we change to go Liege and have an hour to kill before the next leg of the journey. Over a pint we discuss what exactly Belgium is famous for; chocolate, beer and erm… well the only other things we could add were being in the middle of Holland and France and paedophiles. I’m not sure how much fame is brought on by the last one, however I took Johnny’s word on this…

From Liege we’re back on a train and head over the boarder to Maastricht and straight to our hotel for the night. Or to be precise, Botel. That’s right, a hotel on a boat. We realise at this point that we have been through more countries in the day, than we have had beers so we sat down portside and tucked into a few more ales to average out that ratio.

We headed back over the boarder into Belgium and up to the town of Hasselt by taxi and to the festival. It has to be said it’s a great festival is Pukklepop. The dance tents were brilliant, it’s easy to get a beer (although literally all they serve is beer), good varied line up and plenty of action going on through til the small hours. One major disappointment however was when we had found a nice area to relax by the main stage then fucking Keane came on playing their MOR bollocks so we had to up sticks and move.

After the sun had set and we had taken in Granddaddy and some random European DJ’s we headed back to the now Keane free main stage for the Roses. Once again, as at every show I’ve taken in they were amazing. No faults at all, brilliant set list, the 10 minute Fools Gold with Mani’s funked up intro, the Ian Brown rap, just listening to Reni is worth the entry fee alone, Squire throwing in riffs all over the shop, just brilliant. You wouldn’t have thought it though considering the overly subdued Belgian crowd.

The roses set was

After we recapped on another triumphant Roses show, as it seemed out of nowhere Chase & Status burst onto the main stage and seemingly turned the volume up a few notches, whacking out their grime dance. Normally I’d have been up for a bit of this, however the ale consumption had reached a plateau at 20 hours and it was about time we got out of there.

So after a spot on naked dancing (trying to wipe that from my memory) we embarked on the return journey. Starting with a bus journey back to our boat. Why Michael decided to get off around 40 miles from the boat for a piss, then subsequently wave the bus on I’ll never know. For the most intelligent man I’ve ever met, that was thick as fuck. A bit kip then back our botel then back on the ale through the towns of Holland Belgium and France before back to England in time to catch the full time football results.

My lot actually got a half decent result for once, but who needs a successful football team when you have trains, boats and the stone roses…. 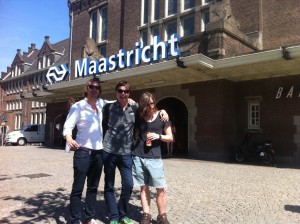